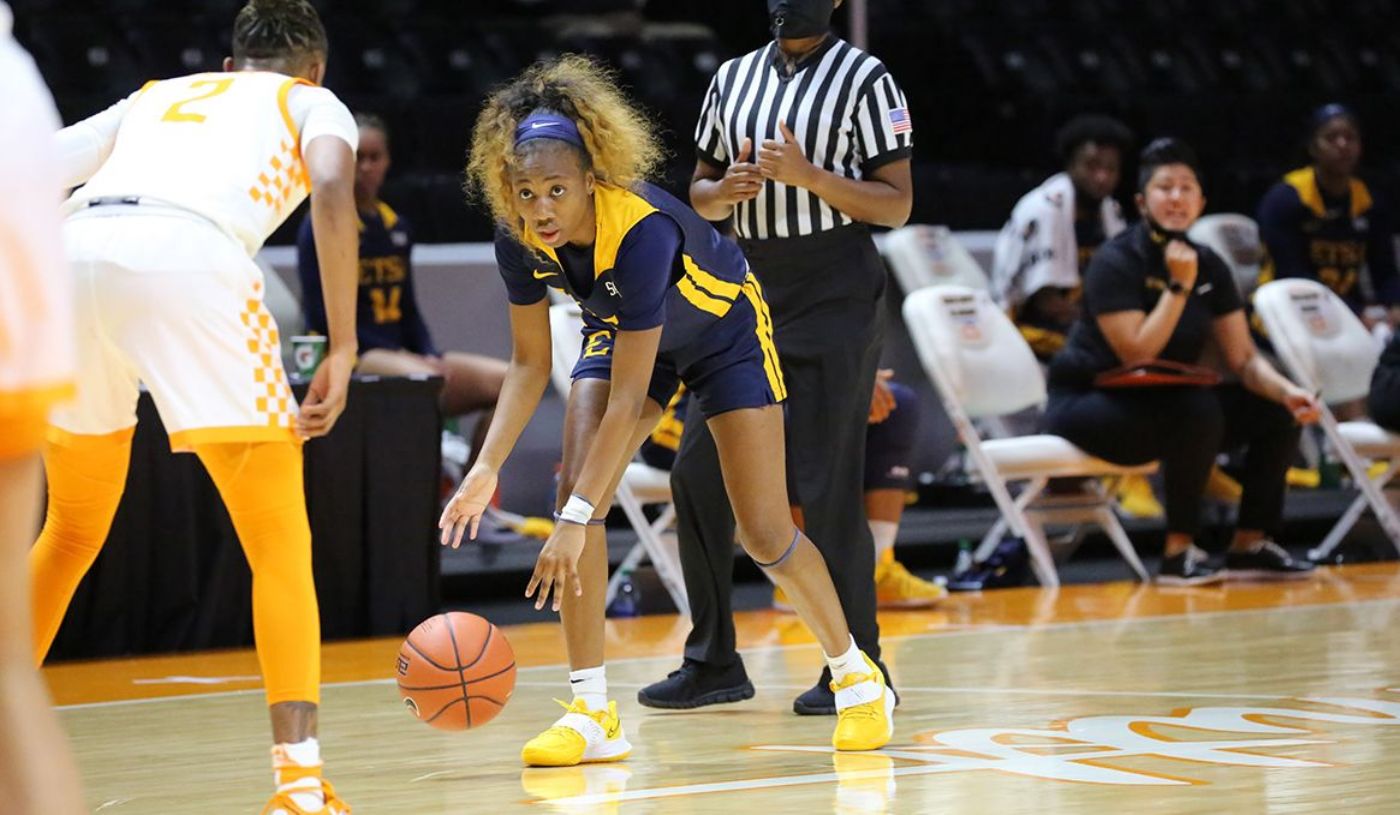 KNOXVILLE, Tenn. (Dec. 1, 2020) – In a rematch of a season-opener to remember just over a year ago, the ETSU Women’s Basketball team were unable to duplicate their efforts, falling to the Lady Vols 67-50 in Thompson-Boling Arena Tuesday evening.

ETSU falls to 1-1 on the season while their SEC opponent move to 2-0 early in their campaign.

The Bucs didn’t have their best night from the floor, shooting just 18-56 (32.1%) from the field and 4-16 (25.0%) from deep. ETSU did grab 10 offensive boards despite being heavily outsized by the Lady Vol lineup. The Buccaneer defense forced Tennessee into 24 turnovers, only able to capitalize with 11 points off their takeaways.

Upton opened the scoring action for the Bucs, grabbing the first four points for the Johnson City side. The hosts found it hard to break the Buccaneer defense down early, and Shynia Jackson (Warner Robins, Ga.) was able to cut the deficit to one in the first possession after the media timeout. Stafford followed suit the next trip down, converting an and-one opportunity to tie the score up at nine apiece. The hosts finished with a 5-0 spurt before a pair of Courtney Moore (Gainesville, Fla.) free throws cut the lead once again. The hosts, however, grabbed the last four points to end the quarter with an 18-11 lead.

Despite early attempts to extend the lead for the Lady Vols, the Buccaneer offense produced through the hands of Dowdell and Stafford. Tennessee were able to break through, grabbing a double-digit lead heading into the second quarter media timeout. A perfect transition off an Amaya Adams (Kansas City, Mo.) defensive rebound saw the junior dish it right in path of an oncoming Davis for an easy bunny to cut the lead back to 10, but the Lady Vols found an answer. Scoring eight of the next 10 points, the Lady Vols extended the lead to as much as 36-20 before the freshmen made a mark. An opening bucket from Hooks before back-to-back buckets by Davis once again narrowed the margin to 10. Hooks then found another of her freshman cohorts, Imani Williams (Kankakee, Ill.) dropping in a tough shot with her opposite hand as time expired to enter the break trailing 38-28.

After her impressive season-opener performance, Davis paced the Bucs for eight first half points against the SEC side. Stafford and Upton followed with five and four respectively, as eight different Bucs got on the scoresheet in the opening 20 minutes. ETSU entered the half with only a -5 difference on the glass against the side with all but two players registered at six feet or taller, while forcing the Lady Vols into 10 turnovers.

While the Buccaneer defense started the game frustrating the Lady Vol offense, the home side found an early gear in the second half, scoring the first 10 points of the third quarter to double their advantage. Following a timeout, the Buccaneers rattled off 10 of the next 12 points to answer the call, using five different scorers in the run. Heading into the final frame the Bucs trailed 55-38.

The two sides traded points throughout the majority of the fourth quarter, the Bucs using a young side primarily full of freshman. The rookies proved up for the challenge, forcing four turnovers in the final four minutes. The strong finish proved to be consolation only, as the Lady Vols continued their remarkable non-conference home streak against mid major programs with a 67-50 win.