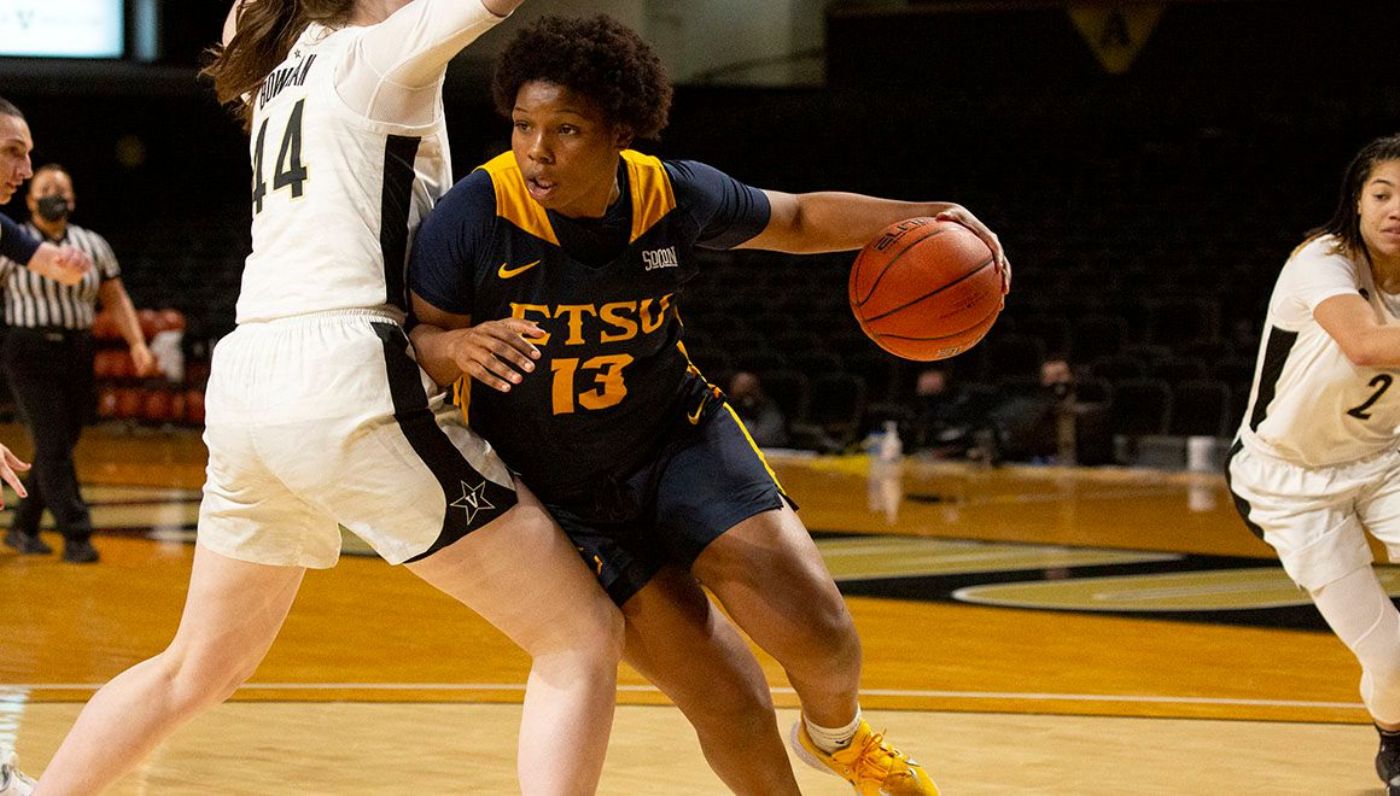 NASHVILLE, Tenn. (Dec. 8, 2020) – Four years to the day after giving a scare to the Commodores inside Brooks Gym, ETSU Women’s Basketball had upset on their mind heading to Vanderbilt Memorial Gymnasium in Nashville, and while they’d give the SEC side a run for their money, Stephanie White’s squad wouldn’t let the Bucs gain their long-awaited road revenge, using a big third quarter to prevail over Brittney Ezell and Co. 81-61 Tuesday night.

ETSU would open the game brightly, closing the first quarter on a 10-0 run behind a pair of scores from Carly Hooks (Atlanta, Ga.) and a solid start from Shynia Jackson (Warner Robins, Ga.), who made her first two field goals of the game, doubling her total from the first two contests of the season.

While the quarter would change, Jackson’s strong play would not, the junior forward stepping outside to knock down her first triple of the season, minutes later taking to the paint with a baby hook that would stop a 15-5 run that gave Vanderbilt a slim lead.

The Commodores would withstand the strong first half play of Jackson, though, outscoring the Blue and Gold 27-15 in the second quarter behind 10 second stanza points from Enna Pehadzic and seven from star Koi Love, the duo combining for 28 of Vanderbilt’s 38 first half points. Still, despite the Commodores finishing the first half on the front foot, ETSU trailed by just seven.

The third quarter, though, would have a decidedly different feel. Storming out of the locker room, the Commodores caught fire, shooting 55 percent from the floor while knocking down a trio of threes and putting up 28 points, their most in a quarter this season. Contrastingly, the Bucs weren’t able to sustain the offensive success they showed in the opening 20 minutes, getting only a Courtney Moore (Gainesville, Fla.) three to go down from the field in a third quarter that saw the Bucs score just seven points.

The fourth quarter would see the Blue and Gold get back on track on the offensive end as seven members of Ezell’s roster found the bottom of the basket, including the first field goal in a Buccaneer uniform for freshman Abby Carrington (Westlake, Ohio) and junior transfer Ashawntae Brown (San Antonio, Tex.), but the deficit was too much for the visitors to overcome despite outscoring the host Commodores 23-15 in the game’s final frame.

The Commodores were paced by Pehadzic, who knocked down six three-pointers on her way to a 25-point evening, while Koi Love logged a double-double in the victory, stuffing the stat sheet with 19 points, 12 rebounds, three blocks and four steals, the pair ensuring ETSU would receive the same result they did the last time the programs met on Dec. 8, 2016, a tight 80-72 result.

ETSU is back on the court Saturday for their home opener against Presbyterian, a noon start inside Brooks Gym.