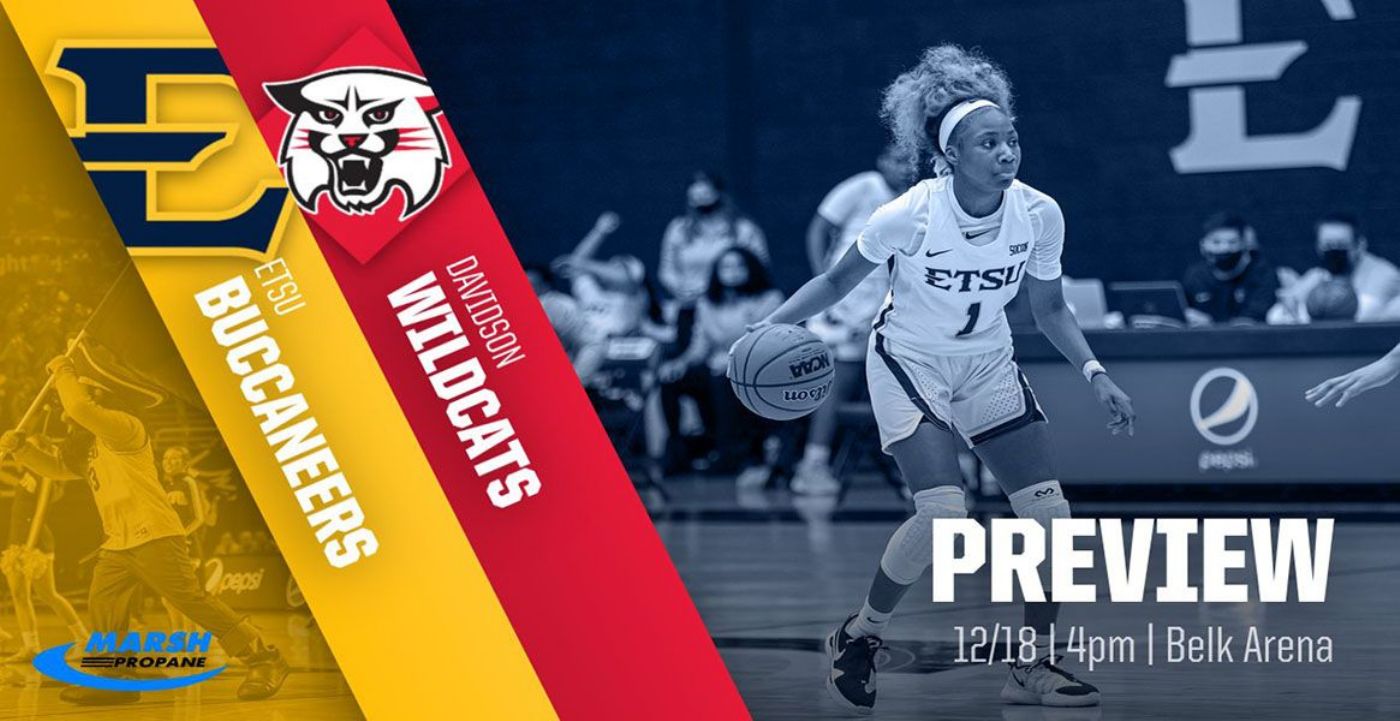 JOHNSON CITY, Tenn. (Dec. 17, 2020) – The ETSU women’s basketball team looks to get back in the win column Friday afternoon, heading on the road in a battle against Davidson inside Belk Arena. A return trip from last season’s matchup between the two, the Bucs look to get revenge on the side that played spoiler inside Brooks Gym last season.

ETSU looks to snap their three-game losing streak at Davidson on Friday after succumbing to Presbyterian in their home opener last Saturday. The Bucs had a shooting day to forget, knocking down just 14-66 shots as the Blue Hose spoiled the season debut in Brooks Gym in 68-38 fashion.

Four games in, the Bucs are finding some new faces to lead the offense. Sophomore Mykia Dowdell (Oak Ridge, Tenn.) has been productive in the early stages of the season, and in efficient fashion. The MTSU transfer is averaging 8.5 points per game, including shooting a conference best 60% from beyond the arc while leading the Bucs in field goal percentage. Jakhyia Davis (Knoxville, Tenn.) has also been strong in her collegiate debut, the freshman averaging 8.3 points and 6.3 rebounds per game. Kaia Upton (Nashville, Tenn.) continues to lead the team in both steals (eight) and assists (nine).

After a late scratch in the game against Charlotte on Tuesday, the Wildcats received a week long break since their last matchup, both sides coming into the contest relatively fresh. The Wildcats opened their season with back-to-back contests against ACC sides #12 Maryland and Wake Forest in the #BeachBubble Showcase before falling to Florida Gulf Coast. However, Davidson enters their home contest on a two-game win streak, knocking off Charleston Southern in a 29-point win before beating ETSU rival Appalachian State by a 67-64 margin last Friday. The Wildcats look to extend it to three games in a row on just their second game inside their home arena.

Davidson returns all but one to their lineup of just a year ago, losing just their seventh-best scorer in Ally Welling. Three double-digit returners in Suzi-Rose Deegan (15.9ppg), Sarah Donovan (10.5ppg) and Katie Turner (10.4) give the Wildcats a potent attack returning, but it’s been Chloe Welch that has stolen the show so far. The junior guard has registered 22.2 points per contest early in the year, including a 32 point performance on 13-17 shooting against Appalachian State a week ago to earn A-10 Player of the Week.

Friday’s afternoon affair will be the 30th matchup between the sides in program history. The Wildcats hold a marginal advantage with a 16-13 record over the Bucs, but ETSU holds a 2-1 advantage since the two sides left the ASUN. Davidson, however, had the Bucs number in the 2019-20 campaign, coming into Brooks Gym and knocking off the Bucs by a 75-60 score.

Davidson entered the season placed fourth in the A-10 Preseason projections, while populating the Preseason All-Conference Teams. Deegan (First), Turner (Second) and Donovan (Third) all made preseason honors.

Friday’s 4 p.m. tip-off in Belk Arena will be streamed live online on ESPN+. Derek Smith will be the lone man on the call, with a link to the game here.

Tune in to 640 WXSM and join Mike Gallagher on the call for the Buccaneer Sports Network with the Atmos Energy Pregame Show starting at 3:30pm. Gallagher will give a review of the home opener against Presbyterian, preview the contest at hand and have a full breakdown of the contest with Coach Ezell. Click here to listen.