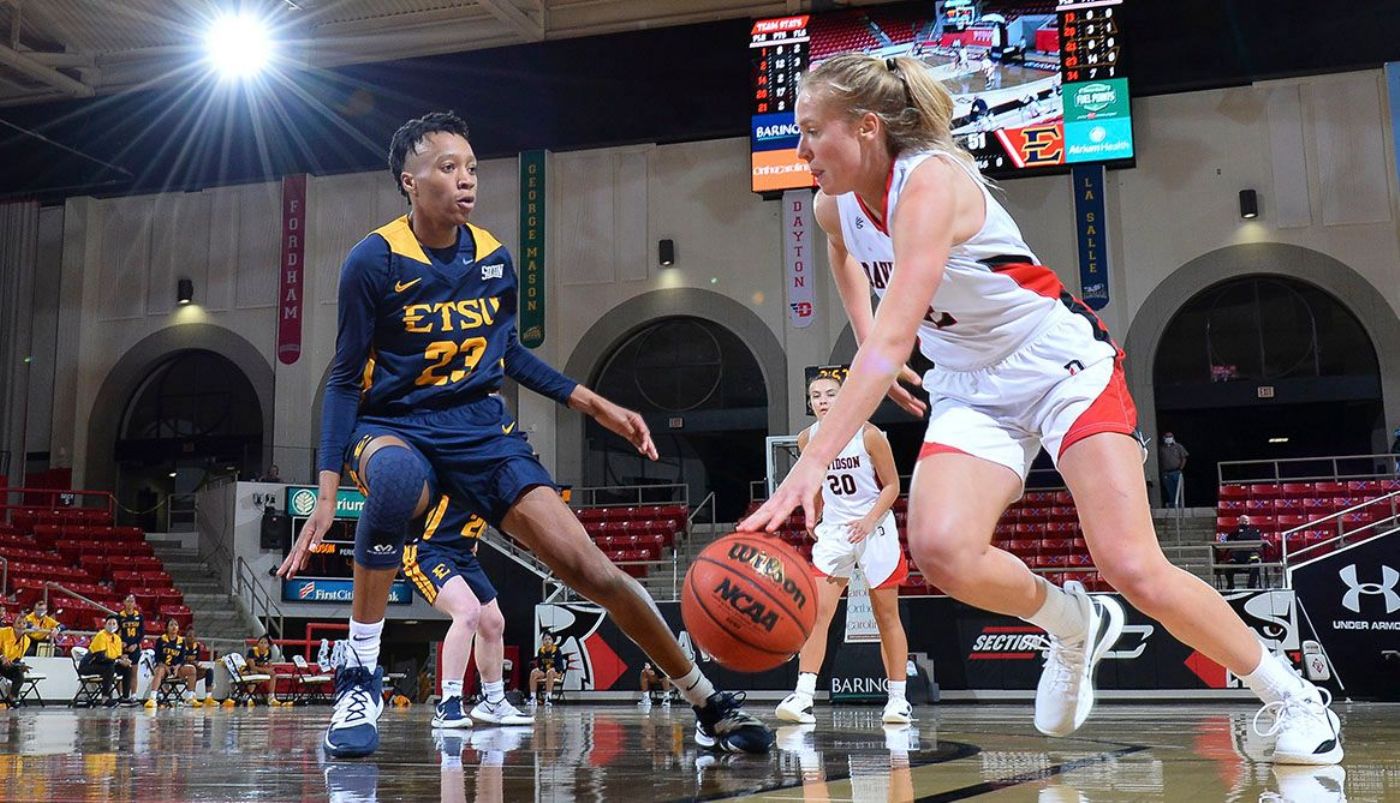 DAVIDSON, N.C. (Dec. 18, 2020) – It was a back-and-forth battle on Friday afternoon as the ETSU women’s basketball team suffered their fourth-consecutive defeat against Davidson, falling in a tough 70-64 loss to the Wildcats inside Belk Arena.

In a game right next to her hometown, Jasmine Sanders (Charlotte, N.C) did what she could to show out in her home state, scoring a season-best and game-high 18 points for the Bucs, while tying with a team-best seven rebounds. Freshman Jakhyia Davis (Knoxville, Tenn.) with another impressive game, quietly scoring 10 points and grabbing six boards. Mykia Dowdell (Oak Ridge, Tenn.) finished with a nine point, seven rebound performance while Amaya Adams (Kansas City, Mo.) notched eight points to lead the bench in scoring.

In last season’s contest, it was today’s host that entered the game on a 14-0 run to give the Bucs opening fits. A year later, however, it would be ETSU to open the scoring, knocking down the first eight points behind an and-one from Carly Hooks (Atlanta, Ga.) as well as back-to-back buckets from Sanders. The hosts would rally, scoring five points before the media timeout on their way to an eventual 14-2 run to take the lead 14-10. Each side traded one more basket to end the quarter in 16-12 fashion in favor of the Wildcats.

Down four to start the second, the Bucs made quick work behind a 7-0 run in the opening three minutes, including the first ETSU bucket from Kelly Post (Fayetteville, N.C.), coming from behind the arc. The run forced a timeout by Wildcat head coach Gayle Fulks to calm her team down. A Dowdell three on the other side of the break capped 10 straight points before the Wildcats responded.

Respond the hosts did, rattling off a run of their own as Davidson took a double-digit lead with just under three minutes to go in the half by scoring 16-straight points. With question marks about lack of effort shown in the previous game, the Bucs gave no doubt of their fight, once again going on the attack. Nine-straight points once again put ETSU within striking distance, where they would stay going into the break, trailing 34-33 to the hosts.

While the first half was a game of runs, both sides exchanged blows as the two sides battled back and forth in the third quarter. Both teams shooting well over 40% in the opening five minutes, the hosts were able to marginally extend their lead from their 3-4 shooting from behind the arc before the media timeout. Closing the gap to as much as two after the break behind Shynia Jackson’s (Warner Robins, Ga.) first basket of the day and an Adams free throw, the hosts pushed the lead to 51-47 as the closing seconds of the third quarter came to an end.

Both sides traded three-point bursts and offensive struggles in the opening five minutes of the final frame, the Bucs unable to get within one possession while the hosts found it difficult to pull away. The Bucs finally closed the gap after two free-throws on the other side of the fourth quarter media timeout found the Bucs trailing 57-55. It would be the closest the Blue and Gold were able to get the rest of the way, the hosts grabbing five-straight points and never allowing the margin get below five as time expired and the hosts walked out with a narrow 70-64 win.

After 32 points against Appalachian State her last time out, Davidson’s Chloe Welch followed her performance up with 14 points and 10 rebounds on 5-14 shooting. Cameron Tabor posted a team-high 17 points for the Wildcats, while Adelaide Fuller also posted double-figures with 13 points. The Wildcats shot 24-60 (40.0%) and 9-26 (34.6%) from the three, narrowly edging ETSU in turnovers with 18 compared to the Bucs 19.

ETSU is in action back at home Sunday afternoon in a contest with local rivals Appalachian State inside Brooks Gym. Tip is slated for 2 p.m.