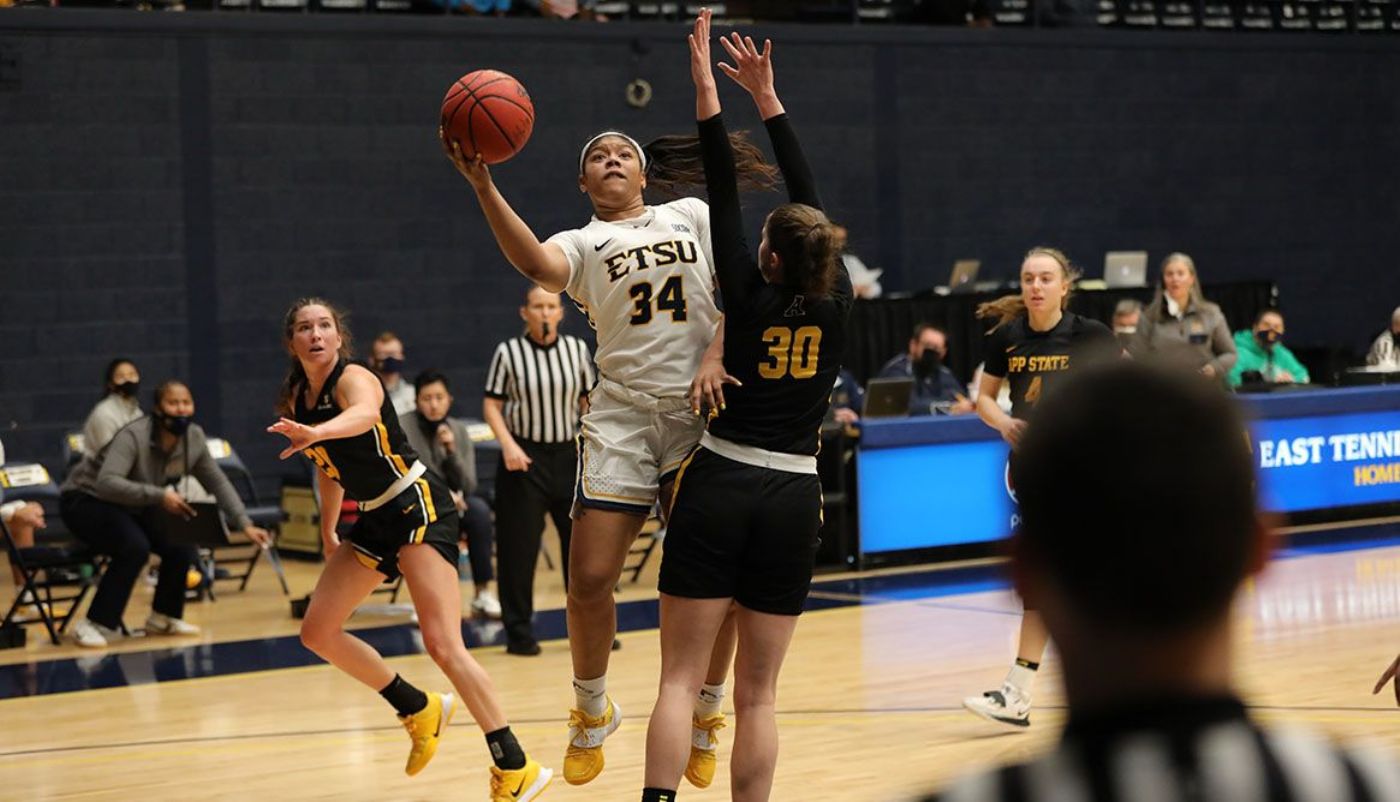 Buccaneer trio combine for 49 points in loss to Appalachian State

JOHNSON CITY, Tenn. (Dec. 20, 2020) – The ETSU women’s basketball team and Appalachian State took it to the wire on Sunday afternoon inside Brooks Gym. Despite a late Buccaneer rally in the final minutes, the Mountaineers knocked off the Bucs in a 69-66 thriller.

Trailing by seven with just two minutes to play, the Bucs forced three turnovers and gave themselves a chance for the win at the end. After tying the game at 66, ETSU had two opportunities to put themselves ahead, as Carly Hooks (Atlanta, Ga.) and Amaya Adams (Kansas City, Mo.) were unable to get their off-balanced shots to fall. The Mountaineers ended with the final three points­, fending off a last-second effort from Jasmine Sanders (Charlotte, N.C.) as the junior guard was unable to send it into extra time.

Jakhyia Davis (Knoxville, Tenn.) finished with a game-high 18 points for the Bucs on an efficient afternoon of 7-9 shooting, including knocking down both pairs of threes. Mykia Dowdell (Oak Ridge, Tenn.) once again finished with a strong performance, grabbing a team-high eight rebounds to go along with her 16 points. Sanders finished with 15 points for consecutive games in double-figures, while Hooks had one of her most productive outings in her early Buccaneer days, scoring nine points, grabbing six dimes and nabbing two blocks and steals to her name.

After ETSU’s strong production off the bench in the opening games, the Bucs were only able to grab eight points from beyond their starting five. The team however, put up their best offensive performance by shooting 26-60 (43.3%) from the field, 7-23 (30.4%) from deep while struggling from the line by making just 7-17 (41.2%) attempts. Once again the defense pestered the opposition, ending with 25 forced turnovers while assisting a team-high 13 times on the season.

After showing flashes in the last game against Davidson, ETSU proved how dangerous their offense could be when they are on early in the first qurter. ETSU used a 7-9 (77.8%) shooting clip in the opening five minutes to take a 17-11 lead into the media timeout. However, coming out of the break the Bucs seemed to rattle every part of the rim besides the netting while being hampered by turnovers as the home side clung to an 18-16 lead heading into the second frame. Sanders, Hooks and Davis contributed 17 of the 18 points in the opening quarter.

After Hooks opened the scoring in the second consecutive quarter, the Bucs finally grabbed their first basket from someone not Hooks, Davis or Sanders as Dowdell knocked down a jumper just inside of the arc. The Mountaineers rattled off five straight points soon after, but were countered by the offensive production of Davis. The freshman scored the next six points for the Bucs, putting her up to 14 on the afternoon, already surpassing her career-high. Appalachian State traded baskets with Dowdell to end the quarter as the Bucs entered the locker room with their first lead of the season after 20 minutes, 33-31.

After starting the game on fire, the Bucs came slightly back down to earth but still outshot their season average by almost 14% in the first half, knocking down 14-31 (45.2%) attempts. Despite outshooting the visitors and forcing 13 turnovers to their nine conceded, the Bucs strong first half performance only saw them lead by a basket. Davis led the squad with her 14 points, while Dowdell filled the stat sheet with a seven point, six rebound performance while swiping two takeaways.

The ETSU offense continued its strong start out of the break, extending their lead to as much as eight points in the early going of the third quarter. Leading 45-40 at the media timeout, however, the Bucs would be outscored by the Mountaineers 17-4 over the next five minutes as the Boone, N.C. side shifted the momentum heading into the fourth with a 57-49 lead.

Back on the attack, the Bucs opened the quarter with five straight points, including finding a fifth scorer in Amaya Adams with 6:25 remaining, who drove past her defender and avoided a Mountaineer defender already falling over to cut the lead to three. Trailing by seven with just over a minute remaining, the Bucs grabbed a pair of free throws through Sanders before forcing a turnover to get the ball back for a final surge. Hooks grabbed her first basket since the second quarter on the ensuing possession before making a steal and save, leading to a foul on Adams who converted one of two free throws to cut the lead to two.

Following an Appalachian State timeout, Mountaineer guard Pre Stanley traveled and gave the ball back to the hosts. Imani Williams (Kankakee, Ill.) made it count, tying the game up and giving the Bucs the chance for a go-ahead lead. With multiple chances, the Bucs saw their final two shots clank off the rim as the visitors would score the next three points on their way to taking a win from the Bucs inside Brooks Gym.

ETSU is back in Brooks Gym on New Year’s Eve, taking on Newberry in a 2 p.m. contest.