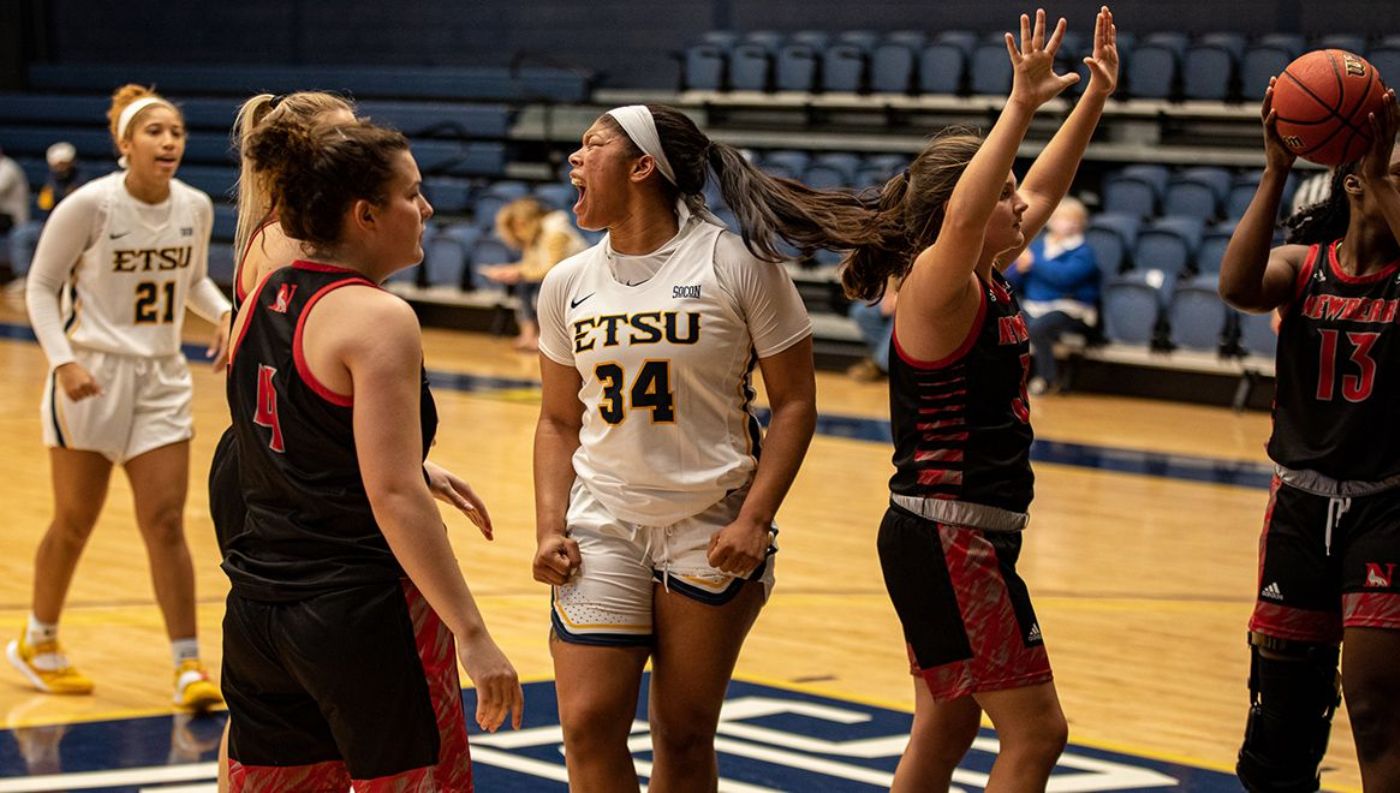 After scoring a then career-best 16 points against Appalachian State just 11 days ago, Dowdell once again toppled that feat while leading the Bucs in scoring against Newberry with 21 points on 8-15 shooting from the floor.

With the win, the Bucs move to 2-5 as they head into the conference portion of their schedule.

Along with her 21 points, Dowdell also lead the Blue and Gold with seven rebounds, while picking up a career-high in assists and matching her best in steals with three apiece. Not alone in breaking personal records, Carly Hooks (Atlanta, Ga.) joined in by collecting 12 points, the freshman averaging just over 10 points per game inside of Brooks Gym. Jasmine Sanders (Charlotte, N.C.) and E’Lease Stafford (Lawrence, Kan.) helped pace the Bucs with nine and eight points, respectively, while Kaia Upton (Nashville, Tenn.) led the team with four assists and steals, adding six points to her afternoon.

For back-to-back games, ETSU registered above 40% from the floor, knocking down 27-65 (41.5%) attempts from the field. The hosts have also showed a steady progression from deep, shooting 6-16 (37.5%) from beyond the arc. Coming into the game just outside the top 50 nationally in steals per game, the Bucs forced Newberry into 25 turnovers on 13 steals, grabbing a 23-5 margin in points off turnovers. The Blue and Gold also made their presence known inside the paint, scoring 32 of their 69 points from within while only allowing 14 from their opposition. ETSU also set season-bests with 14 assists and just 10 turnovers.

Despite ETSU playing their last game just 11 days ago compared to the 22 days Newberry has waited since their last contest, it would be the visitors that shook off the rust first as the Wolves took a 10-5 lead into the middle portion of the first quarter. The Bucs looked to find their energy levels again, using Stafford’s first basket in 11 quarters along with an Amaya Adams (Kansas City, Mo.) pickpocket and fastbreak layup to completely erase the deficit. Newberry’s Keli Romas responded with a three-pointer just seconds before the horn sounded that marked the end of the first frame.

Just a minute into the first quarter, the Bucs turned their three point deficit into an advantage, as Dowdell knocked down back-to-back deep jumpers to give the Bucs their first lead since leading 5-3 in the opening minutes of the contest. The three-point line and takeaways proved to be the Bucs’ best friend in the second, knocking down five of their eight made baskets from behind the arc while forcing the Wolves into 16 first half turnovers to give them as much as an eight point advantage. The visitors cut the score back down to two before a beautiful slip pass from Imani Williams (Kankakee, Ill.) found Ashawntae Brown (San Antonio, Texas) for an easy bucket with minimal time left to put the Buccaneers up 32-28 at the break.

Shooting just 34.3% (12-35) in the first half, the Bucs scorched the net from deep, knocking down 54.5% (6-11) of their long ball attempts. The Bucs also kept the rock safe the opening 20 minutes, forcing 16 takeaways compared to conceding just five, holding an advantage in points off turnovers by a 13-0 margin. Dowdell led the way in the opening half with a game-high 12 points.

Out of the gates in the second half, the Bucs wasted no time getting on the scoreboard with a nice feed down low to Dowdell. Back-to-back possessions of a pick and coast-to-coast basket by Hooks helped ETSU to a 10-1 burst to extend their lead to 42-29. Cutting the deficit under 10 only twice the rest of the quarter, the Wolves were undone from a strong shooting performance from the Bucs, who made 10-14 (71.4%) from the field, including 18 points in the paint in the third to give them a 54-40 lead heading into the final stanza.

After trading buckets early in the fourth, the Bucs stretched their lead to as high as 18 points with just over six minutes remaining, as Dowdell grabbed her own miss and finished through contact for her 20th point of the afternoon, the first time all season that ETSU recorded a 20 point scorer. Despite a late barrage of three point attempts from the visitors, the Bucs never allowed the lead to slip below 11 as they walked out of Brooks Gym with a comfortable 69-55 finish.

Kelsey Brett led the way for the visiting side with 14 points and five rebounds on the afternoon. Payton Cronen added an additional 12 points, five rebounds and five assists for the Wolves. After shooting over 45% in the first half, Newberry cooled to just 21-55 (38.2%) from the field. Newberry shot the deep ball at a high rate, knocking down threes at a 10-22 (45.5%) clip. The Wolves finished the game with a 41-35 advantage on the glass, hitting their average of +6 differential on the boards coming into the contest.

The Bucs have more than a week off in preparation of the start of the SoCon schedule, where they take on Chattanooga on the road in the opener on Saturday, Jan. 9 in a 2 p.m. tip.