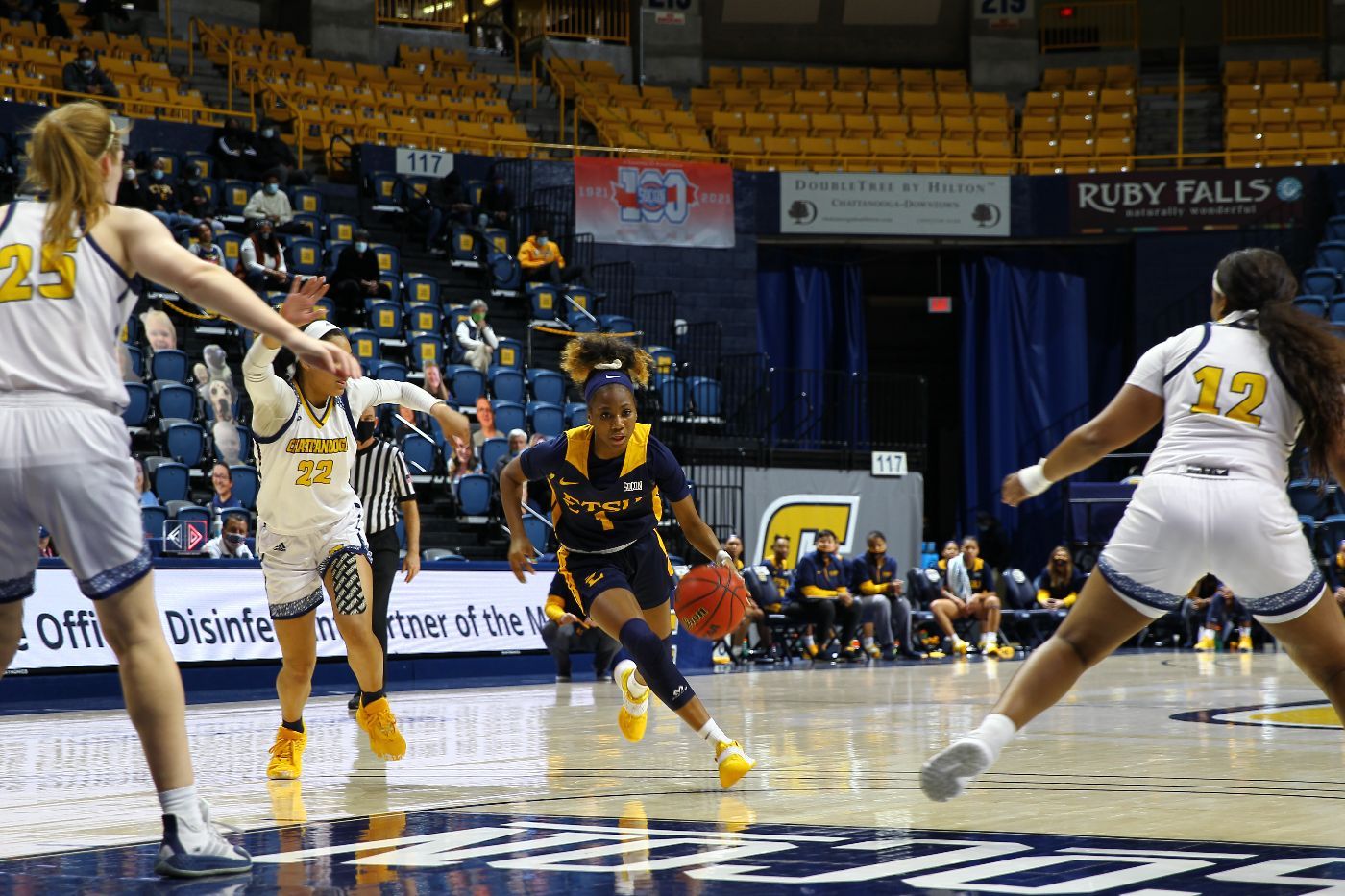 Another game, another career-best for Carly Hooks (Atlanta, Ga.) as the rookie led the team in scoring for the second time of the season. The guard scored 13 points and grabbed three steals, both bests in her freshman campaign. Shynia Jackson (Warner Robins, Ga.) finished with a season-high 12 points in the losing effort. Amaya Adams (Kansas City, Mo.) ended her afternoon with a stat line that credited her hustle, scoring six points while leading the Bucs in rebounding with eight boards, also grabbing two blocks and a steal.

As a team, the Blue and Gold struggled from the field, shooting just 20-65 (30.8%) from the field. The Bucs improved their average from deep, however, knocking down 5-15 (33.3%) attempts. ETSU outrebounded Chattanooga by a 41-32 margin, but fell behind on the free throw line with the hosts knocking down 14 points from the charity stripe compared to the Bucs’ six.

Another slow start hampered the Bucs, committing four turnovers and missing their first three shots in the opening five minutes, leading to a quick 7-0 deficit. Trailing 10-2 with just over two minutes remaining, Imani Williams (Kankakee, Ill.) made her mark just seconds off coming from the bench, fighting for three offensive rebounds on her way to a bucket to cut the deficit. With just over 30 seconds remaining, both Upton and Jackson used three-point plays as the Bucs forced their way back into the contest, ending the opening quarter down just 12-11.

Starting the second frame as they ended the first, E’Lease Stafford (Lawrence, Kan.) knocked down a triple on the opening Buc possession to give the Blue and Gold their first lead of the contest. Stafford, who lead the league in three point shooting last year, followed her basket by dishing to Jackson for an easy layup to extend the Buc lead to four. Seven straight Moc points reestablished the lead for the hosts before the two sides began trading baskets. Buccaneer foul trouble eventually sent the Mocs to the line on multiple consecutive possessions, extending their lead to six. Jackson’s 10th point of the contest with 32 seconds left ended the scoring in the half, the Bucs down just 33-29 heading into the break.

Shooting just 12-35 (34.3%) from the field in the first half, the Bucs countered their struggling offense by attacking the glass. The Blue and Gold outrebounded Chattanooga 24-13, including a dominant performance on the offensive glass, securing 11 boards while limiting the Mocs to just one. The Mocs, coming in with the most turnovers in the country, only succumbed to eight takeaways compared to ETSU’s 10.

As was the case in the first quarter, the early minutes of the third frame belonged to the home team. The Bucs, who have long fallen victim to a slow start to the opening quarter on either side of the half, were held scoreless for almost five minutes before Jasmine Sanders (Charlotte, N.C.) knocked down her first three points of the game, overriding another 7-0 Moc run to open the half. Chattanooga’s offense kept on the attack, using a 58.7% (7-12) clip from the field to extend their lead back to double-digits entering the final frame up 51-39.

The hosts quickly extended the lead to 15 in the fourth quarter, and seemingly answered every question the Buccaneers tried asking early on. Bria Dial and Dena Jarrells traded baskets between the pair, each time countering an attempted run from the visitors to try and get back in the game. A late effort from Hooks, grabbing three straight steals and scoring five points, cut the lead back to 10. The Bucs were unable to ride the momentum any further as ETSU would be sent home by the hosts with a loss to open conference play, 66-51.

Making their case for why they were Preseason All-SoCon Team selections, Eboni Williams (18 points, 15 rebounds) and Bria Dial (20 points, four rebounds) showed why they continue to cause havoc within the conference. Jarrells finished with an additional 12 points, all coming from outside the arc. The Mocs finished 23-47 (48.9%) from the field and 6-17 (35.3%) from deep.

ETSU heads back on the road next week, facing Wofford on Thursday and Saturday in Spartanburg, part of the new schedule format set for the 2020-21 conference season. Tips are set for 7 p.m. and 2 p.m.