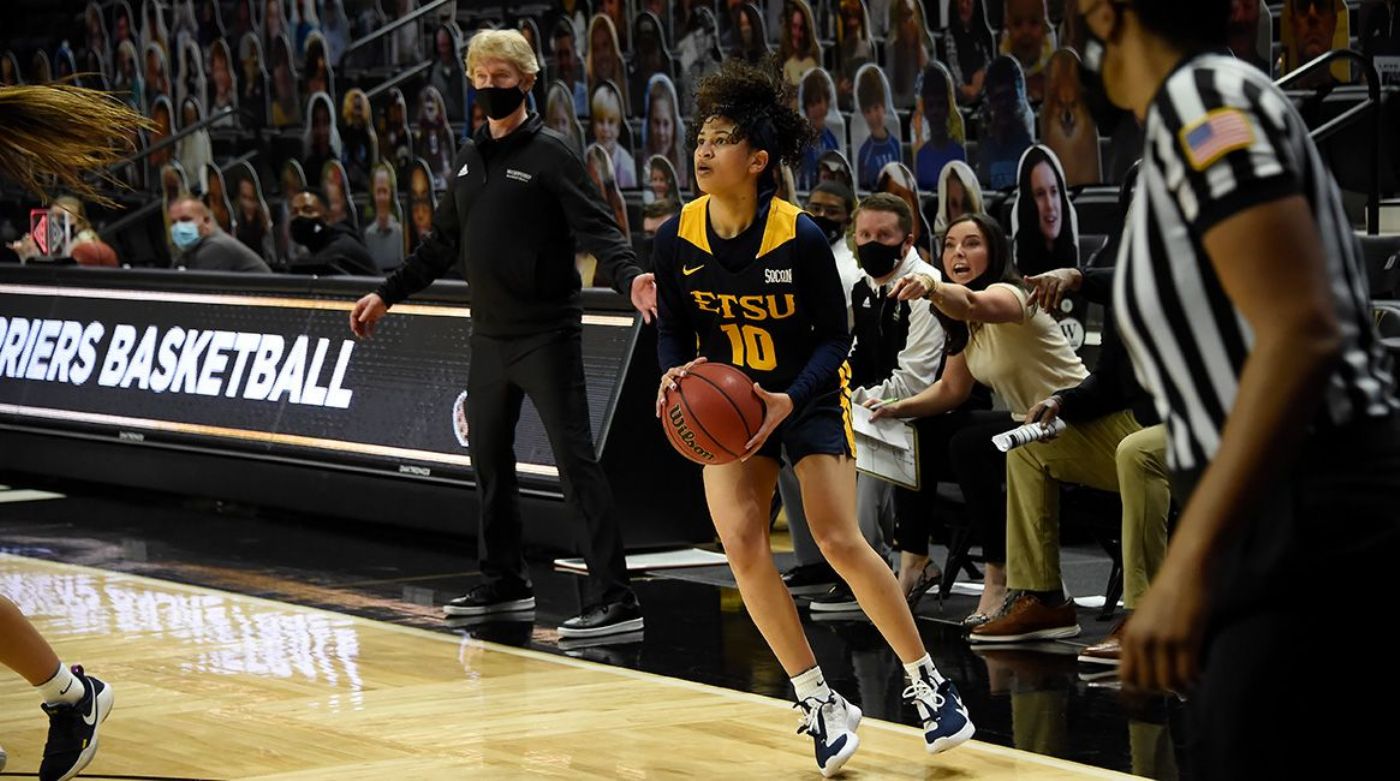 SPARTANBURG, S.C. (Jan. 14, 2021) – With an off night on the offensive side of the ball, the ETSU Women’s Basketball team ran into a hot shooting Wofford team from range, falling to the Terriers 75-49 inside of Jerry Richardson Indoor Stadium on Thursday evening.

For the eighth consecutive meeting between the two teams, the team that scored at least 75 points walked out of the contest with the win after a late Wofford layup put the hosts past that threshold.

Falling to 2-7 on the season and 0-2 in conference play, the Bucs found themselves on the wrong side of a 48-27 rebounding margin. The two sides entering the night as the two leading rebounders in the conference, ETSU’s -21 margin on the glass is the most conceded this season, while their 26-point loss is their second largest margin of defeat on the year.

Despite their struggles offensively, the Bucs recorded one of their most efficient nights in recent history on assist-field goal ratio. Recording assists on the first 11 of 13 baskets, ETSU finished with 12 assists on 17 field goals, a 70.6% clip.

E’Lease Stafford (Lawrence, Kan.) finished the evening with a team-high eight points, the first time the junior led the team in scoring all season after earning Preseason All-SoCon Team honors.

A trio of freshman all ended the night with seven points apiece, Carly Hooks (Atlanta, Ga.), Courtney Moore (Gainesville, Fla.) and Jakhyia Davis (Knoxville, Tenn.) combining for 7-20 from the field.

In her first start of the season, Imani Williams (Kankakee, Ill.) tied her season-high in points with five, using her first career three-point attempt and basket to get to that mark. The freshman also secured four rebounds against the Terriers.

The Terriers had four scorers in double digits, led by Niyah Lutz with 17 points. Jackie Carman finished with 14 points, while Lilly Hatton ended her night with 10 points and team-high eight rebounds.

The hosts jumped out to an early 15-4 lead, using an eight-point spurt to give themselves an 11-point advantage. Wofford used a 6-7 (85.7%) start from the field, including knocking down all three triples to start the competition to force ETSU in the first timeout of the game. Limiting the Terriers to just one of their next nine shots, the Buccaneer offense found it difficult to make up the difference, shooting just 3-14 (21.4%) from the field to fall behind 23-11 after the opening 10 minutes.

After conceding the first five points of the second, ETSU delivered a 7-0 run thanks to five straight points from Moore. After knocking down a pair of free throws, Moore became the beneficiary of a Sanders interception and assist, tickling the twine from the wing to cut the deficit. After a bucket from Davis, the home side once again went on a run, scoring the next seven points before a free throw by Kaia Upton (Nashville, Tenn.) and another triple by Hooks ended the bleeding. The Bucs headed into the locker room trailing 37-24.

After Mykia Dowdell (Oak Ridge, Tenn.) opened the second half with the first four points, the Buccaneers cut their lead to less than 10 for the first time since the 6:39 mark of the first quarter. However, that lead once again increased as the Terriers used an 11-3 run entering the media timeout to extend their lead to the largest of the game. After the second triple of the game for Stafford, Williams deflected the inbound pass and found Moore open just inside the arc to try and turn the momentum back into the favor of ETSU. The hosts quickly extinguished the opportunity, scoring the next 13 of 16 points to head into the final frame leading by 22.

Outscoring the Bucs 14-10 in the final quarter, the Terriers improved to 4-0 inside Jerry Richardson Indoor Stadium on the season, defeating ETSU in 75-49 fashion.

ETSU sticks around in Spartanburg, taking on the Terriers once again in the new conference format for the 2021 season on Saturday. The matchup is set for a 2 p.m. tip.