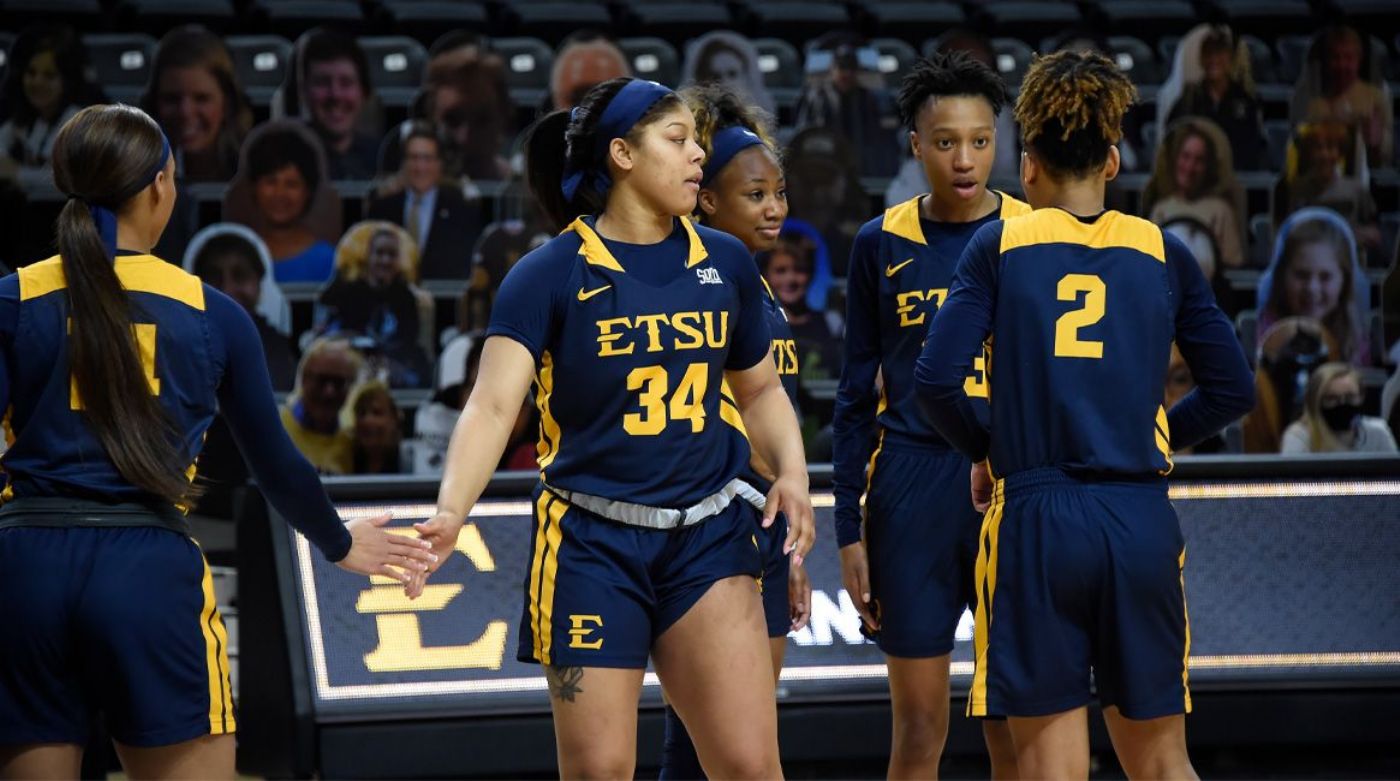 SPARTANBURG, S.C. (Jan. 16, 2021) – In a thrilling double-overtime matchup inside of the Jerry Richardson Indoor Stadium on Saturday afternoon, the ETSU Women’s Basketball team fell victim in a heartbreaking 79-78 loss to Wofford in the second matchup between the Terriers in the last three days.

The 40-point first half output proved the largest of the season for ETSU (2-8, 0-3 SoCon), their next best being the second half 39-point performance in the season-opener at Longwood. The two 20-point quarters in the first half marked only the 7th time in 40 quarters played this season that the Bucs posted a 20-point frame.

Wofford (7-3, 3-0 SoCon) finished the game with a shooting percentage of 41.5%, knocking down 27 of 65 attempts. The Terriers rippled the net on 8-26 (30.8%) efforts from range. The advantage came from the free-throw line, hitting 17-22 (77.3%) of their free shots, including 7-11 in the fourth quarter where they outscored the Bucs 14-7. Three Buccaneers combined for 14 fouls, where the Terriers were whistled for just 12 calls throughout the entirety of the game.

After losing the battle on the rebounds by their worst margin of the season on Thursday, the Bucs battled more competitively on the glass with just a slim 44-41 edge held by the home side.

ETSU dominated the turnover battle, committing 16 turnovers compared to their 22 takeaways. The Bucs created a 30-12 advantage in points off giveaways, while also securing an edge in second chance points at 16-11.

Mykia Dowdell (Oak Ridge, Tenn.) tied for a game-high 20 points on 8-14 shooting, one rebound shy of the first double-double of her career and of the season for ETSU. Her 20 points marks just the second time she’s reached that output. In her previous two SoCon appearances, the sophomore combined for just four points before breaking out of her recent form.

Jasmine Sanders (Charlotte, N.C.) provided sparks coming back into the starting lineup, finishing the night with 18 points, 15 of them coming after the first half. Sanders tied her career-high with four steals, while securing five rebounds before fouling out with over two minutes remaining in the first overtime.

Entering the season with a selection to the Preseason All-SoCon team, E’Lease Stafford (Lawrence, Kan.) gave validation to that nomination. The junior scored a season-high 17 points, including an 11-point 2nd quarter in her best performance of the campaign for the Blue and Gold. For the first time on the year, Stafford finished in double-digits in scoring, knocking down five of her 10 attempts from three.

With another steady performance in her first season, Carly Hooks (Atlanta, Ga.) finished her afternoon with 10 points, five coming in the second overtime to keep the Bucs within striking distance. This marks the first time this year the Bucs have registered at least three double-digit scorers, and the first time since the triple-overtime game last season against Chattanooga that four Bucs registered 10+ points.

Imani William’s (Kankakee, Ill.) second start of the season finished with a career-high six rebounds. The freshman also recorded two assists, one steal and a block.

Niyah Lutz tied Dowdell with a game-high 20 points, leading the way for the Terriers. Jackie Carman (17) and Jamari McDavid (16) each contributed double-digit figures in scoring, the latter securing a double-double with 11 rebounds.

Despite conceding the first five points in the contest, the Bucs refused to get out to the same start that haunted them on Thursday. In back-to-back possessions, the Bucs had the score tied back up on their way to scoring 12 of the next 14 points. Holding a 12-7 lead after forcing the Terriers into four turnovers in the opening four minutes, the Bucs forced Wofford Head Coach Jimmy Garrity into an early timeout. The hosts climbed back to within one, but ETSU held their marginal lead into the second frame. The Bucs led 20-19 after the first quarter, much improved on their 12-point deficit after 10 minutes just two days prior.

The Bucs extended their lead early in the second, scoring 10 straight points after an opening Wofford basket. Stafford seemingly broke out of her early season slump by knocking down a pair of triples in the run, extending the lead to 30-22 for the Blue and Gold. Moments later, the junior from Kansas again tickled the twine, knocking down her third triple of the quarter, this one five feet behind the line to put the visitors up 38-27. Stafford’s smooth post move again put the Bucs up by 11 in the final minute, but Jackie Carman found the bottom of the net from range with just seconds remaining in the quarter to cut the Terrier deficit to 40-32 heading into the locker rooms.

Cooling down slightly in the start of the third, the Bucs still managed to control the Wofford offense in large part to forcing them into pressure and turnovers, the two sides trading points to the opening media timeout. With only one basket on the other side of the timeout from each team, the Bucs found a 50-43 lead heading into the final 10 minutes.

Opening the quarter with back-to-back possessions sent to the free-throw line, Carman quickly cut the ETSU lead to four points. Lutz followed with three points of her own, and the visitors found themselves holding on to just a one-point lead just over two minutes removed from the start of the quarter. Carman again found herself at the free-throw line, sinking both to give the hosts their first lead since the opening basket of the second quarter. The Bucs took another lead at 55-53 with 4:39 remaining from a floater by Amaya Adams (Kansas City, Mo.). The Blue and Gold were held scoreless the next three minutes until Dowdell cut the now Buccaneer deficit to two points after an offensive rebound and put back. After forcing a turnover, Dowdell again was beneficiary of a beautiful drive and dish from Kaia Upton (Nashville, Tenn.) to tie the game at 57 with 26 seconds remaining. With the final possession, the Terrier offense found little opportunity due to the pressure of the Buc defense, unable to come away with a clean opportunity as the two teams headed into the first extra basketball game of the Blue and Gold’s season.

Scoring just seven points in the fourth and 10 points in the third, the Bucs wasted no time to pass that mark. Sanders, Stafford and Dowdell knocked down threes on consecutive possessions to put the visitors up five before the hosts answered with five straight points of their own. In the final possession, the Wofford defense deflected a last second Hooks effort on the way to the second overtime of the game.

Dowdell opened the second overtime with a second effort put back off a Buccaneer miss, getting fouled in the process on her way to an old-fashioned three-point play. Despite the wave of momentum, the Terriers found the next seven points before another three-point play, this time from Hooks, cut the Wofford lead to one. Adams once again would give the Bucs the lead with 37 seconds remaining, before Lilly Hatton knocked down a jumper on the other end. With five seconds remaining, ETSU found Stafford in the corner, her trifecta falling just short and the hurried offensive rebound and put back from Adams didn’t find the netting as the buzzer sounded. The hosts escaped with a narrow 79-78 win in double overtime inside Jerry Richardson Stadium.

ETSU comes back home for the next conference series, hosting the Spartans of UNCG inside Brooks Gym on Friday and Sunday. The matchups are set for 7 p.m. and 2 p.m. tips.