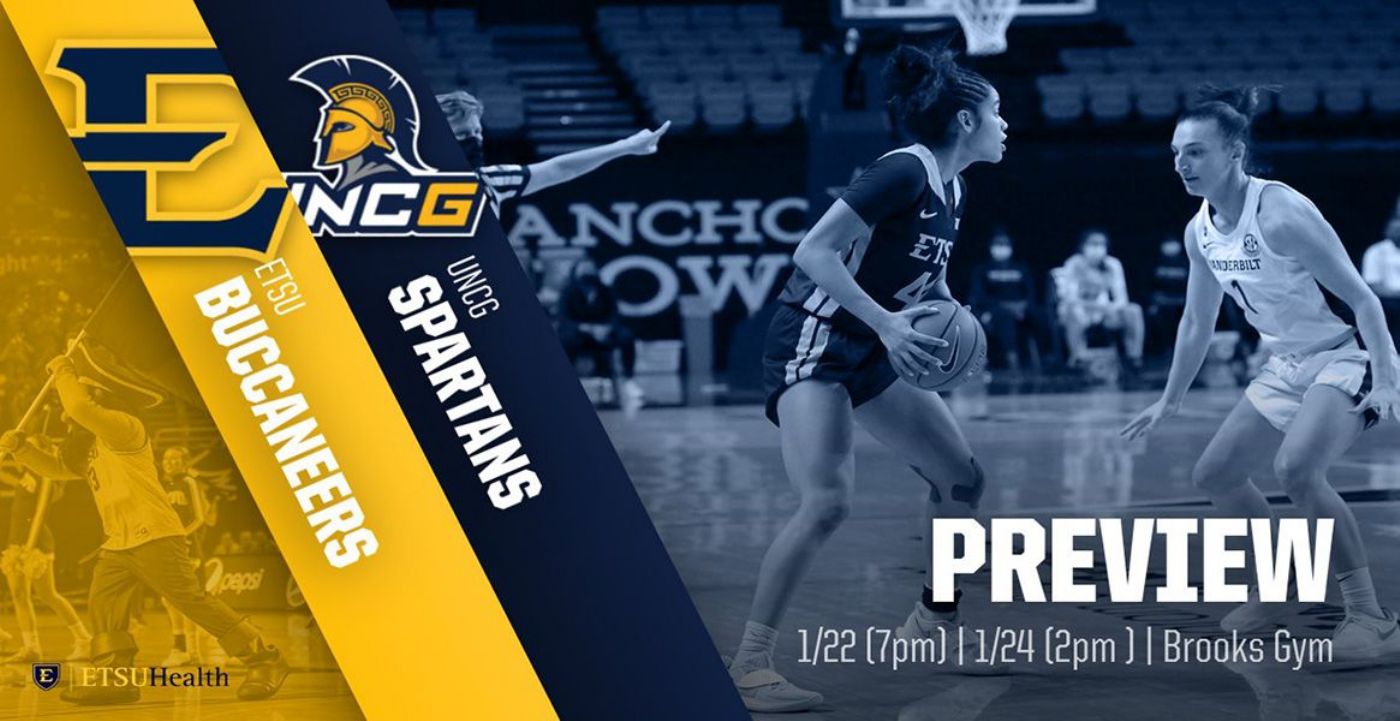 JOHNSON CITY, Tenn. (Jan. 21, 2021) – Suffering a heartbreaking double-overtime loss to Wofford their last time out, the ETSU Women’s Basketball team looks to bounce back this weekend. Hosting the UNCG Spartans on both Friday (7pm) and Sunday (2pm), the Bucs look for their opening wins in SoCon play inside Brooks Gym.

After traveling to Spartanburg last week for two games against Wofford, the Bucs (2-8, 0-3 SoCon) enter on the other side of a weekend sweep at the hands of the Terriers. After a 26-point defeat on Thursday, the Blue and Gold responded positively by taking an eight-point lead over the hosts heading into the break on Saturday. A cold shooting effort in the second half allowed the Terriers to claw back in, able to force the game into overtime. The Bucs grabbed a five-point lead late in the first overtime period, but Wofford used late heroics to again force an extra five minutes, where the hosts clung to a one-point lead and escaped Jerry Richardson Indoor Stadium with a 79-78 win.

After a 20-point performance last Saturday, Mykia Dowdell (Oak Ridge, Tenn.) remains the Bucs’ leading scorer, averaging 10.4 points per contest. Jasmine Sanders (Charlotte, N.C.), continues to come on offensively, using an 18-point effort last Saturday to increase her average to 9.1 points per game. Jakhyia Davis (Knoxville, Tenn.) and Carly Hooks (Atlanta, Ga.) combine for 15.2 points, the second most between a freshman tandem in the conference (Furman’s Sydney James and Tate Walters). As a team, the Bucs rank 14th in the country in turnovers forced per game.

The Spartans have been without key player Aja Boyd for all of their season thus far, the senior forward the only returning Spartan in double-figures from last year’s squad. Stepping up for the Greensboro side have been CeCe Crudup and Tori Powell, the two combining for 17.6 points per game while leading the team with 25 assists each. Khalis Cain enters the weekend averaging a team-high 6.8 rebounds per game.

After narrowly losing in the SoCon Tournament Championship game a year ago, the Spartans have gotten off to a slow start in the 2020-21 campaign, entering the weekend series at just 2-10. After suffering a home sweep to Mercer last week, the Spartans sit 0-3 in conference play and eighth in the standings. The offense has yet to reach the heights of last season, scoring just 47.2 points per game, ranking last in the SoCon. UNCG ranks last in both field goal percentage and rebounding, but the Spartans saving grace is that they are amongst the top in the conference in scoring defense, allowing under 60 points per game.

The Bucs hold a 20-17 advantage over the Spartans in their series history, the recent battles between the two reflecting the small margin the Bucs retain. After sweeping the Spartans in the 2018-19 season, ETSU fell to UNCG all three times they met last season, including a 57-47 exit in the first round of the Southern Conference Tournament. Brittney Ezell holds a 9-5 mark against Trina Patterson’s side in her tenure as Buccaneer head coach.

Both Friday’s and Sunday’s 7 p.m. and 2 p.m. tip-off inside Brooks Gym will be streamed live online on ESPN+. Mike Gallagher and Bruce Tranbarger will be on call in Friday’s matchup on ESPN+, with a link to the games below. Jay Sandos takes over play-by-play duties for Gallagher in Sunday’s contest, also to be shown on ESPN+.

Tune in to 640 WXSM and join Mike Gallagher on the call for the Buccaneer Sports Network with the Atmos Energy Pregame Show starting at 1:30pm on Sunday. Gallagher will give a review of the season thus far, preview the contest at hand and have a full breakdown of the contest with Coach Ezell.