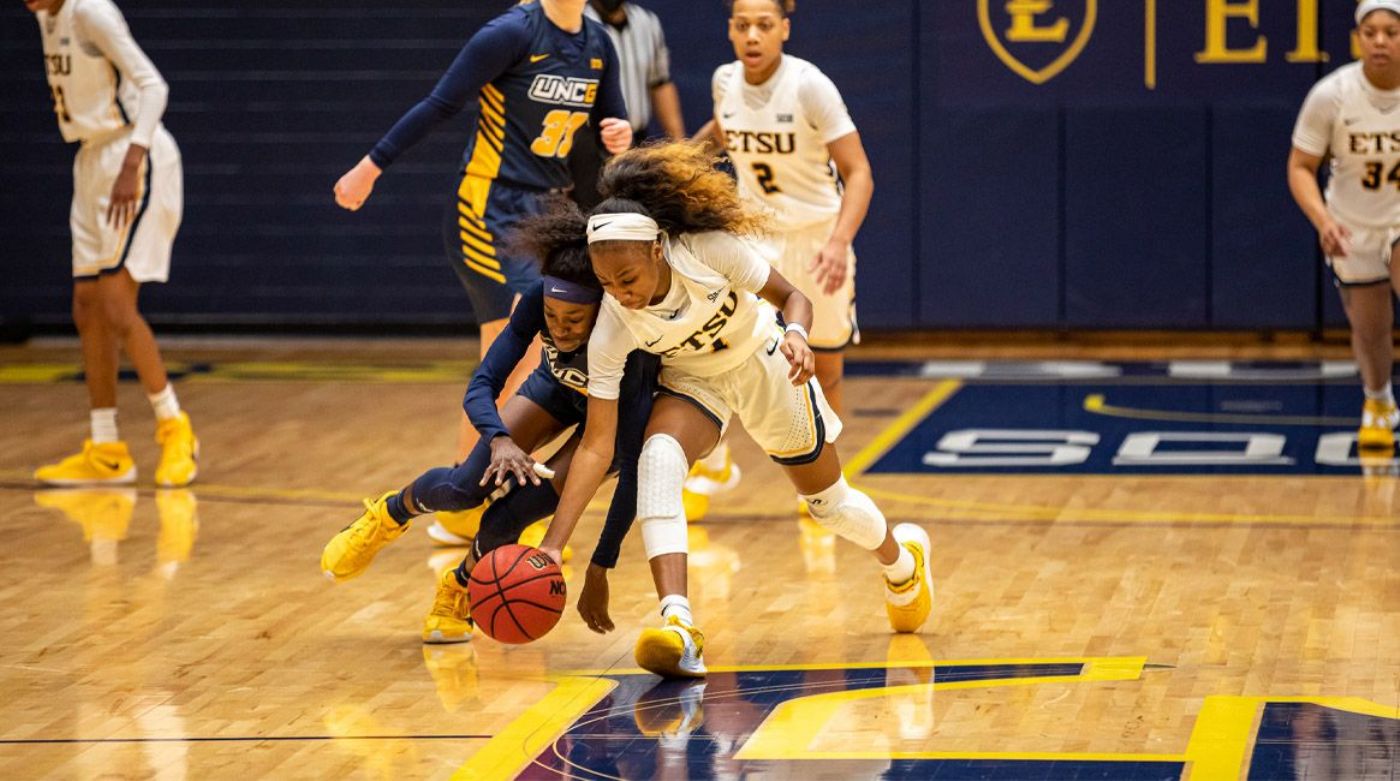 Despite 23-14 advantage in the fourth, Bucs fall to Spartans 56-53 in league play

JOHNSON CITY, Tenn. (Jan. 22, 2021) – Despite an inspired performance in the fourth quarter, the ETSU women’s basketball team left themselves with too much work to overcome as the UNCG Spartans escaped Brooks Gym with a 56-53 win over the Bucs on Friday evening.

With the loss, the Bucs fall to 2-9, now 0-4 in conference play. The Spartans improve to 3-10, gaining their first win in the conference to move to 1-3 in the SoCon.

After falling behind 23-17 on the rebounds, the Bucs dominated the glass in the second on the way to a 35-33 advantage. ETSU converted 17 offensive rebounds into a 12-2 advantage in second chance points.

The Bucs forced 18 takeaways from the Spartans, conceding just 11, a season low. ETSU outscored UNCG 22-11 in points off turnovers.

The Blue and Gold were in a sharing mood, grabbing 11 helpers on 15 made baskets, good for a 73.3% clip in assists to field goals

Leading the way for the Bucs was Carly Hooks (Atlanta, Ga.). The freshman finished with a game-high 12 points, nine coming in the second half on 3-4 shooting with three steals to help charge the comeback.

Tori Powell and Pernilla Sorensen both finished with 12 points for the Spartans, the Swede attempting all eight of her efforts from deep, sinking four. Cece Crudup finished with 10 points, while Khalis Cain gave the Spartans an eight-point, 12 rebound spark.

Both sides found the opposition’s defense a hassle to deal with, the two teams combining for just 7-27 shooting from the field in the opening frame. The visitors’ 14-8 advantage on the glass in the opening quarter as well as five points from the charity stripe compared to the Bucs’ one gave the Spartans a 15-8 advantage heading into the second stanza.

More of the same from the opening 10 minutes, both offenses continued to struggle to find a rhythm. Despite ETSU’s four offensive rebounds, the Bucs were only able to capitalize with two second chance points. Stafford’s second three of the game cut the Buccaneer deficit to five with just over a minute to play before UNCG responded, holding their seven-point advantage into the break leading 27-20.

After allowing a Tori Powell trifecta to open the third quarter scoring for UNCG, the Bucs held the Spartans to nearly five minutes of scoreless basketball due in large part to four forced turnovers. In that time, the Bucs only grabbed four points, their first basket of the half coming from a three by Davis with 4:54 remaining in the quarter. UNCG snapped out of their scoreless streak, finishing 5-9 from the field in the quarter on their way to a 12-point, 42-30 lead heading into the final 10 minutes.

Holding their lead for the opening three minutes of the fourth, the Bucs finally made their move. Hooks and Upton made back-to-back baskets, before a pair of Sanders free throws and a corner three from Hooks forced the Spartans into a timeout leading only by three. ETSU finished their 13-1 run on the other side of the timeout, tying the game with just over three minutes left to play. With just over a minute remaining, Hooks forced UNCG into another forced error and scooped up the takeaway, leading the charge to give the Bucs a 51-50 advantage, their first lead since it was 5-2. Back-to-back fouls on the freshman put Crudup at the line on the ensuing possession, the Spartan knocking both of them down for the final lead change of the evening for either side. A pair of Stafford free throws late forced the game back to one point with six seconds left, but the Spartans knocked down their two attempts at the charity line. Given one last look to tie, a contested three from Mykia Dowdell (Oak Ridge, Tenn.) clanked the rim as time expired, leaving ETSU still searching for their first conference win of the season, falling in home territory 56-53.

ETSU finishes their season series with the Spartans back inside Brooks Gym on Sunday afternoon, facing UNCG in a 2 p.m. tip.