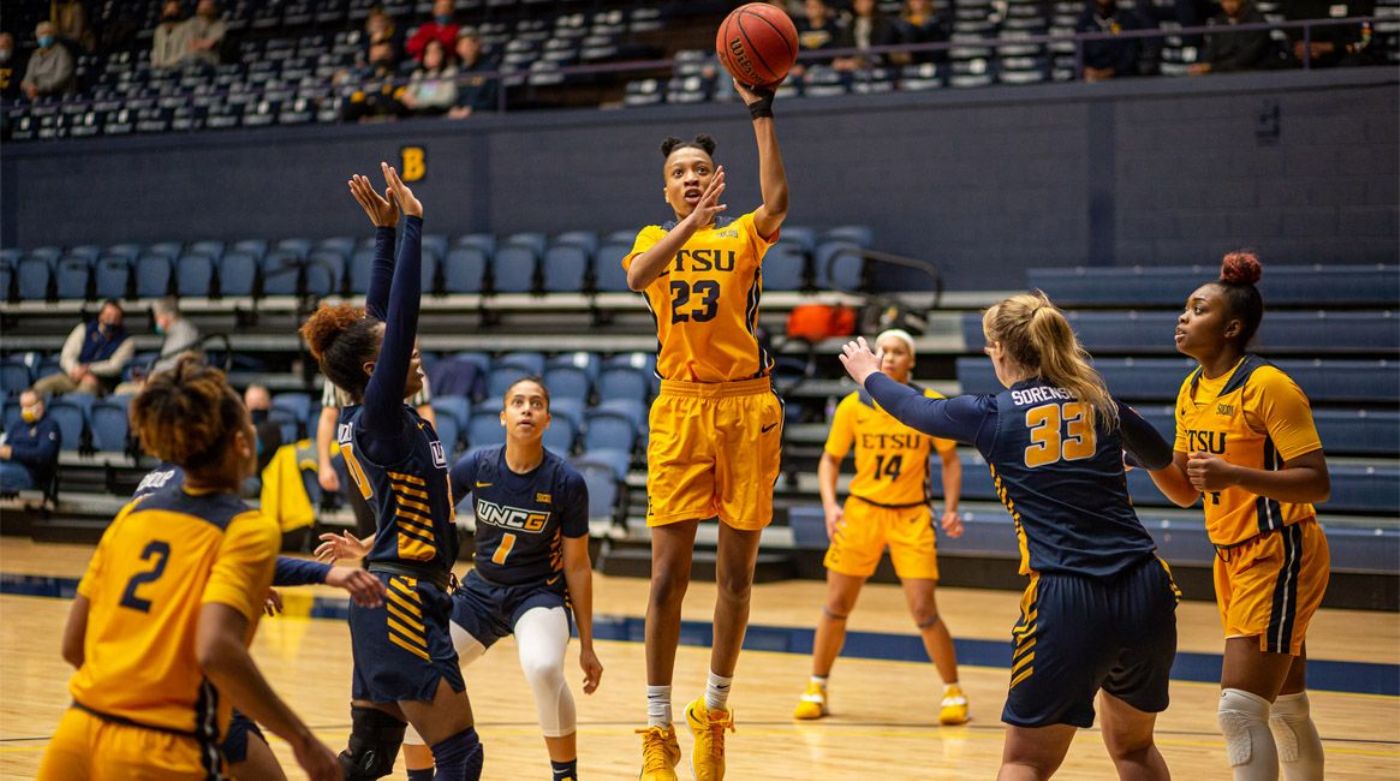 JOHNSON CITY, Tenn. (Jan. 24, 2021) – True to fashion, the Bucs gave a gritty, high-energy team performance on the defensive side of the ball. But on the other end, Jasmine Sanders (Charlotte, N.C.) took over with a 28-point performance to give the ETSU Women’s Basketball team their first win of the SoCon campaign, defeating UNCG 58-48 Sunday afternoon inside Brooks Gym.

ETSU never trailed in the contest, holding the lead for 39:42 minutes. The Bucs also took just their fourth lead into halftime, 2-2 in contests they enter the break ahead. The 58 points scored are a season-low in a Buccaneer win, having been 0-5 when the offense failed to score 60 points prior to this afternoon.

Shooting it just slightly over their 34.3% season average (17-49 for 34.7%), ETSU did their damage on the defensive side of the ball. For the first time this season, the Bucs held their opponent under 30% from the field, holding the Spartans to just 26.9% (14-52) shooting. The 48 points ETSU held UNCG also marked a season-best for the Buccaneer defense, helping pace the Bucs for their first win in the conference.

Despite a 38-32 (15-9 offensive) advantage in rebounding in favor of the visitors, ETSU limited UNCG to just 10 second chance points, not allowing the Spartans to capitalize on extra possessions.

ETSU had their best performance from the free throw line of the season, knocking down 20-24 attempts from the line. The 83.3% clip is nearly 7% better than their previous best, a 10-13 (76.9%) effort against Tennessee.

Finding a home at the charity stripe, Sanders coupled her 10-12 performance from the line with an 8-13 (61.5%) effort from the field. The junior scored a game-high and tied her career-best with 28 points, adding seven rebounds to her afternoon tally.

Khalis Cain led the Spartans in scoring and rebounding, finishing with a 13 point, 10 rebound double-double. Cece Crudup finished with 12 points for UNCG, but did so on 19 shots, going 4-19 from the field.

After the two sides struggled the opening three quarters offensively last time out, both traded baskets in the opening 10 minutes. While the Spartans edged the Bucs in shooting percentage, ETSU grabbed an extra offensive board and took advantage of its freebies as Sanders knocked down her pair of attempts from the line. Using the glass and free throws, ETSU found itself a three-point lead after 10 minutes

UNCG opened the second frame with a pair of free throws to cut the game to one. After an answer from Shynia Jackson (Warner Robins, Ga.) the Buccaneer defense followed suit. UNCG fell into an 8:10 minute scoring drought, the visitors missing their first 10 field goals and succumbing to four turnovers in that span. ETSU extended their three-point lead to start the quarter to as much as 11 in that spurt before a pair of Spartan free throws late cut the Buccaneer lead 27-18 heading into the break.

The Blue and Gold came out the gates in the third quarter with the first five points, increasing their advantage to 14, the highest lead of the night. UNCG found their groove, responding with a 12-2 run to cut the lead to as little as four for the Bucs. But unable to last, the Spartan offense finished the quarter making just one of their final eight attempts, Sanders scoring seven of the 11 third quarter points for ETSU to give the Bucs a six-point lead into the final frame.

Davis opened the scoring in the fourth with a pair of free throws for ETSU before momentum once and for all shifted to the home side. With just over eight minutes left, Sanders drained a three from an Upton dish, putting the junior guard into 20+ territory for the first time as a Buc with her 22nd point. The next trip down, Upton again played provider, finding freshman Carly Hooks (Atlanta, Ga.) wide open, knocking down the second straight trey in as many possessions, forcing a UNCG timeout with the visitors trailing by 14 with just 7:32 to play. The Spartans finally scored their first point of the fourth with nearly six minutes on the clock, rattling the next five points to cut the Buccaneer lead again to single-digits. Despite any attempts at a late comeback, the ETSU squad grabbed its best performance of the season from the line, knocking down free throws late to thwart any chance of the visitors trying to grab a weekend sweep inside Brooks Gym. UNCG managed to get the lead to as little as seven, but the Bucs finished with three late free throws to take a double-digit, 58-48 victory over the Spartans for their first win in conference play of the year.

ETSU stays home for two-straight games against the Catamounts of Western Carolina, battling in Friday-Sunday action inside Brooks Gym. Game times are scheduled for 7 p.m. and 2 p.m.