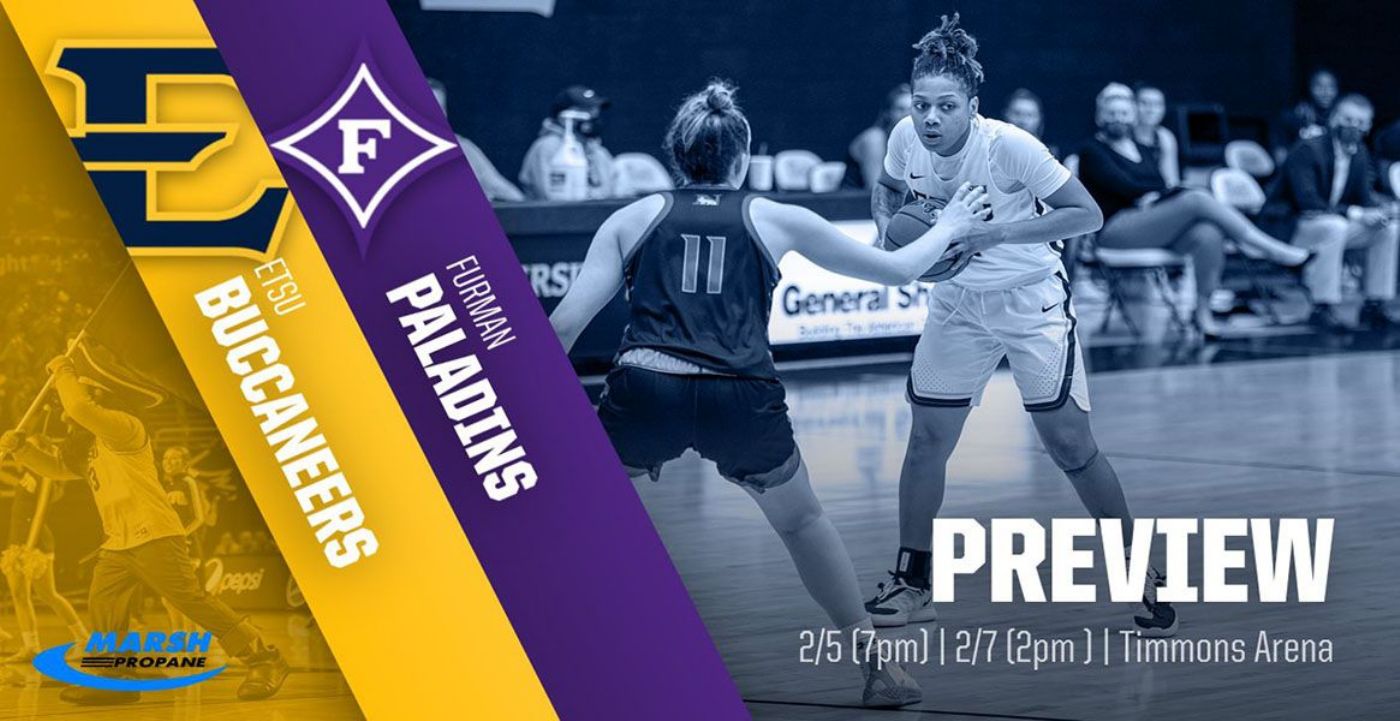 JOHNSON CITY, Tenn. (Feb. 4, 2021) – After a near two-week pause in action due to COVID-19, the ETSU women’s basketball team is back in action, traveling to Greenville, S.C. to take on the Furman Paladins this weekend.

The two sides meet in a Friday-Sunday doubleheader as part of the updated women’s basketball schedule for this season, with tip-offs scheduled for 7 p.m. (Feb. 5) and 2 p.m. (Feb. 7).

The Blue and Gold haven’t competed since January 23, where they grabbed their first SoCon win of the season in a series split against UNCG inside Brooks Gym. Jasmine Sanders (Charlotte, N.C.) had a career-night, tying her high in scoring with 28 of the Buccaneer’s 58 points in the 10-point victory on Sunday afternoon. With the home series against Western Carolina yet to be rescheduled, the Bucs look to now hold on to carry their momentum on the road against the Paladins.

Averaging 13.6 points in SoCon play, Sanders leads the team in scoring for the Bucs after a career-mark of 28 points against the Spartans. Since the start of conference action, freshman Carly Hooks (Atlanta, Ga.) has increased her role on both sides of the ball. Scoring nearly 10 points per game in the SoCon, Hooks has been the team leader in steals with 11 on a squad that ranks 14th in the country in turnovers forced per game entering the week. Kaia Upton (Nashville, Tenn.) continues her role as floor general, registering 30 minutes a game while averaging nearly four rebounds and assists per game, along with her nearly six points and two steals per contest.

After falling to Samford in both games on the road just a week ago, Furman enters the weekend series at the bottom of the SoCon, holding just a 1-6 record in conference, 5-11 overall. Conversely, the Paladins are coming off a season in which they held a 19-12 record with an 8-6 mark in conference play.

The Paladins have a walking double-double in the form of Tierra Hodges. The redshirt senior averages 17.3 points (second in SoCon) per contest along with 10 rebounds per game, netting seven games in double figures in both points and rebounds. Furman sit in the middle of the conference in points scored, field goal percentage and three-point percentage while being one of just four schools with a positive rebounding margin. Both Tate Walters and Paraskevi Koilia prove to be the playmakers in the offense, each recording 3.8 assists per game.

The Greenville side has held the advantage in the series history, owning a 42-23 record against ETSU since the two programs first collided. However, in the return of the Bucs to the SoCon, ETSU has done their part in turning the record around, currently 8-5 against Furman despite being on the losing side of the last three games.

Both Friday’s and Sunday’s 7 p.m. and 2 p.m. tip-off inside Timmons Arena will be streamed live online on ESPN+. Bryant Lambert and Terrance Oglesby will be on call in both matchups on ESPN+, with a link to the games below.

For Sunday’s game, tune in to 640 WXSM and join Mike Gallagher on the call for the Buccaneer Sports Network with the Atmos Energy Pregame Show starting at 1:30pm. Gallagher will give a review of the season thus far, preview the contest at hand and have a full breakdown of the contest with Coach Ezell.