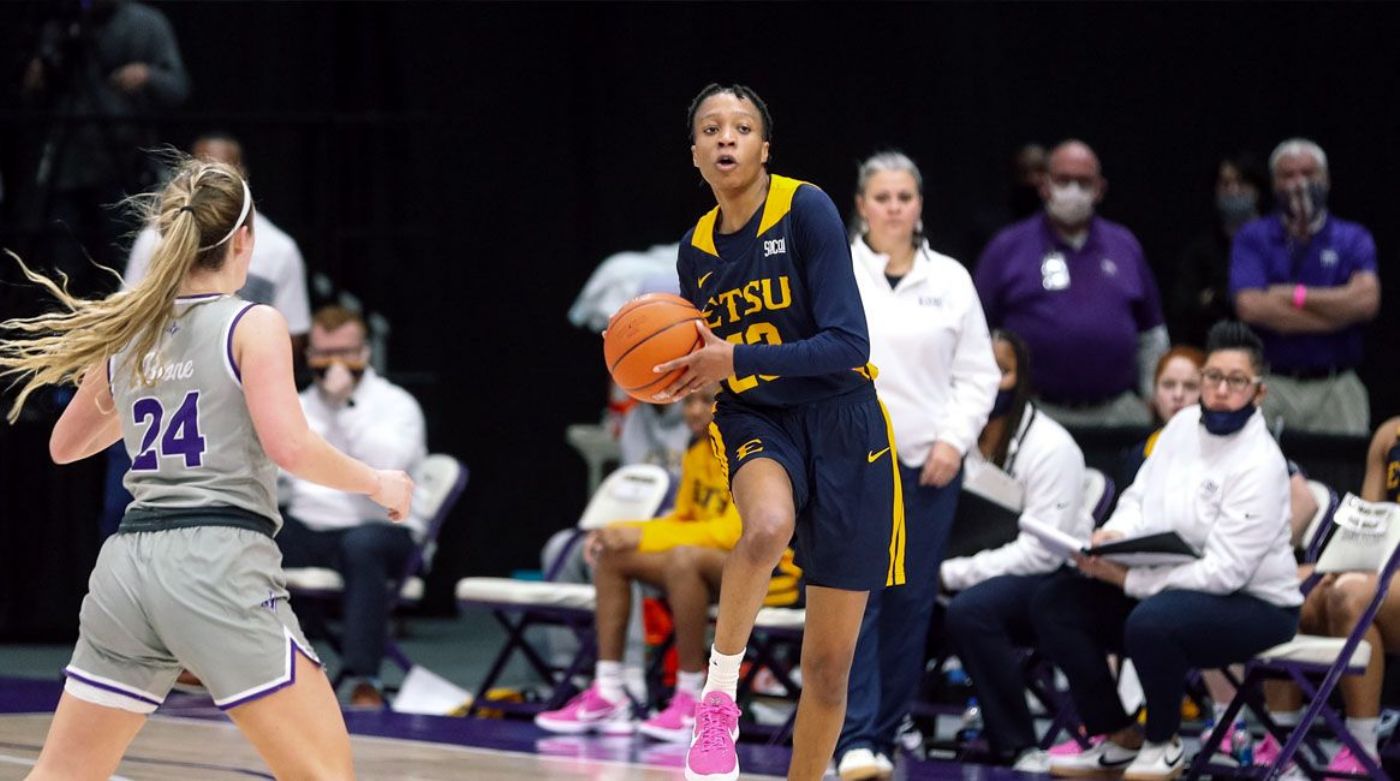 Greenville, S.C. (Feb. 5, 2021) – As time wound down in the first half, Jasmine Sanders (Charlotte, N.C.) hurled a 70-footer to beat the buzzer in Timmons Arena and buried the miraculous attempt, a moment worthy of an appearance on ESPN’s SportsCenter.

Unfortunately for the Bucs, who were coming off of a COVID-19 shutdown and carrying only eight healthy bodies into their series-opener versus Furman, the spectacular from Sanders and a career-high in points and rebounds from freshman Jakhyia Davis (Knoxville, Tenn.) couldn’t overcome a strong performance from the Paladins, who claimed their second Southern Conference victory in a 68-56 result.

Beginning to build a big night, Davis scored the first five for the Buccaneers in the second quarter as they trailed by just five with 15 minutes gone by into the contest. But Davis wasn’t receiving enough help, and she found the Bucs on the wrong end of a 10-2 run that drained all but one second of the first half clock away.

That lone second would provide a boost for Davis and her team, and give Buc fans a moment to remember. As Furman’s Maddie Griffon missed a layup with four seconds left, Imani Williams (Kankakee, Ill.) would take the rebound with the clock running, find Sanders with only enough time left to gather and fire from three-quarters-court.

It went in as the halftime horn sounded.

It appeared the longest shot in recent history for ETSU Women’s Basketball would be a momentum-shifter, as Davis hit a triple on the first possession after leaving the locker room, but following a stop by Brittney Ezell’s squad, a turnover that led to a second-chance basket for the Paladins the very next possession quelled the Bucs would-be run.

Scoring just five points over the next six minutes, Ezell & Co. watched as Furman reeled off 15 of the next 20 and eventually built a commanding 21-point lead before the third quarter came to an end.

While ETSU would use the end of the third quarter and early fourth quarter to rattle off eight straight points, the Paladins stabilized, never seeing the lead sink below double-digits the remainder of the evening.

Davis would amass a monster night, putting up a career-high 25 points by making 10 of her 15 attempts from the floor, while also grabbing a career-best 14 rebounds, the freshman’s first career double-double. Mykia Dowdell (Oak Ridge, Tenn.) would join Davis in having an efficient night, reaching double-figures for the fifth time in her debut season for the Blue and Gold by scoring 14 points in making six of her eight shots. The rest of the Buccaneers, though, couldn’t find the range, converting on just four of their 33 shots from the field and knocking down just one of their 14 three-point attempts.

Furman was led by the double-double of Tierra Hodges, who scored 19 points and snagged 11 rebounds, the Paladins playing strong team basketball that saw the hosts assist on 16 of their 24 field goals.

The Bucs and Paladins meet for the back-end of their two-game set Sunday at 2 p.m. inside Timmons Arena.