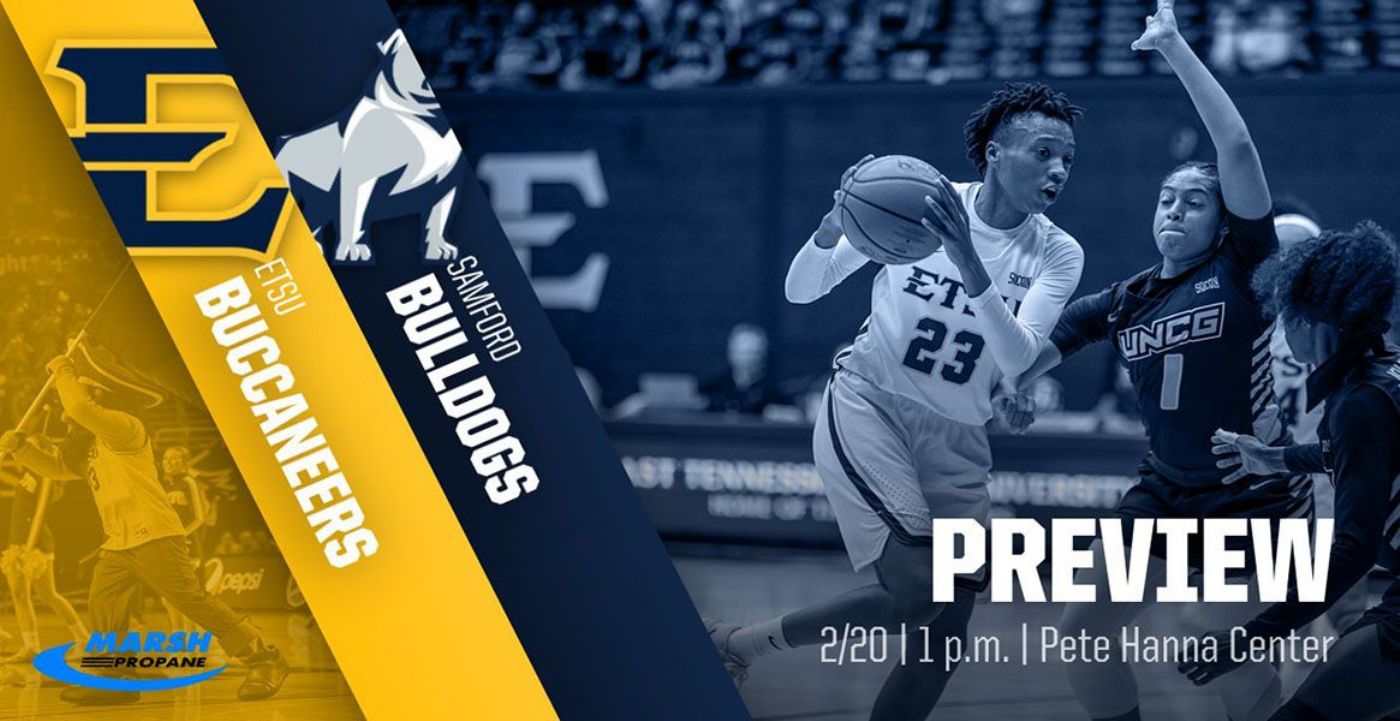 Bucs Head To Samford for Road Clash with the Bulldogs
ETSU at Samford | February 20, 2021
Related Links

JOHNSON CITY, Tenn. (Feb. 19, 2021) – For the final time until the Southern Conference Tournament, the ETSU women’s basketball team gets on the road as the Bucs meet SoCon-leading Samford in Birmingham on Saturday.

ETSU looks to bounce back after coming off a road sweep at the hands of the Furman Paladins. Despite a 25 point, 14 rebound performance from freshman Jakhyia Davis (Knoxville, Tenn.), the Blue and Gold were unable to close the gap against the Paladins in the opening game between the two, while struggles offensively hampered the Bucs in the second matchup on their way to a nine-point loss.

The Bucs are paced offensively by Jasmine Sanders (Charlotte, N.C.). The junior guard averages 10.2 points for the Bucs, the only ETSU player averaging double-figures. Dowdell continues to be a reliable presence, scoring 9.5 points while grabbing a team-best 5.6 rebounds per game. Both Davis and Carly Hooks (Atlanta, Ga.) average 8.2 points per game currently in their rookie campaign, the highest scoring freshman duo behind Sydney James and Tate Walters of Furman.

ETSU remains amongst the conference leaders in rebounding, averaging 38 per game to rank third in the SoCon. Nationally, the Blue and Gold rank as one of the best teams when it comes to forcing opponents into turnovers. Ranking first in steals in the conference at 9.6 and a second-best 1.21 turnover margin, ETSU heads into the weekend 21st in the country in forced turnovers, averaging 20.36 takeaways per game.

Samford sits on top of the Southern Conference standings, in large part to two big pieces that transferred in prior to the season. Leading the conference with a staggering 18.5 points per game, Andrea Cournoyer has settled into the Bulldog frontcourt comfortably, her first year in Birmingham after transferring from Louisiana-Lafayette. Annie Ramil also enters her first season for Samford, scoring 11.6 points while securing a team-high 8.6 rebounds per game. Natalie Armstrong rounds out the third member of the squad in the top ten in scoring in the conference, adding 12 points and six rebounds.

Slipping up in their first game of the series against Wofford, the Bulldogs responded in the Saturday matchup, scoring 80+ in conference play for the third time in the conference campaign in a 80-55 rout in Spartanburg. Offensively, Samford leads the SoCon in a host of categories, including points per game (69.3), field goal percentage (44.3%), three point percentage (35.6%) and three point field goals made (7.2). The Bulldogs are also one of the best rebounding teams, second in both rebounding offense (38.0) and defense (35.2), only one of four teams to have a positive rebounding margin.

In a relatively modern history between the sides, the two have only met once outside of the Bucs rejoining the Southern Conference in 2014-15. With that meeting going to Saturday’s hosts, Samford holds an 8-6 advantage over the Blue and Gold. The home side is 4-2 in both of their gyms in the matchup, Samford besting ETSU twice in two opportunities on a neutral site.

Last season, the Bucs traveled to Birmingham on the second part of the longest journey within the Southern Conference, having beaten Mercer in exclamatory fashion two nights prior. However, that energy was not picked up on the second half of the road trip, ETSU losing by 34 to suffer its worse defeat in conference play since returning. Samford bested the Bucs at home as well, beating ETSU 76-60 before the Blue and Gold made a memorable comeback on senior day vs. Mercer two days later.

Saturday’s 1 p.m. ET matchup in the Pete Hanna Center will be streamed live online on ESPN+. Curt Bloom and Emily Swain will be on call, with a link to the games below. The Bucs will be without a broadcast on 640 WXSM for the standalone contest against the Bulldogs.