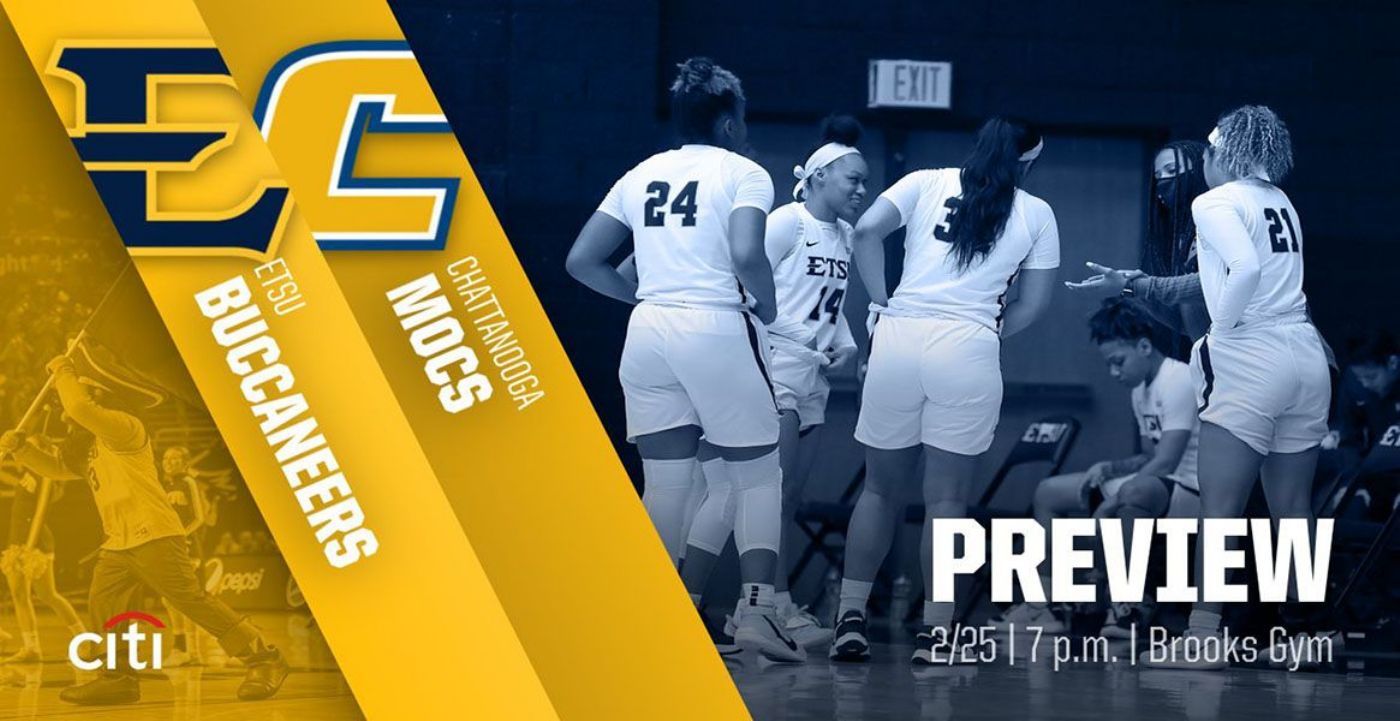 The busy week continues for the Bucs, who traveled last Saturday to take on Samford. The game tomorrow night against the Mocs is sandwiched between two other home games, a 62-48 loss on Tuesday night against Western Carolina and a noon contest against Mercer on Saturday, Feb. 27.

After entering Tuesday’s contest with a 13-game win streak at stake against the Catamounts, the visiting team looked prepared to end the drought, shooting a season-high 50% from the field at the expense of the Bucs. With just a two possession Catamount lead separating the sides with over a minute to play in the third quarter, Western Carolina triggered a quick 6-0 spurt to end the quarter, opening the fourth with a 10-2 run on their way to their first win over the Blue and Gold since December 1st, 2013. ETSU will be looking to get that taste out of their mouths, hoping to take it out on in-state rival Chattanooga in Thursday night’s showdown.

Jakhyia Davis (Knoxville, Tenn.) nearly reached her third double-double of the season and second in as many games against the Catamounts, coming up one rebound short in her 10 point, nine rebound effort to lead the Bucs in both scoring and rebounding. Carly Hooks (Atlanta, Ga.) finished with seven points, the two combining for 17.5 points per game as the second-most potent freshman duo in the league. Despite an absence on the offensive side of the ball as of late, the Bucs are still led in scoring by Jasmine Sanders (Charlotte, N.C.), who averages 9.4 points per game.

Receiving attention as one of the early frontrunners in the conference, Chattanooga has slightly underperformed from media and coaches’ expectations. That being said, the Mocs enter comfortably in third, holding a 8-5 record in conference play (13-9 overall). After brushing off the UNCG Spartans at home last Friday, the Mocs were stunned by the Greensboro side in the Sunday matchup, only scoring 50 points on the way to a 58-50 upset on their senior day. Chattanooga looks to enter the SoCon tournament on a winning note, facing their final regular season test when the Bucs host them inside Brooks Gym.

Chattanooga enters with the third best scoring offense in the SoCon, shooting 42.1% from the field (2nd in SoCon). Led with three scorers in the top-15 in conference rankings, Preseason All-SoCon selections Eboni Williams (13.0 ppg, 7th in SoCon) and Bria Dial (11.6 ppg, 9th in SoCon) pace the offense while Abbey Cornelius adds 10.3 points per contest, collecting 8.5 rebounds per game to put her third in the conference. Sigrun Olafsdottir generals the Mocs, leading the team with nearly three assists per game. Despite the potential for a potent offense, Chattanooga is coming off their worst shooting percentage in league play, hitting only 30.5% from the field in the loss to UNCG.

ETSU’s rematch with Chattanooga houses the Blue and Gold’s official Play4Kay game. In the annual event, the Bucs will don pink shooting shirts in pregame warmups and pink accessories in-game to show solidarity against breast cancer and raise awareness in the fight against the deadly disease.

Fans can support the cause by wearing pink to the Bucs meeting with Chattanooga or by clicking here to donate to the Kay Yow Cancer Fund.

For the 89th time, the two sides will face one another when the Mocs and Bucs battle inside Brooks Gym Thursday night. The historic matchup marks the Bucs’ most faced adversary in their program history, the series with Appalachian State falling just behind. Chattanooga owns a healthy lead in the series, holding a 64-24 lead against their in-state conference foes. After a Buccaneer loss on the road earlier this season, ETSU looks to avenge the result on their home floor, where they are 14-27 all-time against Chattanooga.

Thursday’s tip-off inside Brooks Gym will be streamed live online on ESPN+. Jay Sandos and Bruce Tranbarger will be on call in the matchup on ESPN+, with a link to the game below.

Tune in to 640 WXSM and join Mike Gallagher on the call for the Buccaneer Sports Network with the Atmos Energy Pregame Show starting at 6:30pm on Thursday. Gallagher will give a review of the season thus far, preview the contest at hand and have a full breakdown of the contest with Coach Ezell.