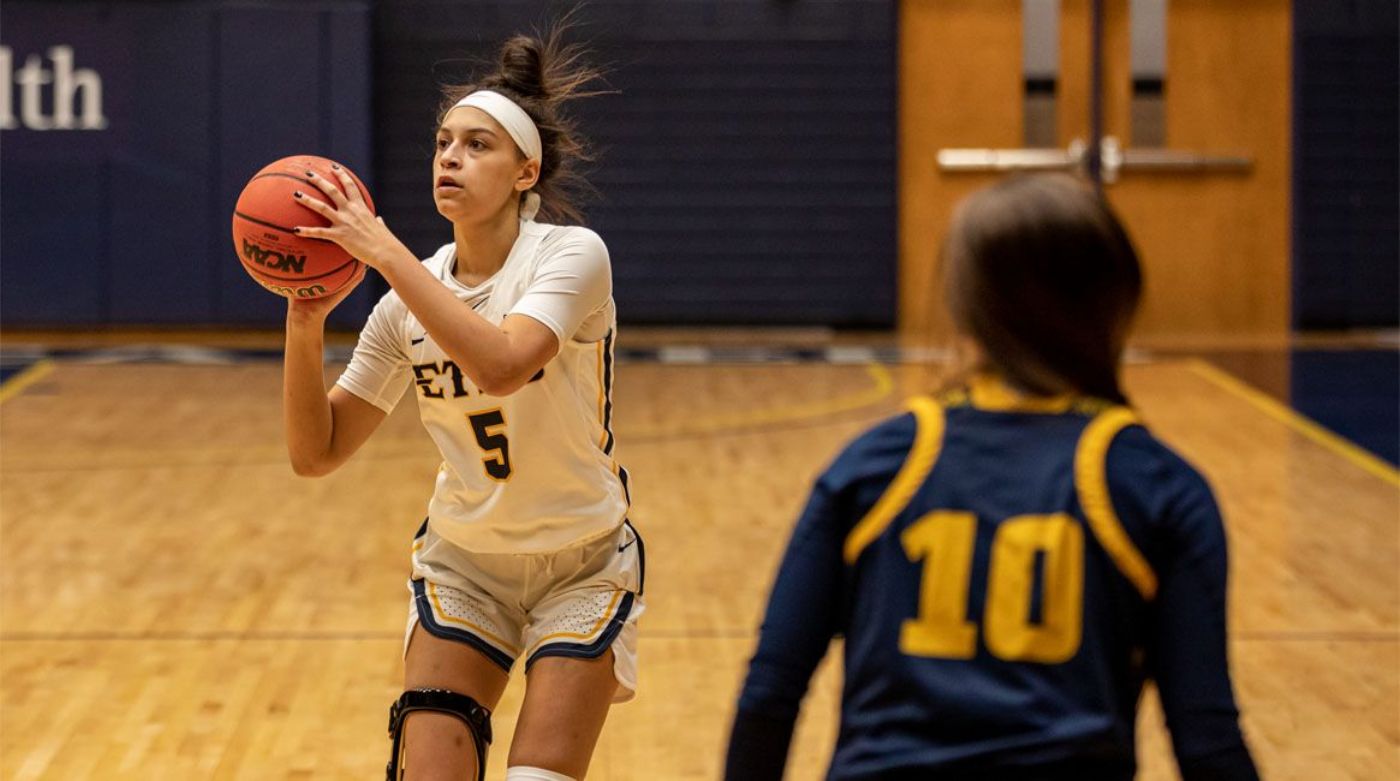 JOHNSON CITY, Tenn. (Feb. 25, 2021) – In the penultimate game of the regular-season for the ETSU women’s basketball team, the Bucs fell short in a 65-54 defeat to in-state rivals Chattanooga on Thursday evening inside Brooks Gym.

After a 40 minute delay in action to start the contest due to a COVID related concern in the travelling party, the two sides were given the all clear to begin the game at 7:40 p.m.

Leading by as much as eight midway through the second, the Bucs suffered a 15-2 run to end the second quarter as the visitors never looked back, never trailing again en route to their double-digit win.

The Mocs shot 23-54 from the field, good for a 42.6% clip. Chattanooga doubled the attempts and makes ETSU had from the charity stripe, finishing 12-18. From deep, the Mocs hit seven of their 20 attempts at a rate of 35%.

Both teams grabbed 37 rebounds in the contest, ETSU winning the offensive glass battle by an 11-6 margin. The five extra rebounds offensively only attributed to a 9-4 advantage in second chance points for the Bucs.

The Blue and Gold were the creators of their own demise, turning the ball over 21 times to the Mocs. Chattanooga used the advantage in takeaways and turned it into a 24-13 discrepancy in points off turnovers.

The Bucs assisted 14 of their 20 made baskets, led by Imani Williams (Kankakee, Ill.) and her four dimes, a career-best.

ETSU falls to 3-14 (1-9 SoCon) on the season, while UTC improves to 14-9 (9-5 SoCon). With the loss, the Bucs are guaranteed the eighth seed headed into the tournament, while Chattanooga solidified their third place status heading into next week’s championship.

Tying her career-best, Carly Hooks (Atlanta, Ga.) finished with a team-high 16 points for the Bucs on only nine shots. The freshman also finished with a career-high six rebounds.

Jakhyia Davis (Knoxville, Tenn.) paced the team in rebounding with eight boards. The freshman struggled from the field, shooting just 1-12 on the evening.

Coming off her first game since a January 14th matchup with Wofford due to a knee injury, Abby Carrington (Westlake, Ohio) scored a career-best nine points on 3-4 shooting from behind the arc, all in the fourth quarter.

Dena Jarrells led the way for the Mocs with a game-high 17 points. Bria Dial and Abbey Cornelius finished with 15 and 10 points respectively, the latter pacing the Mocs with eight rebounds.

The Mocs opened the scoring two minutes in through Amaria Pugh, breaking the deadlock between the two sides. After a maligned performance from deep two nights ago, the Bucs opened the game on fire as Hooks knocked down as many threes as ETSU hit all game against the Catamounts, her two triples en route to an 8-0 run for the hosts. After the Mocs responded with a 12-0 spurt of their own, the Bucs steadied the storm in large part to the freshman guard. Hooks scored 11 points in a quarter, her largest 10 minute output in her career. The Atlanta native capped off 11 straight points from the Bucs to end the quarter, draining a three with just over a second remaining in the opening frame.

In the opening possession of the second, Mykia Dowdell (Oak Ridge, Tenn.) continued where the Bucs left off, hitting a corner triple to extend the lead. The advantage increased to as much eight midway through the second, Kaia Upton (Nashville, Tenn.) taking the rock coast-to-coast uncontested. With foul trouble looming for Davis and Hooks, the visitors chipped away at the lead, able to trim the deficit to three before a Sigrun Olafsdottir trifecta tied the game at 25. Chattanooga scored the next five points to end the quarter on 12-0 run, taking a 30-25 lead into the break.

Coming out of the break, the Bucs were able to trim the lead with just over seven minutes on the clock. Dowdell’s offensive put back would be the last field goal until 19 seconds in the third, Hooks finishing through contact for an and-one. The Mocs had the final say of the quarter, Williams grabbing the offensive rebound on an errant three before collecting and finishing the play before the time expired. Chattanooga ended the quarter on a 14-3 run to take a 47-33 lead into the final frame.

Despite a hot shooting performance from Carrington (3-4 from behind the arc in the fourth quarter), the Bucs were only able to trim the lead to 11 points after Brown collected an and-one with just over 10 seconds left, falling to the Mocs 65-54.

ETSU hosts their third of three-straight home games this week, taking on Mercer in a noon contest on Saturday, where the Bucs will host their senior day for lone senior Kelly Post.