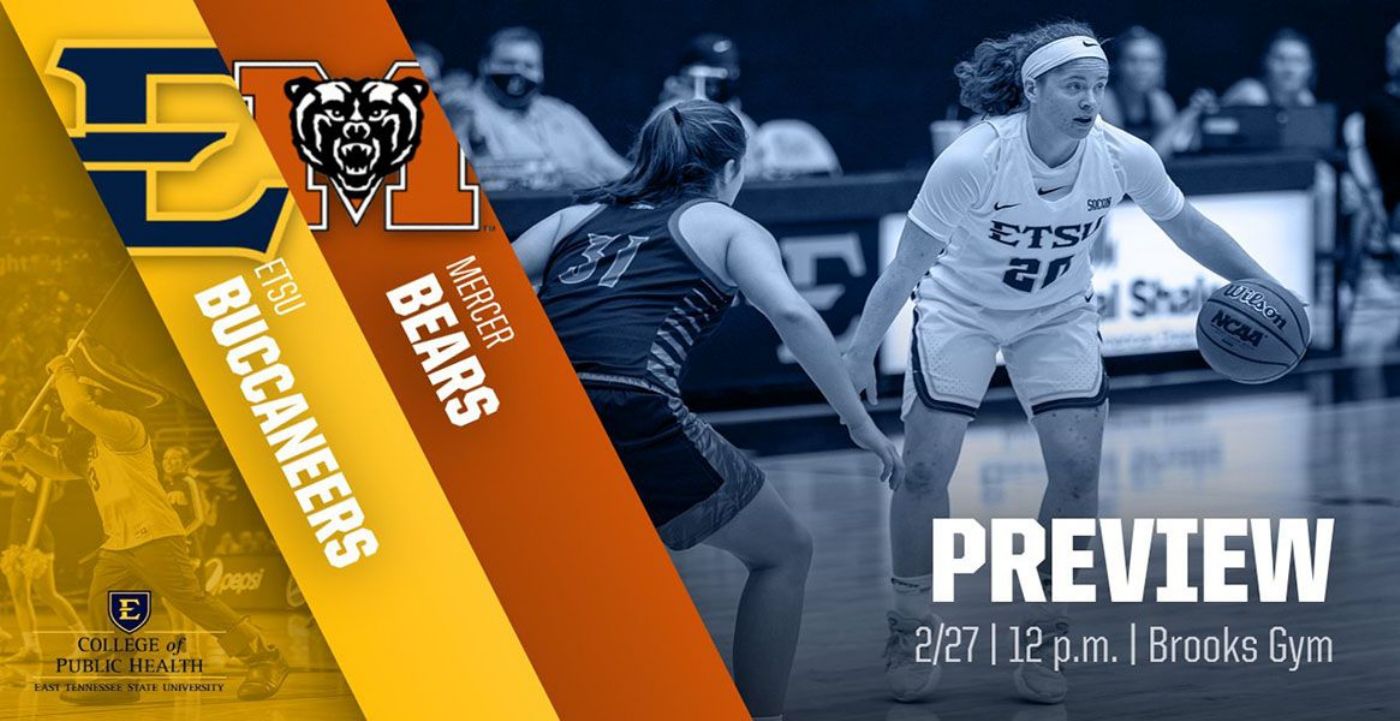 JOHNSON CITY, Tenn. (Feb. 26, 2021) – Entering the program as a grad transfer, the ETSU women’s basketball team is set to recognize Kelly Post (Fayetteville, N.C.) in their season-finale against Mercer inside Brooks Gym on Saturday afternoon.

Post, who had her season-best performance against Furman earlier this month with seven points, four rebounds, four steals and three assists, is the only senior being recognized in an otherwise young group for the Buccaneer side.

Both sides enter the season-finale knowing exactly where there fate lies within the conference tournament ranking. The visitors cemented their #2 seed after their loss to Samford on Thursday night, while ETSU’s loss to Chattanooga officially enters them as the #8 seed next week in Asheville.

Carly Hooks (Atlanta, Ga.) matched her career-high on Thursday evening, scoring 16 points on only nine attempts in the 65-54 loss to the Mocs inside Brooks Gym. Leading by as much as eight in the middle of the second quarter, foul trouble hindered the Bucs, allowing the Mocs to climb to a five point advantage before the break, never looking back in the second half on the way to the 11-point win. In a positve note, the Blue and Gold returned the serivces of Abby Carrington, who played in her first game since January 14 against Wofford after a knee injury kept her on the sideline. The freshman went 3-4 from three in the fourth quarter, scoring a career-high nine points in seven minutes of action.

Hooks has taken over as the leading scorer for ETSU this season, averaging 9.1 points per game for the Blue and Gold. The freshman guard joins Jakhyia Davis (Knoxville, Tenn.) in making one last impression before the All-Conference teams are announced, each up for selection onto the All-SoCon Freshman team. Davis contributes a team-high 6.2 rebounds per game, adding 8.4 points per contest. The two are the second-highest scoring freshman duo in the league, ranking behind Furman’s Sydney James and Tate Walters. The lone nominee for All-SoCon team for ETSU, Mykia Dowdell (Oak Ridge, Tenn.) looks to shake off a quiet February, having failed to record double-digit scoring numbers in the last three games after putting up 25 points combined on the road trip at Furman.

ETSU heads into the final day of the season having been persistent pests on the defensive side of the ball. Nationally, the Blue and Gold rank as one of the best teams when it comes to forcing opponents into turnovers. Ranking first in steals in the conference at 9.8 and a second-best 1.53 turnover margin, ETSU heads into the weekend 24th in the country in forced turnovers, averaging 20.00 takeaways per game.

A team that finished seventh in the SoCon a year ago, the Mercer squad is a revamped squad despite returning their core from the 2019-20 season. The Bears bring in the second-best scoring offense and defense, collecting a SoCon-high 9.5 scoring margin per game. One of the best shooting teams from deep, Mercer knocks down 32.1% of their outside opportunities, trailing only Samford. The Bears rebound the ball well (38.7 rpg), are a conference leader in blocked shots (4.3) and assists (14.4), and trail only the Bucs in steals per game, collecting 8.5. Nationally, the Bears rank 17th in assist-turnover ratio (1.27), 6th in turnover margin (7.38) and 7th in turnovers per game (11.3).

The Bucs look to take the advantage in the series history on the weekend, with a win putting the series history even between both squads. Entering the Saturday contest, the Bucs face a 20-21 record over Mercer, only fine margins separating the two programs. In similar fashion, the records remain near inseparable in both Johnson City and Macon. ETSU holds the slight advantage in Brooks Gym, a 10-9 record at home. Conversely, the Bears home record is 9-7 inside Hawkins Arena, while each team has collected three wins in neutral territory.

ETSU comes off a series sweep over the Bears in the 2019-20 season, breaking a duct of eight straight losses for the Blue and Gold against Mercer. In need of an offensive boost, ETSU can look to last season's opening game against Mercer for some remedy as they enter the weekend. Snapping an eight-game losing streak to the Bears in Macon Jan. 23, the Bucs would score 72 points, one of just two times they would break 70 against a Division I opponent in regulation all season. Efficiency was the catalyst for the visitors that day, the Bucs shooting 44 percent from the floor, 55 percent from three-point distance and 93 percent from the free throw line, all numbers they have yet to reach in any, let alone the same, game this season.

GEORGIA ON MY MIND

Saturday’s noon tip-off inside Brooks Gym will be streamed live online on ESPN+. Jay Sandos and Bruce Tranbarger will be on call in both matchups on ESPN+, with a link to the games below.

Be sure to tune in to 640 WXSM this weekend and join Mike Gallagher on the call for the Buccaneer Sports Network with the Atmos Energy Pregame Show starting at 30 minutes prior to Saturday’s contest. Gallagher will give a review of the season thus far, preview the contest at hand and have a full breakdown of the contest with Coach Ezell as well as a preview of the SoCon Tournament in Asheville.