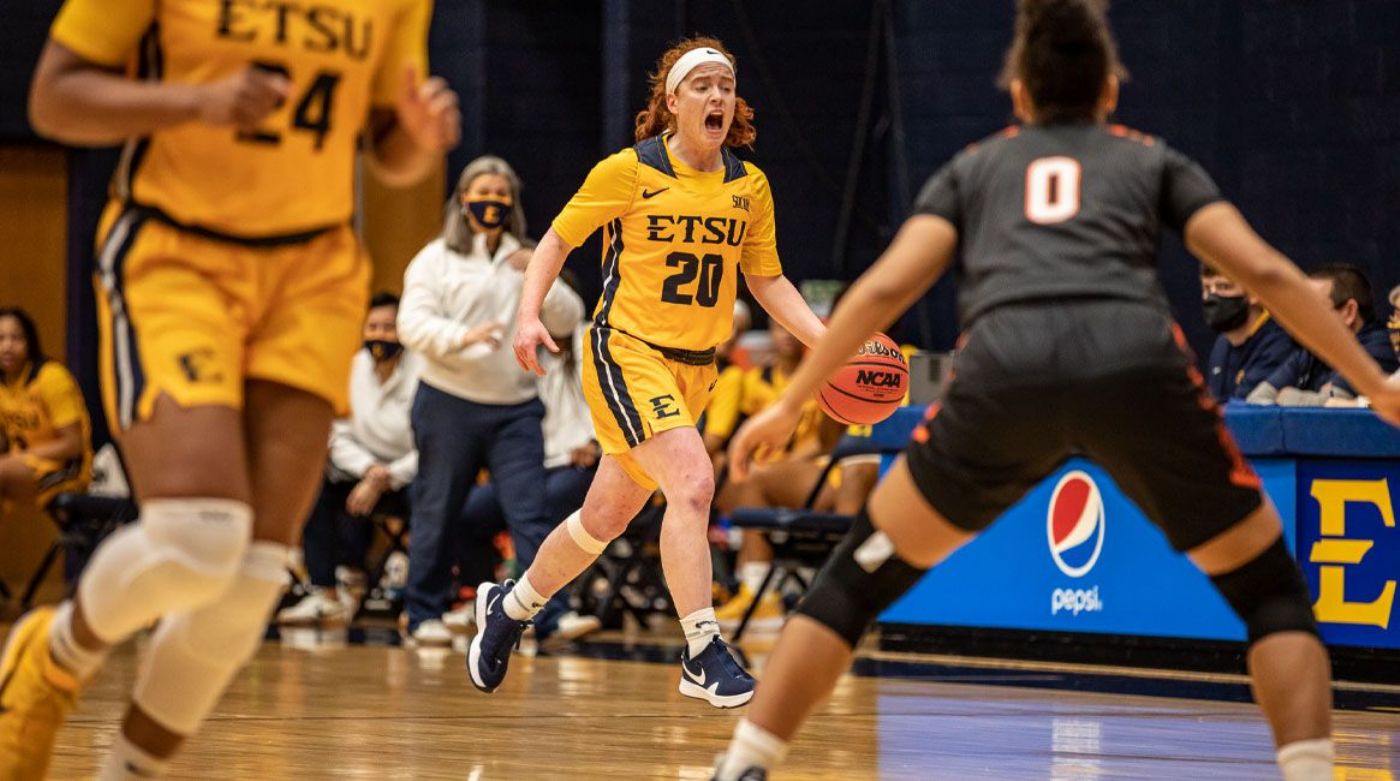 JOHNSON CITY, Tenn. (Feb. 27, 2021) – Sometimes, season finales don’t live up to the billing. But on Saturday afternoon inside Brooks Gym it did just that.

The ETSU women’s basketball team nearly pulled off a remarkable double-digit comeback, their bid falling just short to the Mercer Bears in 76-73 fashion inside Brooks Gym.

In a day that started with celebration as the Bucs honored the career of Kelly Post (Fayetteville, N.C.), the only senior for the Buccaneer side, it appeared as if that might be a day-long theme after the guard snapped the opening eight points for the Bucs. Despite facing an 11-point deficit entering the fourth quarter, the Bucs quickly vanquished the deficit and took the lead late in the quarter. The Bears scored the final five of six points to sneak out of Brooks Gym, narrowly avoiding the upset.

ETSU completed their vigorous challenge of a week, faced with their fourth game in eight days in the contest against Mercer. The Bucs now get a five-day rest before facing Samford in the opening round of the SoCon Tournament on Thursday.

ETSU had their highest scoring output of regulation in season play on Saturday afternoon, scoring 73 points against the Bears. The previous best was 69 in the New Year’s Eve affair against Newberry. Only the double-overtime loss to Wofford on Jan. 16 saw the Bucs score more points, finishing that matchup with the Terriers with 78.

The Bucs shot 23-56 (41.1%) from the field, only the fourth time all season and second in SoCon play that ETSU knocked down more than 40% of their opportunities. After starting 3-8 from three in the first quarter, the Bucs cooled to 5-22 (22.7%) from deep on the afternoon.

ETSU both attempted and made their most free-throws on the season, combining for a 22-30 (73.3%) mark from the charity stripe.

The Blue and Gold outrebounded the Bears 46-36 grabbing 18 second chance opportunities. The Bucs only converted the 18 offensive rebounds to 14 second chance points.

Entering as a top-ten team in the nation in taking care of the ball, Mercer only allowed nine turnovers compared to the 21 they forced ETSU into. Both sides were incredibly efficient in taking advantage, the Bucs scoring 12 points off the nine takeaways, while Mercer produced 29 points off the 21 ETSU turnovers.

ETSU finished with a season-high six blocks on the afternoon, half coming through the freshman Jakhyia Davis (Knoxville, Tenn.)

Davis tied a team-high with 12 points, grabbing her joint-best rebounding performance with 14 karoms. It was her third performance of the year registering a double-double, the only Buc to accomplish 10-and-10 on the year.

Shynia Jackson (Warner Robins, Ga.) continues to play her best ball against the team right outside of her backyard. The junior finished with 12 points and five rebounds to help pace the Buccaneer offense.

After scoring the first eight points for ETSU, Post finished with 10 points on the day, a season-high for the guard. She also finished with a season-mark of five rebounds while proving to be flawless from the line, hitting all four attempts.

Amoria Neal-Tysor led all scorers on the day, knocking down 25 points on 10-25 shooting. Titus added to two huge defensive plays for the visitors at the end of the game, scoring 18 points while collecting five rebounds, five steals and three assists. Jada Lewis scored the eventual game-winning bucket on the way to her 14 point performance, while Jaron Dougherty also finished in double-digits with 12 points.

After a round of applause just prior to the game for Post in celebration of senior day, the grad transfer guard garnered even more after knocking down the first eight points for ETSU, including two from deep. Hooks joined the party the next possession, hitting from the wing to give the hosts an 11-8 lead. After a strong post move from Davis to put ETSU up 15-10 with just over five minutes remaining, the Bears responded with two 6-0 runs in between four points from the Blue and Gold to take a 22-19 lead into the end of the first quarter. The Bucs shot 50% in the opening frame, led by Post’s eight points and four rebounds.

Trading shots in the opening minutes of the second, Jackson cut the Mercer lead to three after finding space to shoot over her defender, tickling the twine on the way down. The visitors responded by making four of their next five baskets, extending the lead to eight before each side traded a pair of free throws in the last 30 seconds of the half, Mercer entering the locker rooms with a 44-36 advantage. ETSU recorded their fourth-best scoring half of the season, bested by the eventual 37 point second half against the Bears, a 39 second half against Longwood and a 40 point burst in the first half against Wofford.

Mercer extended their lead to double-digits on the other end of the break, scoring the opening four points of the third quarter. With the lead stretched to as much as 13 with 2:00 on the clock, the Bucs held the Bears out for the rest of the quarter, but were only able to grab one basket as the Bears entered the final 10 minutes up 64-53.

The Bucs came out of the gates on fire in the fourth, opening with nine of the first 10 points to cut the lead to three with over six minutes to play. After E’Lease Stafford (Lawrence, Kan.) cut the deficit to one with a pair of free throws, Imani Williams (Kankakee, Ill.) gave the Bucs their first lead since 1:45 left in the first quarter after stealing an inbounds pass and taking it the length of the floor to put ETSU up 70-69. Williams grabbed the last basket for ETSU to give another lead for ETSU, but Mercer scored five of the next six points to give the Bears a three-point lead, giving ETSU one last attempt to send the game into overtime. A contender for SoCon Defensive Player of the Year, Shannon Titus switched onto Hooks’ final heave from three, blocking the attempt and sprinting to the other end of the court as time expired to sneak a win for her side, 76-73 inside Brooks Gym.

ETSU faces #1 seed Samford in the conference tournament, the first round matchup set for a Thursday, March 4th 12 p.m. tipoff in the Harrah’s Cherokee Center Asheville in Asheville, N.C.