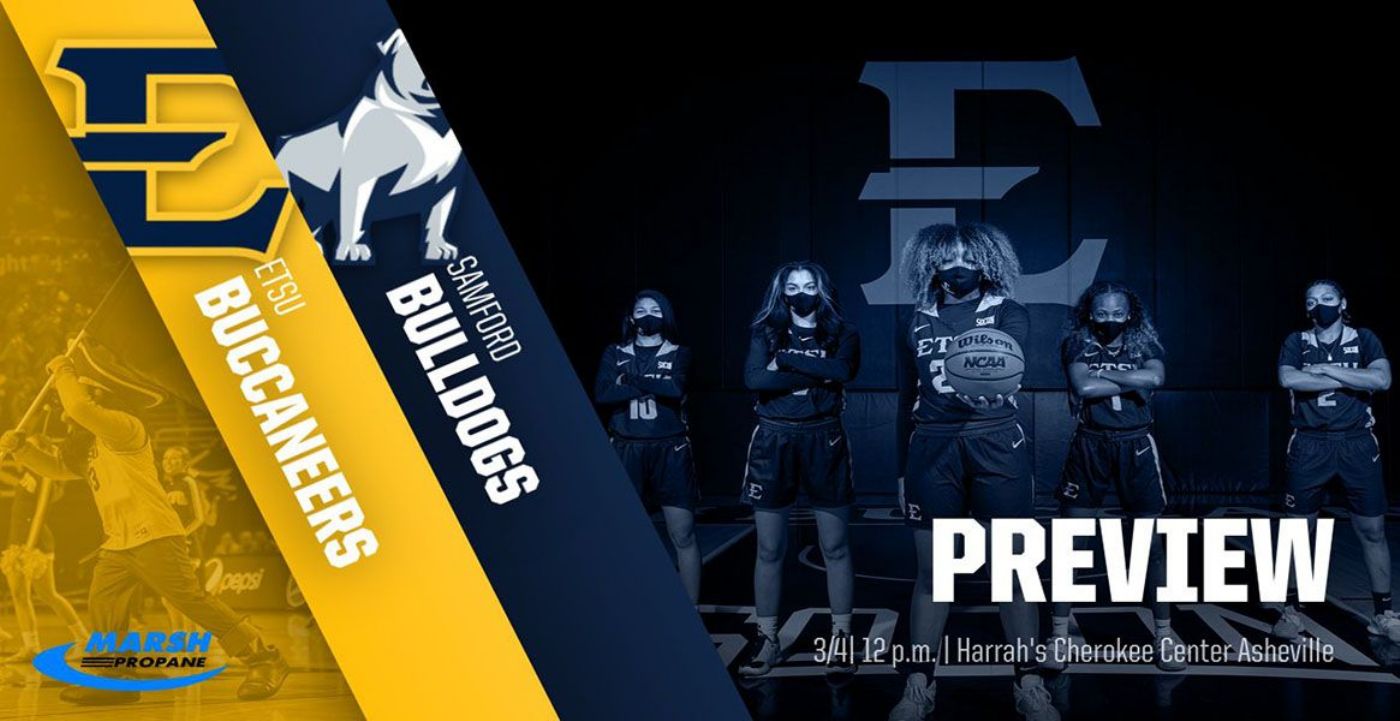 Bucs Look To Bite Back Against Bulldogs in Postseason Play
ETSU at Samford | March 04, 2021
Related Links

JOHNSON CITY, Tenn. (Mar. 3, 2021) – Out for revenge, the ETSU women’s basketball team looks to avenge their loss to Samford just a few weeks prior, facing the Bulldogs in the opening round of the Ingles Southern Conference Basketball Championships presented by General Shale Brick. The two sides clash in a noon battle on Thursday inside the Harrah’s Cherokee Center Asheville.

ETSU will enter on a six-game losing streak, but have potentially their most-productive game of the season fresh on their mind. Despite the result, the Buccaneer offense took Mercer to the limits, scoring a season-high in regulation in the 76-73 defeat to the Bears inside Brooks Gym. With the addition of Courtney Moore (Gainesville, Fla.), the Bucs will be at full selection for the first time since January 14th in their contest against Wofford.

Kelly Post (Fayetteville, N.C.) celebrated her senior day early against the Bears, scoring the first eight points for the Blue and Gold. ETSU raced to a 15-10 lead, but the visitors slowly crept into the game to take as much as an eight-point lead heading into the half. After looking like they were about to cruise their way to a comfortable victory, the Bears succumbed to Buccaneer pressure late in the third, unable to score the final two minutes of the frame. ETSU took the momentum into the fourth, rattling off nine of the first 10 points to cut the lead to three. The Bucs took their first lead of the game with just over two minutes to play, sending the limited crowd allowed inside Brooks Gym into a frenzy. However, two plays by SoCon Defensive Player of the Year Shannon Titus inside the last 20 seconds quashed any chance at a final Buccaneer dagger, allowing only a moral victory for the Blue and Gold after walking off their home court one last time on the season.

For the third time this year, Jakhyia Davis (Knoxville, Tenn.) ended the game with a double-double, registering 12 points and 14 rebounds on the afternoon. The freshman leads the team in rebounds with 6.6 per game, adding 8.6 points per contest as she was selected to the Media All-Freshman team. Carly Hooks (Atlanta, Ga.) joins her rookie teammate, making both the Coaches and Media All-Freshman Team after leading the Bucs in scoring on the season, averaging 9.1 points per game. The guard increased her tally in league play, the only Buc to score in double-figures (10.6) in SoCon action. Up for nomination for a SoCon All-Conference selection, Mykia Dowdell (Oak Ridge, Tenn.) has been a steady force for the Blue and Gold, scoring 8.3 points while collecting 5.4 rebounds a game.

ETSU heads into the conference tournament as one of the best in the country at badgering opposing offenses. Nationally, the Blue and Gold rank as one of the best teams when it comes to forcing opponents into turnovers. Ranking first in steals in the conference at 9.6 and a second-best 0.78 turnover margin, ETSU heads into the weekend 34th in the country in forced turnovers, averaging 19.34 takeaways per game.

Looking to defend their crown, Samford enters as the reigning SoCon Tournament Champions, defeating UNCG last season to give them a ticket to the NCAA Tournament. With the halt of the sporting world, the Bulldogs will be eager to pick up where they left off en route to a March Madness appearance. Samford enters the tournament on a strong note, beating Mercer on the Bears’ home floor to secure the #1 seed heading into the tournament. The nine-point win is their smallest margin of victory in their three-game win streak they enter the tournament averaging 77 points per game in the win streak.

Samford junior guard Andrea Cournoyer has provided a spark for the team this season. The Louisiana-Lafayette transfer currently leads the Southern Conference in scoring (18.0 ppg.), steals per game (3.0) and three-pointers made per game (2.2). She has scored in double figures in 16 of the 19 games she has played in, including a career-high 34 points against Furman. A returning force, Natalie Armstrong joined her teammate in winning SoCon All-First Team honors with a 13.1 point, 6.6 rebound average. Annie Ramil also enters the SoCon top 10 in each category for the Bulldogs, contributing 11.7 points and 8.4 rebounds per contest.

Samford leads the all-time series 9-6, carrying a three-game winning streak into the contest with an average margin of victory in those three of 23 points. This is the second postseason matchup between the two sides, the Bucs being upset in the first round of the SoCon tournament back in the 2016-17 season as Tianna Tarter missed a three at the buzzer that would’ve tied the game and sent it to overtime, ETSU’s comeback effort falling short 67-64 as they trailed by as many as 21.

When the two sides met earlier this season in Birmingham, ETSU ran out to a quick 11-3 lead over Samford, holding on to that advantage midway through the second quarter. Led by the duo of Cournoyer and Armstrong’s 38 points, the Bulldogs rattled off the first 15 points of the second half on their way to a 77-58 victory inside the Pete Hanna Center.

BUCS IN THE POSTSEASON

ETSU’s record all-time in conference tournament play is 30-34, 19-28 in SoCon tournament history. The Blue and Gold have appeared in the championship game nine times, five of those coming in the SoCon. As an 8-seed ETSU has won three times. Their first win coming in the 1996-97 season over #1 Furman, the Bucs then accomplished the feat twice in the 2004-05 season. ETSU opened their campaign against #9 Appalachian State in an overtime win before knocking off #1 Chattanooga 55-50 in their last year in the SoCon before departing for the A-Sun.

Thursday’s noon tip-off inside the Harrah’s Cherokee Center Asheville will be streamed live online on ESPN+. Pete Yanity and Robin Muller will be on call on ESPN+, with a link to the game below.

Be sure to tune in to 640 WXSM over the course of the tournament and join Mike Gallagher on the call for the Buccaneer Sports Network with the Atmos Energy Pregame Show starting at 30 minutes prior to Thursday’s contest. Gallagher will give a review of the regular season, preview the contest at hand and have a full breakdown of the contest with Coach Ezell.