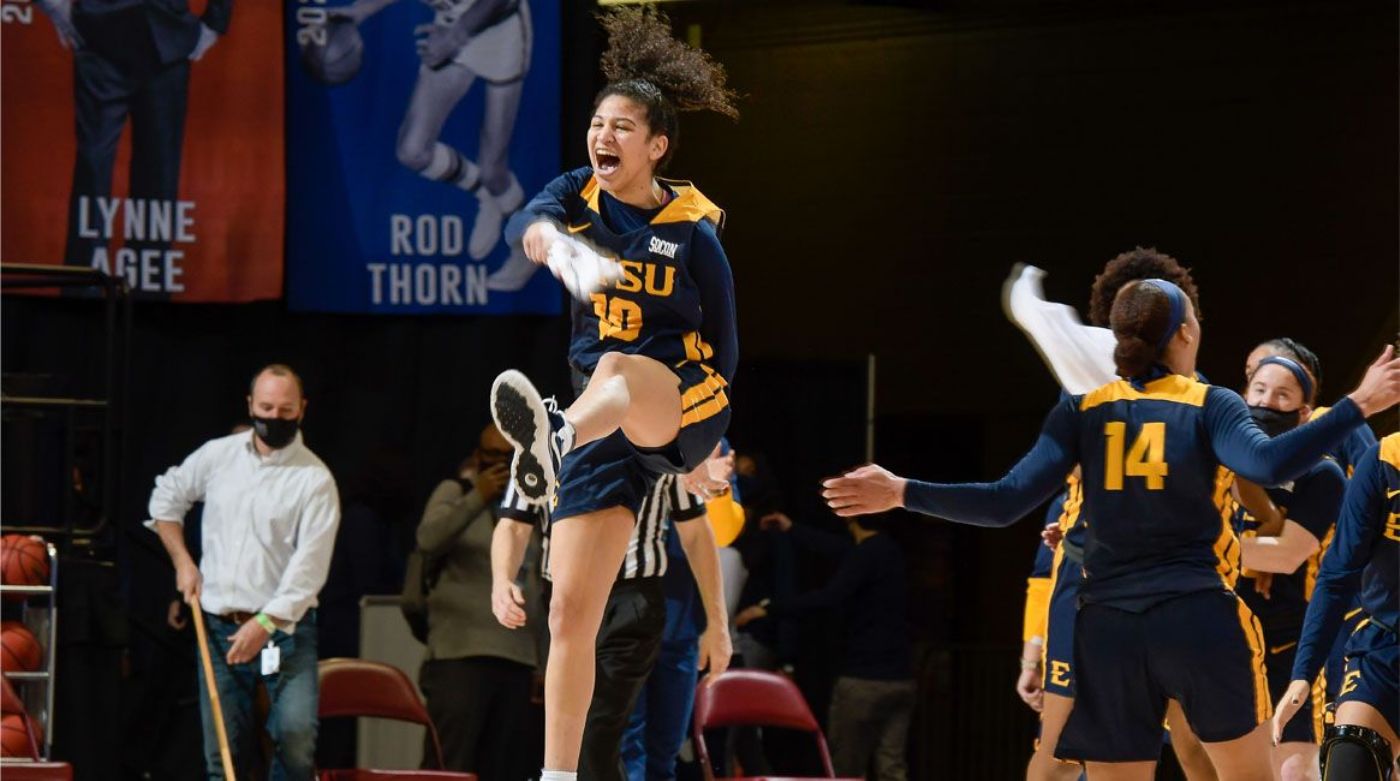 ASHEVILLE, N.C. (March 4, 2021) – The month only started, but the madness is in full swing. In the time of the season where teams look to play their best ball, the Bucs delivered in their opening opportunity.

Snapping a six-game losing skid, the ETSU women’s basketball team came through when it mattered most as the Bucs advanced to the semifinals of the Ingles Southern Conference Tournament presented by General Shale Brick on Thursday afternoon, knocking off top-seeded Samford in 68-61 fashion inside the Harrah’s Cherokee Center Asheville.

A theme towards the end of the season, the Bucs came out with a strong start, punching the Bulldogs in the mouth on their way to an opening half lead. The difference came in the finish, ETSU using the third quarter to their advantage as opposed to their demise, leading for 38:41 of the contest on the way to an opening round win at the Southern Conference Tournament.

After showing shades of what they were capable of in their season-finale loss against Mercer, the Bucs put it together for all four quarters, responding to every Samford run with a counter of their own to exact revenge on their regular-season loss to the Bulldogs just under two weeks prior.

The win over the Bulldogs marks the first time the Bucs have beaten Samford in the postseason, only having played once previously in 2017. It also snaps a three-game losing streak over the Bulldogs that averaged nearly 20 points per defeat.

ETSU moves to 4-4 in postseason play in the Southern Conference when entering as the #8 seed. The last time the Bucs entered in 2005, they also knocked off the #1 seed in Chattanooga.

The Blue and Gold make their deepest run since the 2017-18 team that went to the finals, having been knocked out in the first round the last two appearances before today’s win.

Winning the third quarter has been nearly detrimental for the Bucs this season. Outscoring the Bulldogs 17-16 in the third this afternoon, the Bucs are now 3-0 when winning the third frame and 1-15 when losing it.

For the fifth time this season, the Bucs shot more than 40% from the field. Entering the game, the Bucs only registered over 60 points against a conference foe twice on the year, once in regulation. ETSU finished the afternoon 23-55 (41.8%) from the field and 6-20 (30.0%) from deep. The Bucs hit under their average in free throw percentage, clipping 16-26 (61.5%) from the line.

The Buccaneer defense made life difficult for the Samford offense. The Bulldogs were checked to just 21-59 (35.6%) from the field, their second-worst shooting performance against a conference foe this year.

Sticking to their strengths, the Bucs forced Samford into 21 turnovers, converting into 21 points for the Blue and Gold. ETSU, who was the leader in conference in steals prior to the game, grabbed 15 steals in the contest. Despite 13 takeaways given away from ETSU, the Bucs held that to just seven points from the Bulldog side. Similarly, the Bucs 16 offensive rebounds conceded to Samford only turned into six points, where ETSU made the most of their 11 second chances by cashing in 13 points.

ETSU has outscored SoCon opponents from the bench on eight of 11 attempts this season, edging the Bulldogs 16-6 in the category.

Led by Jakhyia Davis (Knoxville, Tenn.), who made an appearance on the SoCon Media All-Freshman Team, the freshman had a team-high 21 points on 9-17 shooting, including five rebounds and three steals, one that all but sealed the win for the Bucs late in the contest.

Carly Hooks (Atlanta, Ga.) helped pace the Bucs early, scoring the 13 points in the contest. 11 of her 13 points came in the opening half for the Blue and Gold, knocking down her first three three-point attempts.

For the first time this season, Amaya Adams (Kansas City, Mo.) finished in double-digits with 10 points. The junior guard played a pivotal role in the fourth quarter, knocking down all eight free throws she attempted to help keep the Bucs away from a Bulldog charge.

Kaia Upton (Nashville, Tenn.) provided a little of everything for ETSU, leading the team with five steals and four assists, also grabbing six points and a block on her way to an impressive floor general performance.

Mykia Dowdell (Oak Ridge, Tenn.) and E’Lease Stafford (Lawrence, Kan.) each led the Bucs with six rebounds, all seven of their points coming in the third quarter.

Andrea Cournoyer led the way with 31 points for the Bulldogs. The Southern Conference Player of the Year outscored the rest of her team 31-30, needing 22 attempts (9-22, 4-16 from three) to reach the mark. Cournoyer finished 9-11 from the line, adding four rebounds to her day. First Team All-SoCon recipient Natalie Armstrong finished with 14 points, eight rebounds and three blocks.

Both sides opened the game with a bucket on their first possessions before Hooks knocked down the next five points for the Blue and Gold. After back-to-back baskets from Davis to grab a five-point ETSU lead Upton knocked down both pairs of free throws after grabbing a steal and being fouled on her coast-to-coast attempt. The Bucs would reestablish their seven-point lead in the final seconds, Shynia Jackson (Warner Robins, Ga.) beating the clock with her jumper from the free-throw line to put the Bucs up 17-10 after the opening frame.

The two SoCon All-Freshman selections kept the Bucs going in the opening minutes of the second, Davis finishing the play after a Hooks offensive rebound and dish found the center from Knoxville wide open under the basket. Hooks then took her turn to grab points the next trip down, knocking down a stepback three. Jackson gave the Bucs as much as a 13-point advantage with just over eight minutes left in the quarter before Courtney Moore (Gainesville, Fla.) made her first basket in almost two months, making her first appearance since a January matchup against Wofford. The #1 seed showed their mettle, staying the course while slowly chipping away at the Buccaneer lead. With the lead to as little as four, the freshmen once again were called to action. Davis again finished in the paint before Hooks drained her third three of the contest in as many attempts, quickly nearing a double-digit lead. Samford cut the lead to five, but the Bucs took their fifth halftime lead of the season into the break in Asheville. Both Hooks and Davis led the Bucs in the opening half, scoring 11 points apiece as the Bucs shot 50% from the field and 40% from deep after 20 minutes.

Coming out of the break, both squads struggled from the field with neither team hitting more than a third of their opportunities. Despite the offensive struggles, each team went back-and-forth, the Bucs never allowing the lead to fall under three points, winning the quarter 18-17 to head into the final 10 minutes with a six-point advantage.

ETSU rode out an initial surge from the Bulldogs to begin the fourth, cutting the lead to two after just over a minute of action. Imani Williams (Kankakee, Ill.) got the offense going, leaping for the offensive rebound and finishing the play before a Davis basket put the Bucs back up to six. Davis began to take over, hitting the next three baskets to counter the Bulldog surge. The freshman post player then did it on the defensive side of the ball, cutting off a Cournoyer pass to force Samford into fouling ETSU. Able to grab a large enough lead, the Bucs used 61.1% (11-18) shooting from the charity stripe in the fourth quarter to outlast Samford on their way to their first win in the tournament since the 2017-18 season, defeating the Bulldogs 68-61.

ETSU faces No.4 Wofford in the semifinals set for a Friday, March 5th 12 p.m. tipoff in the Harrah’s Cherokee Center Asheville in Asheville, N.C.