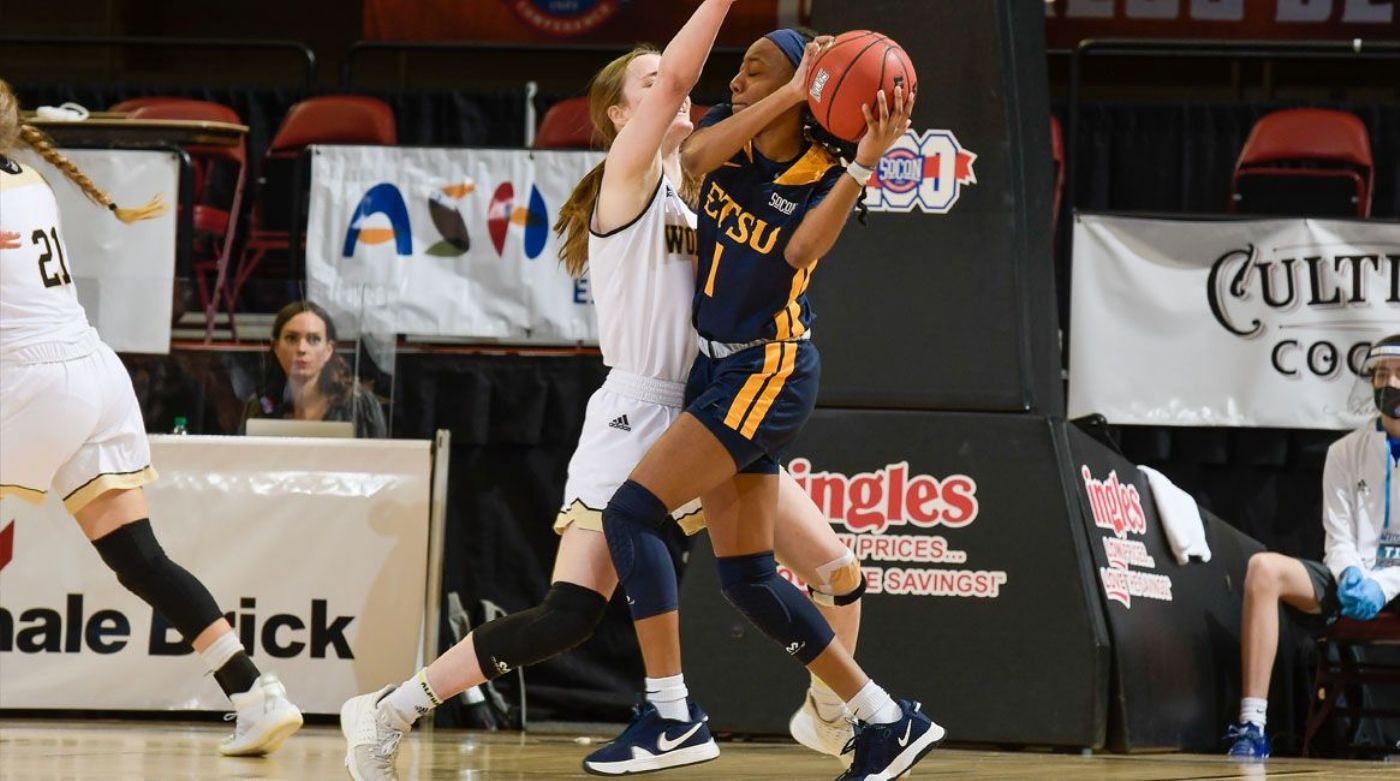 Bucs fall to Terriers in Asheville, 75-64

ASHEVILLE, N.C. (March 5, 2021) – The 2020-21 season officially came to an end for the ETSU Women’s Basketball team on Friday, March 5 in Asheville, N.C. with ETSU dropping the 75-64 decision to Wofford in the Southern Conference Semifinals.

The Bucs found themselves in the semifinal contest after knocking off regular season champions and No. 1 seed Samford, 68-61, in the quarterfinals on Thursday afternoon.

INSIDE THE NUMBERS
ETSU finished the game with a .426 clip from the field, marking the highest shooting percentage against a SoCon foe this season and second highest overall for the campaign. The defense held Wofford to just .333 (21-64) from the floor. However, the Terriers successfully knocked down 7-of-14 (.500) from beyond the arc.

Wofford owned the game on the boards, outrebounding the Bucs 48-30 throughout the contest. The Terriers pulled down 19 offensive boards, paving the way for 23 second-chance points comparted to just five for ETSU. Today marked the second time this season that Wofford reached 48 rebounds against ETSU.

The Bucs are now 4-5 in postseason play in the Southern Conference when competing as the No. 8 seed.

TOP PERFORMERS
The Bucs received a big boost from Carly Hooks (Atlanta, Ga.) who turned in a career performance with 20 points, reminding fans why she was named to the SoCon All-Freshman Team. Hooks reached the 20-point plateau on 8-of-15 shooting, doing most of her damage in the second half with 16 points on 6-of-11 from the field and 2-for-4 from the line.

Jakhyia Davis (Knoxville, Tenn.) secured her fourth double-double of the season, finishing the game with 14 points and 10 rebounds. Davis was 4-of-9 from the field but a perfect 6-of-6 at the line.

Wofford struck with balanced scoring, led by Lilly Hatton with 15 points. Niyah Lutz chipped in with 13 points, while Jackie Carman rounded out the double-digit scorers with 12 points.

HOW IT HAPPENED
First Quarter
Neither side could gain any separation in the first 10 minutes of play as the Terriers held on to the narrow one-point lead at the break. The Bucs struck first with a jumper by Hooks, followed by a Wofford triple from Lutz. Wofford built a four-point advantage, leading 11-7, before the Bucs retaliated with a 9-1 run for their own four-point lead. The ETSU scoring spurt was capped off by a three from Carrington at the top of the key. Wofford concluded the opening quarter on a 5-0 scoring run, carrying the 17-16 lead as well as the momentum into the second frame.

Second Quarter
The Terriers used the first five minutes of the second quarter to build their advantage to 10 (30-20), outscoring ETSU 13-4 early in the quarter. The Bucs were able to trim the deficit down to 35-30 following another trey ball by Carrington with 2:13 remaining in the half, capping off an 8-3 Blue & Gold spark. However, Carrington’s heave was the final ETSU basket of the quarter with Wofford pushing its lead to 38-30 at the half. The Terriers scored 10 of the 21 second-quarter points from the charity stripe, outscoring ETSU 13-0 from the line in the opening half.

Third Quarter
The Bucs trimmed the Wofford lead to five once again, early in the third quarter. However, ETSU could not claw any closer as the Terriers retaliated with a 10-0 run to reach a game-high 15 points. Wofford maintained the double-digit lead for the remainder of the quarter but the Bucs did not back down. Hooks scored 12 of her game-high 20 points in the third stanza to stay within striking distance.

Fourth Quarter
Wofford held the Bucs at arm’s length throughout the final quarter, outscoring ETSU 14-13 en route to the 11-point victory. The Bucs were led in the final quarter by Hooks and Davis, with Davis scoring four points and pulling down five boards.