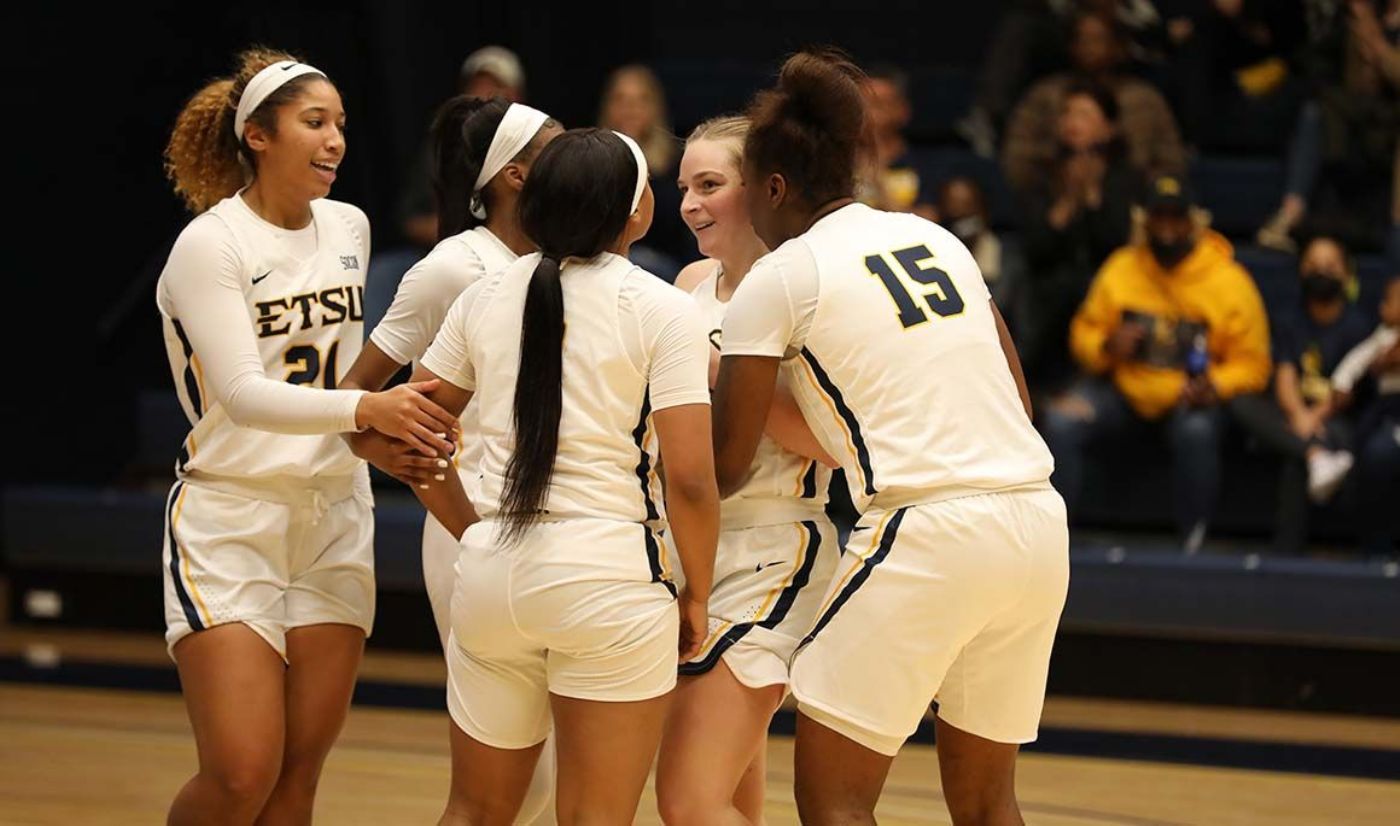 JOHNSON CITY, Tenn. (Nov. 14, 2021) – ETSU Women’s Basketball lit up the scoreboard from beyond the arc as the squad poured in 11 threes en route to a 66-54 win over Cornell on Sunday afternoon in Brooks Gym. With the win, the Bucs improved to 1-2 on the season, giving head coach Simon Harris his first collegiate win as a head coach.

PLAYER OF THE GAME
Jaila Roberts lit up the scoreboard in the squad’s home opener, finishing with a season-high 24 points to go along with five rebounds and four assists. Roberts netted a team-high four triples in her first game inside Brooks.

HOW IT HAPPENED
ETSU jumped out ahead after Jaila Roberts (Pensacola, Fla.) took the lid off the basket with her first of four threes at the 8:38 mark. The Bucs used that shot to go on an 11-4 run to open the first seven minutes of the game. The Bucs closed out the first quarter of play with a 16-9 edge, thanks to another three, this time from Courtney Moore (Gainesville, Fla.)

The second quarter was a back-and-forth affair with both squads knocking down shots. The Bucs retained their lead the entire quarter, in fact building it to as much as 10 points following Sarah Thompson’s (Gate City, Va.) first collegiate three. Cornell outscored the Bucs by four in the second quarter (23-19) as both teams combined to shoot 17-of-25 in the quarter, including both squads draining a pair of threes. Roberts dominated the quarter with 11 points, finishing 5-of-7 from the floor.

The Big Red’s Theresa Grace Mbanefo made the first two buckets out of the locker room to give Cornell its only lead of the game, 36-35. Back-to-back buckets by Jakhyia Davis (Knoxville, Tenn.) put ETSU back on top, 40-36, and the Bucs would never look back. ETSU finished the final seven minutes of the quarter on a 10-8 run, taking a 50-44 advantage into the final quarter of action.

Cornell trimmed the Buccaneer lead to four before the Bucs fired off eight unanswered points, including a pair of consecutive threes from Damiah Griffin (Memphis, Tenn.) to push the ETSU advantage to 58-46. The two squads traded eight points apiece in the final eight minutes of play, with Carly Hooks (Atlanta, Ga.) corner three with two minutes remaining proving to be the dagger in the Big Red.

NEXT UP
The Bucs welcome ACC foe Georgia Tech into town on Wednesday, Nov. 17. Tip off against the Yellow Jackets inside Brooks Gym is set for 7 p.m.