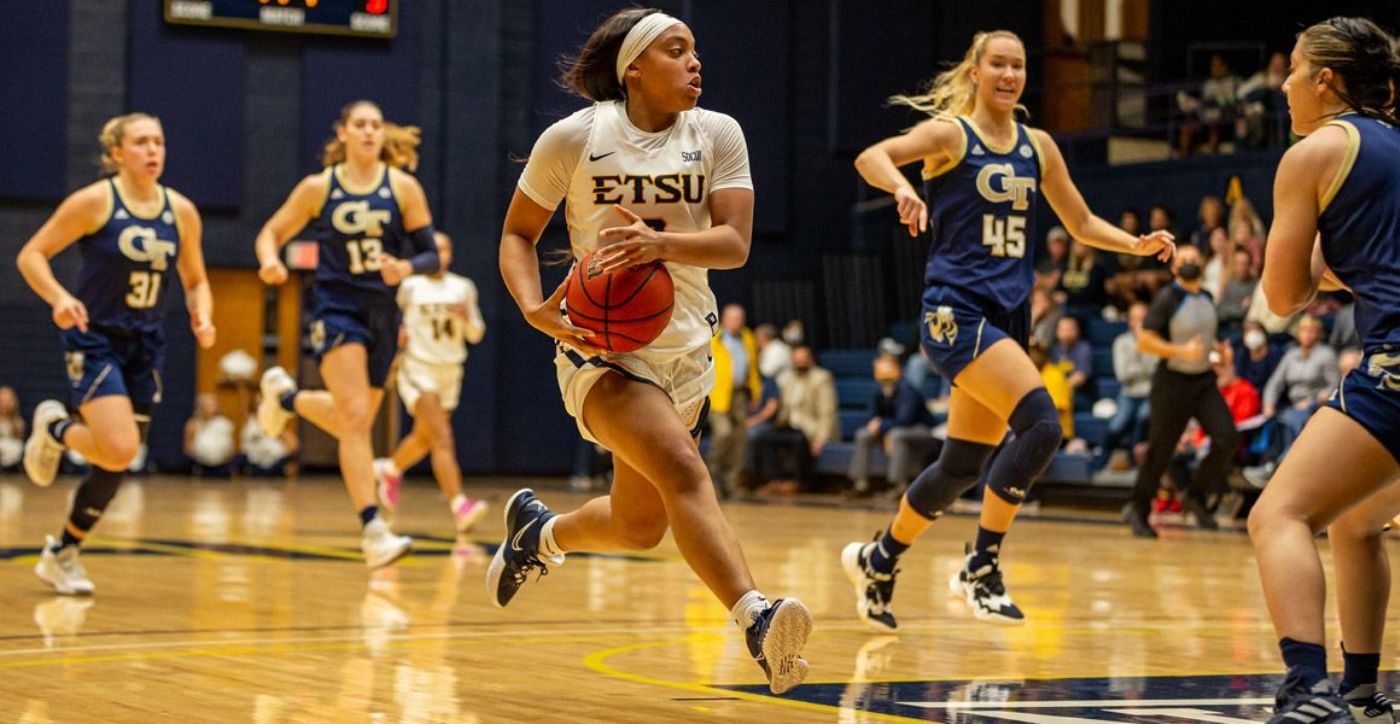 No. 18 Georgia Tech’s strong start too much for ETSU to overcome
Georgia Tech at ETSU | November 17, 2021
Related Links

JOHNSON CITY, Tenn. (Nov. 17, 2021) – The ETSU women’s basketball team hosted one of the top 20 teams in the country on Wednesday night, and after slow opening quarter, the Buccaneers put a scare into No. 18 Georgia Tech late in the third. Unfortunately, the Bucs couldn’t complete the comeback, as the Yellow Jackets pulled away for a 65-42 win inside Brooks Gym.

Georgia Tech scored the first 13 points of the contest and led 28-13 after the first 10 minutes of play. From there, ETSU showed its grit and toughness – holding the Yellow Jackets to eight second-quarter points and eventually inching within 11 points late in the second half – but Georgia Tech’s size took over to hold on for the non-conference victory.

For the foruth time this season, ETSU transfer Jaila Roberts (Pensacola, Fla.) scored in double figures as she led the Bucs with 11 points, while Jakhyia Davis (Knoxville, Tenn.) added nine points and six rebounds off the bench.

Georgia Tech was led by the combo of Lorela Cubaj and Nerea Hermosa as they combined for 29 points and 19 rebounds, while accounting for 10 of the Yellow Jackets’ 21 made field goals. Hermosa posted a double-double as she led all scorers with 17 points and pulled down 10 rebounds and Cubaj – the reigning ACC co-Defensive Player of the Year – recorded 12 points, nine rebounds, five assists and three steals.

After Georgia Tech went 10-of-14 from the field in the first quarter, the Bucs held the visitors from Atlanta to 11-of-42 (26 percent) for the remainder of the night. The Yellow Jackets led by 20 early in the third quarter, but with 1:27 remaining in the frame, Roberts drove the lane and scored on a fast-break lay-up, making it 47-36. Georgia Tech – who called a timeout a few minutes earlier when the Bucs clipped it to 14 – felt the pressure, but the 2021 Sweet 16 participant responded on its next trip down by hitting a three-pointer, stopping the Buccaneer run.

Georgia Tech out-scored ETSU by seven in the final quarter and secured its sixth straight win in the series. With the loss, ETSU moved to 1-3 on the season, while Georgia Tech improved to 4-0.