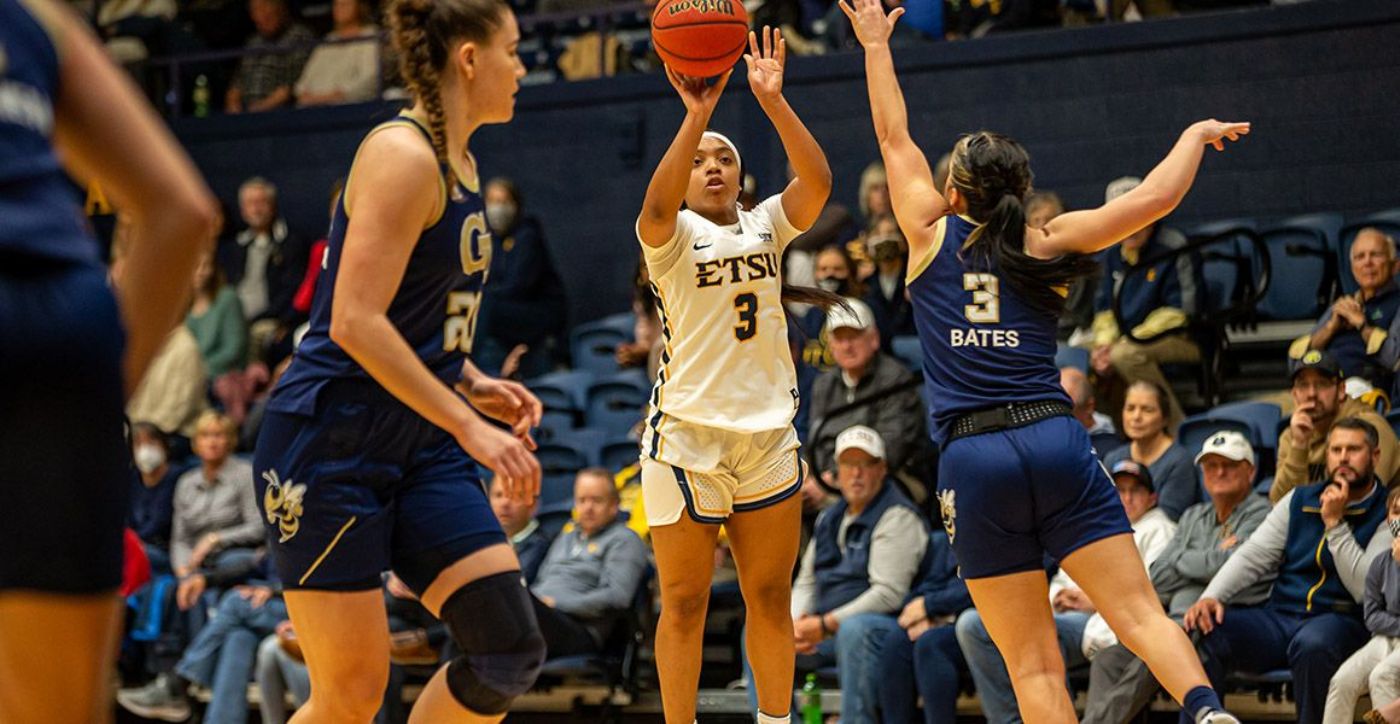 CONWAY, S.C. (Nov. 26, 2021) – In a game that featured six lead changes in the final two minutes, the ETSU women’s basketball team couldn’t close things out as Gardner-Webb scored the final seven points to edge the Buccaneers 78-72 in the opener of the Coastal Carolina Thanksgiving Classic on Friday inside the HTC Center.

STAT OF THE GAME

Jamir Huston (Cleveland, Ohio) made a pair of free throws to put ETSU back on top 67-66 with 2:17 remaining, marking the first of six lead changes down the stretch. Unfortunately, after a Jaila Roberts (Pensacola, Fla.) three-pointer put the Blue and Gold back up one with 56 seconds left, Gardner-Webb closed the game on a 7-0 run to secure its first win of the season. ETSU had two chances to either take the lead or tie the game in the final 40 seconds but came up empty.

The Bucs got a balanced scoring attack with eight players scoring at least two points and Roberts leading the way with 15 points (4-of-5 from beyond the arc), seven rebounds and two assists.

Gardner-Webb’s Lauren Bevis scored a career-high 32 points on 9-of-15 shooting from beyond the arc.

The opening six minutes of the contest was tightly contested, but with the game tied at eight, Gardner-Webb rattled off six straight points and eventually held a 20-16 lead at the end of the first quarter. Amaya Adams (Kansas City, Mo.), making her first start of the season, scored five points on 2-of-3 shooting in the first stanza.

Gardner-Webb took momentum into the second quarter as they scored the first five points and held ETSU scoreless for the first five minutes and 36 seconds, but the Bucs battled back. Huston’s lay-up at the 4:24 mark ignited a run to close the quarter as ETSU scored 13 of the final 20 points, cutting its deficit to three at the break, 32-29.

ETSU, who made its final four shots of the second quarter, extended the streak to seven consecutive makes in the third and used an 8-0 run to go up 37-32 following a Courtney Moore (Gainesville, Fla.) three with 8:25 left in the third quarter.

But another cold stretch set in for the Blue and Gold.

Following a jumper by Kaia Upton (Nashville, Tenn.) at the 5:33 mark, the Runnin’ Bulldogs used an 11-0 run to regain a 49-39 lead, forcing the Bucs to call timeout with three minutes left in the quarter. After trailing by as many as 11, ETSU cut its deficit to eight at the end of the third.

With Gardner-Webb leading by eight at the 8:13 mark, ETSU quickly chipped away at the deficit and scored eight unanswered over the next minute and 29 second seconds, pulling even at 56 following a pair of free throws by Moore. From there, the Bucs were able to tie things back up at 58 and 60, before taking the 67-66 lead on two made free throws by Huston with 2:17 left to play.

Gardner-Webb then went back ahead by one with two freebies before Demi Burdick (Marshall, Ill.) answered with a lay-up at the 1:36 mark. Again, the Runnin’ Bulldogs responded as Lauren Bevis hit her ninth triple of the night, but Roberts followed suit with one of her own, giving ETSU the 72-71 advantage with less than a minute remaining. Gardner-Webb took the lead for good on two free throws with 47 ticks remaining and Upton missed a lay-up with just under 40 seconds to go. After the Runnin’ Bulldogs went 1-of-2 at the line, Roberts couldn’t tie it up when her jumper missed with 23 seconds remaining. The Bucs had to foul down the stretch and Gardner-Webb made four straight free throws to pick up the victory.

ETSU closes out the Thanksgiving tournament by taking on host Coastal Carolina Sunday at 2 p.m.