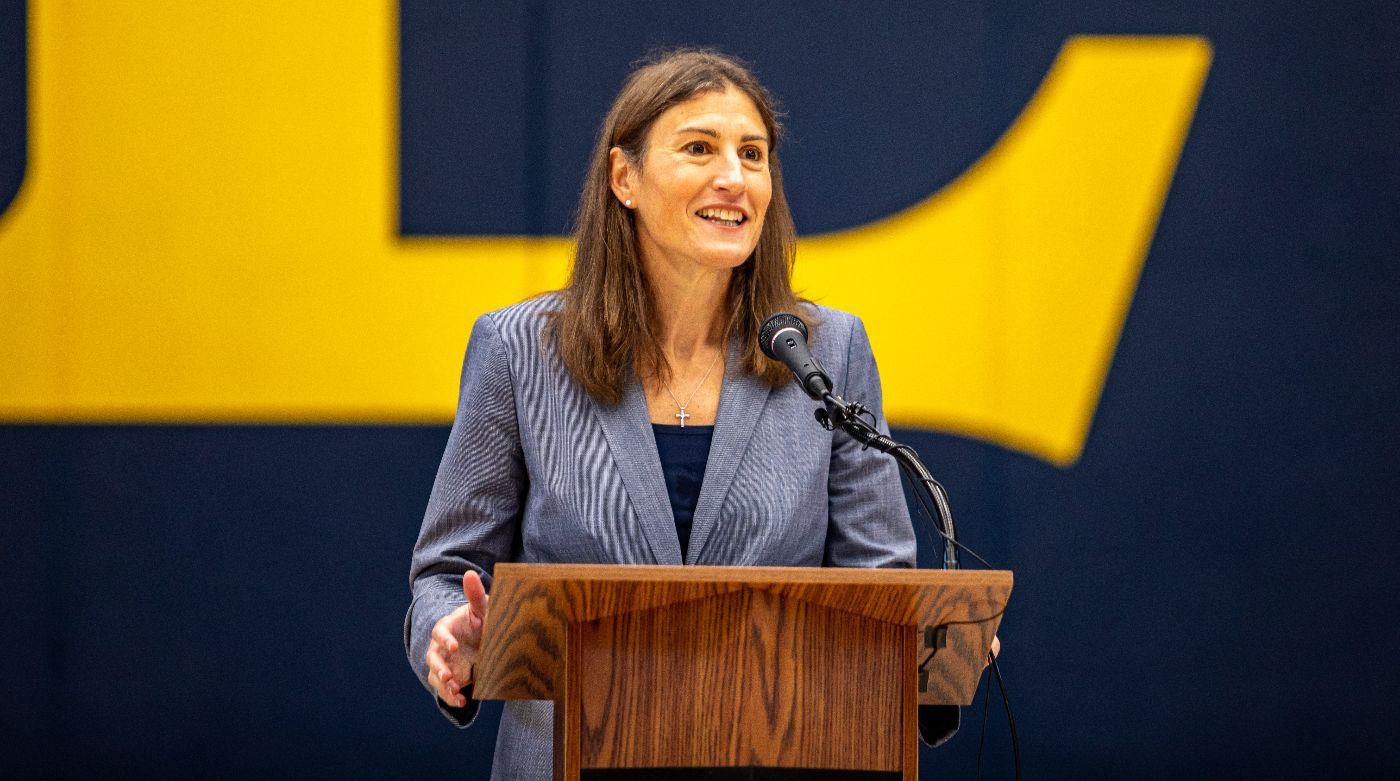 Coach Mock, who is the 10th head coach in program history, was the leader of the UNC Asheville women’s basketball program from 2012-20.

“We are so excited to have Coach Mock lead our program,” said Sander. “She checks all the boxes. Her passion is to make every student-athlete the best they can be, which is right in line with our values. I have no doubt that she is going to turn this program around and get us back to where we belong – competing for and winning SoCon championships.”

"I am beyond excited and honored to be the next head women's basketball coach at East Tennessee State University,” said Coach Mock. “Growing up in this part of the country and coaching just over the mountain at UNC Asheville, I have always admired the commitment to excellence and the enthusiasm surrounding ETSU Athletics. Johnson City is not only a beautiful place, but a community of hard-working people, knitted together around an amazing university and storied athletics program.

“I would like to thank President Dr. Brian Noland, Dr. Richard Sander, and the entire ETSU community for inviting my husband Jeremy and me to join the Buccaneer family. This program will have shared ownership among the staff, student-athletes, and this community, and my intent is to continue to raise the bar as we compete for Southern Conference Championships. We will be relentlessly committed to excellence on and off the court, and work hard to create an environment where our student-athletes and coaches are improving daily and thriving in the process.”

During her eight years in Asheville, Coach Mock led the Bulldogs to four straight postseason appearances from 2015-19, along with claiming back-to-back Big South Tournament titles and the 2015-16 Big South regular season championship. Mock earned Big South Coach of the Year honors following the 2015-16 season where the Bulldogs had the biggest turnaround season in NCAA Division I basketball after UNCA finished with an overall record of 26-7 following a 9-22 campaign the year prior. In addition to the conference coach of the year accolade, Brown was also named Division I women’s basketball Coach of the Year by HERO Sports.

The 2015-16 season was a historic year as UNCA set program records for wins (26) and conference wins (16), while also enjoying its best start to a season after winning nine of its first 10 games. The Bulldogs’ regular season crown also marked the first in program history. Under Coach Mock’s watch that season, Chatori Major won Big South Player of the Year and Conference Tournament MVP honors, while Paige Love was recognized as the first student-athlete to receive the University’s William and Ida Friday Award for Service to Community.

The Bulldogs repeated as Big South Tournament champions in 2016-17 after winning four games in four days – defeating both the No. 1 and No. 2 seeds – en route to becoming first-ever No. 7 seed in Big South Tournament history to win the title, marking UNCA’s second straight NCAA Tournament berth. Coach Mock then directed the Bulldogs to consecutive trips to the Women’s Basketball Invitational (WBI) in 2017-18 and 2018-19.

Overall, Coach Mock led the Bulldogs to five of their 10 winning seasons in school history. In her last five seasons at the helm, Coach Mock saw UNCA total a 95-67 overall record.

Following her time in Asheville, Mock spent the last two years working at Global Sports and Events and was most-recently a consultant at Inkwell Sports Solutions.

Coach Mock began her coaching career as an assistant coach at Georgia Tech from 2002-04. In her first season in Atlanta, the Yellow Jackets won 20 games and earned the program’s second-ever bid to the NCAA Tournament. After the two years at Georgia Tech, Mock spent the 2004-05 season as an assistant at Jacksonville before heading to Charlotte.

Mock played collegiately at Wake Forest where she earned a bachelor’s of arts in history in 2000 and a master’s of education in education in 2001. For her career, Mock – a two-time captain – averaged 7.2 points and 5.1 rebounds. As a senior, Mock earned honorable mention All-ACC honors after posting 10.0 points and 6.2 rebounds per contest. Over her career, Mock did not miss a game as she played in 111 games and made 57 starts. Mock was a four-year member on the ACC Honor Roll and was named first team Academic All-District.

The daughter of Weaver and Brenda Kirkpatrick, she is most often referred to as ‘Coach Mock’ or ‘Mock,’ which is her middle name and also her mother’s maiden name.

Mock graduated from Tuscola High School in 1996 as a decorated student and athlete. While maintaining a 4.2 grade-point average, she lettered in softball and volleyball in addition to her stellar hoops career, where she was an honorable mention All-America selection by Street & Smith and USA Today in 1995 and 1996, while setting two state records for free throws: most in a game (25-of-25) and most consecutive (39), totaling 51 points in the game she hit 25 free throws. Kirkpatrick was the Asheville Citizen-Times Player of the Year for three consecutive seasons. She played for John Best at Tuscola in basketball.

What They Are Saying About Brenda Mock Brown…

Brenda is a proven winner at every level. She’s a tremendous human being and role model. ETSU hit a home run with her level of experience, success and personal integrity. The program will thrive under her leadership.

I couldn’t be any more excited for Brenda and this opportunity. She is one of the finest people and coaches I’ve had the chance work with in my career. Her ability to connect with her players and get their best daily will greatly benefit ETSU. She will thrive at ETSU and in the Johnson City community.

Brenda Mock Kirkpatrick Brown is a tremendous fit for ETSU. Dr. Sander has served his student-athletes well by hiring a proven championship culture builder who truly cares about her players on and off the court!