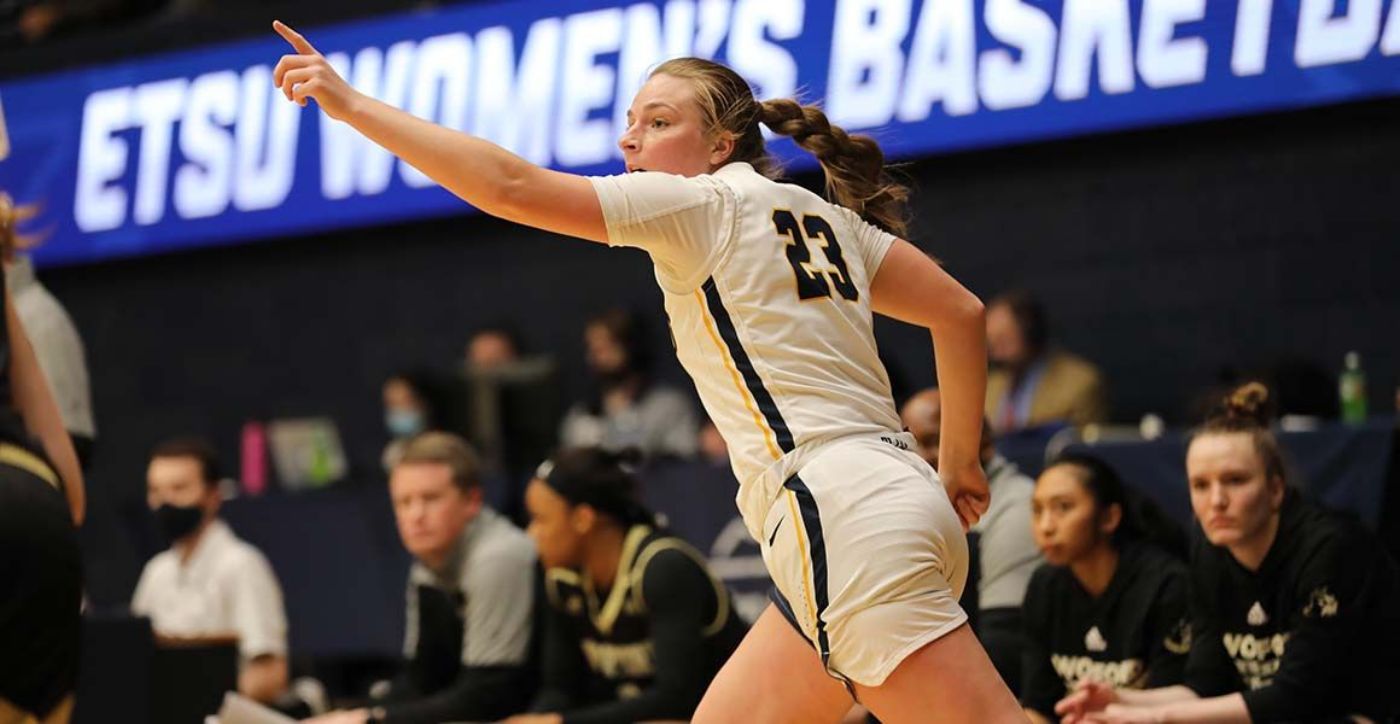 JOHNSON CITY, Tenn. (Sept. 29, 2022) – One day after the season opener announcement, ETSU women’s basketball announced its full non-conference schedule on Thursday. Buc fans will have their first opportunity to watch the team at Brooks Gym for an exhibition against Mars Hill on Thursday, Nov. 3 at 7 p.m.

The Brenda Mock era of ETSU women’s hoops begins with 16 regular season non-conference matchups, seven of which will take place inside Brooks Gym.

“The non-conference schedule is challenging from a competitive perspective and because of the travel it will require,” said Coach Mock. “Our assistant coach, Joe Silvestri, put a lot of hard work into securing these games to prepare us for conference play. In the Southern Conference, we typically have 15 non-conference opportunities, and this creates challenges when you are trying to squeeze those games in between Nov. 7 and Dec. 31."

Mock said one of the team’s most important non-conference trips will be a Thanksgiving tournament on the West Coast, adding more games than usual against high-caliber opponents.

“In this non-conference season, we are participating in an MTE event in Las Vegas which means we have 16 non-conference matchups. I like that our players will have opportunities to compete with highly competitive and successful programs from across the nation. We are excited to get started and are encouraging our fans to mark their calendars to come and support these young ladies on the court this season.”

STARTING AT THE TOP

NORTHEAST BOUND AND DOWN

After the road opener at South Carolina, ETSU will load up and truck to the Northeast region with a pair of road games at St. Bonaventure in Olean, N.Y. on Nov. 11 and at Lafayette in Easton, Pa. on Nov. 13. ETSU has only faced each team once, hosting the Bonnies last season and last playing the Leopards in 1991.

After its lone home exhibition and three road contests to start the season, ETSU will hold its official home opener on Thursday, Nov. 17 against Jacksonville State at 12 p.m. inside Brooks Gym. Three days later on Nov. 20, Morehead State will visit Brooks Gym for a 2 p.m. tip. This marks the return trip for Jacksonville State after defeating the Bucs in Alabama last season, while the Morehead State will be the first meeting since 2014. ETSU won last year’s home opener over Cornell, 66-54.

The Bucs wrap up November with a three-game tournament in Las Vegas on Nov. 25-27. ETSU’s first opponent will be George Washington with opening tip scheduled for Nov. 25 at 4:30 p.m. EST. The other two opponents are yet to be determined. Other tournament teams include UNLV (host), reigning Missouri Valley Conference champion Illinois State, Louisiana Tech, Stetson and UC San Diego.

ETSU fans will get an early Christmas present to begin the December month, as Southeastern Conference foe Vanderbilt pays a visit to Brooks Gym on Thursday, Dec. 1 at 7 p.m. The last time ETSU hosted a Power 5 program was last season with No. 18 Georgia Tech. Vanderbilt is also the last SEC team to visit Brooks Gym, doing so on Dec. 8, 2016. This year’s game will be the 10th all-time meeting between the Bucs and Commodores.

After Vanderbilt, the Bucs will play two more home games against Virginia University of Lynchburg on Dec. 4 and Bowling Green on Dec. 11. The Lynchburg game was scheduled for last year, but was canceled due to COVID issues. The Bucs host Bowling Green this season after a road meeting in Ohio last season. It will be the second all-time meeting.

The Bucs will play three road games in the Carolinas to close the calendar year, beginning Dec. 14 at Charleston Southern. After that, ETSU will play a familiar foe in UNC Asheville on Dec. 17. The following week, the Bucs face Mount St. Mary’s in Cherokee, N.C. on Dec. 22 — the final game before Christmas break.

BACK TO MOCK’S ROOTS

The Dec. 17 matchup at UNC Asheville will be a game circled on many calendars as former Bulldogs head coach Brenda Mock returns to Kimmel Arena for the first time since taking over the Bucs this offseason. Mock led the UNC Asheville program from 2012-20 and was named the NCAA Division I women’s basketball Coach of the Year by HERO Sports in 2015-16 after guiding Asheville to a 26-7 record and a 17-win turnaround.

ETSU will host two games at Brooks Gym toward the end of December with games against Longwood on Dec. 20 at 7 p.m. and Converse College on New Year’s Eve at 2 p.m. The 2023 portion of the schedule includes only conference games, starting Jan. 5 at 7 p.m. against Chattanooga. The first three conference games will be inside Brooks Gym.

Fans can purchase their season tickets by calling the ETSU Ticket Office at 423-439-3878 or by visiting ETSUTickets.com.