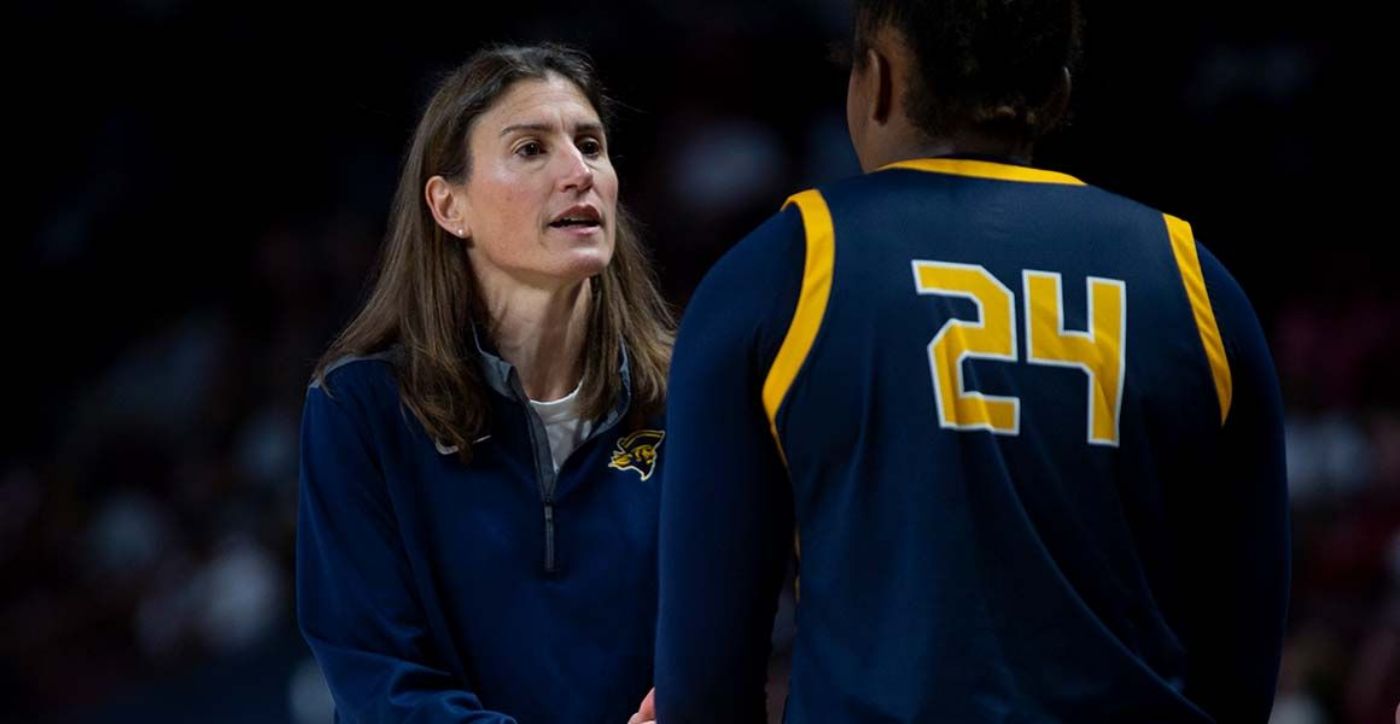 OLEAN, N.Y. (Nov. 11, 2022) – ETSU collected the first win of the Brenda Mock Brown Era on Friday in New York, as the Buccaneer women’s basketball team took a second quarter lead and never looked back in a 66-58 road win over St. Bonaventure.

Coach Mock, who took over as ETSU’s head coach in August, netted her first win with the Bucs and No. 118 overall as a head coach. Mock previously spent eight seasons at UNC Asheville from 2012-2020.

The Bucs (1-1) took a 19-18 lead with 3:10 to go in the second quarter on a layup by graduate transfer Jayla Ruffus-Milner (North Hills, Calif.) during a 13-0 run, taking the lead for good. The Bucs led by as many as 17 in the third quarter and fought off a late rally by St. Bonaventure (0-2) to ice the game and notch their first win.

Graduate transfer Jiselle Thomas (Norwalk, Ohio) led the team in scoring for a third straight game, taking over with 32 of the team’s 66 points. The former Temple and Florida International star went 11-19 from the floor, 2-4 from behind the arc and 8-10 from the line, including seven free throws in the final 1:05.

St. Bonaventure was led by Maddie Dziezgowski with 18 points, many of which came in the Bonnies’ late rally attempt.

First Quarter: Though both teams shot 5-11 from the floor for 45.5 percent, it would be the Bonnies who took the early 13-11 lead in the first quarter. The advantage came from a 3-6 showing behind the arc. Making her ETSU debut off the bench, Brown led the quarter with six points.

Second Quarter: The Bucs took the lead in the second quarter with a 15-7 scoring advantage, including a 13-2 run in the final seven minutes of the half. The Bucs shot 40 percent (6-15) while holding the Bonnies to just 27.3 percent from the floor (3-11). Thomas began to heat up in the second quarter and had a pair of triples in ETSU’s late surge.

Third Quarter: Not much changed for ETSU out of the break, as the Bucs outscored the Bonnies 21-12 and dominated the floor with 9-14 shooting versus a 3-13 showing at the other end. ETSU’s largest lead also came in this period at 47-30 on a triple by Kendall Folley (Lebanon, Ohio) with under 30 seconds to go.

Fourth Quarter: The Bonnies mounted a fourth quarter comeback, cutting the deficit to 10 midway through the fourth quarter on a three by Maddie Dziezgowski. The Bonnies’ leading scorer cut it to single digits with 3:11 remaining on an and-one opportunity, which put the pressure on late and sparked a 7-0 run to make it 55-48. It would be Neveah Brown exactly one minute later hitting a three-point shot to end the run and swing momentum back to the Bucs. The Bonnies continued hanging around, but ETSU iced the game with seven late free throws from Thomas.

The Bucs wrap up its trip in the Northeast with a short bus trip over to Easton, Pa. to take on Lafayette. Tip-off is set for Sunday, Nov. 13 at noon.