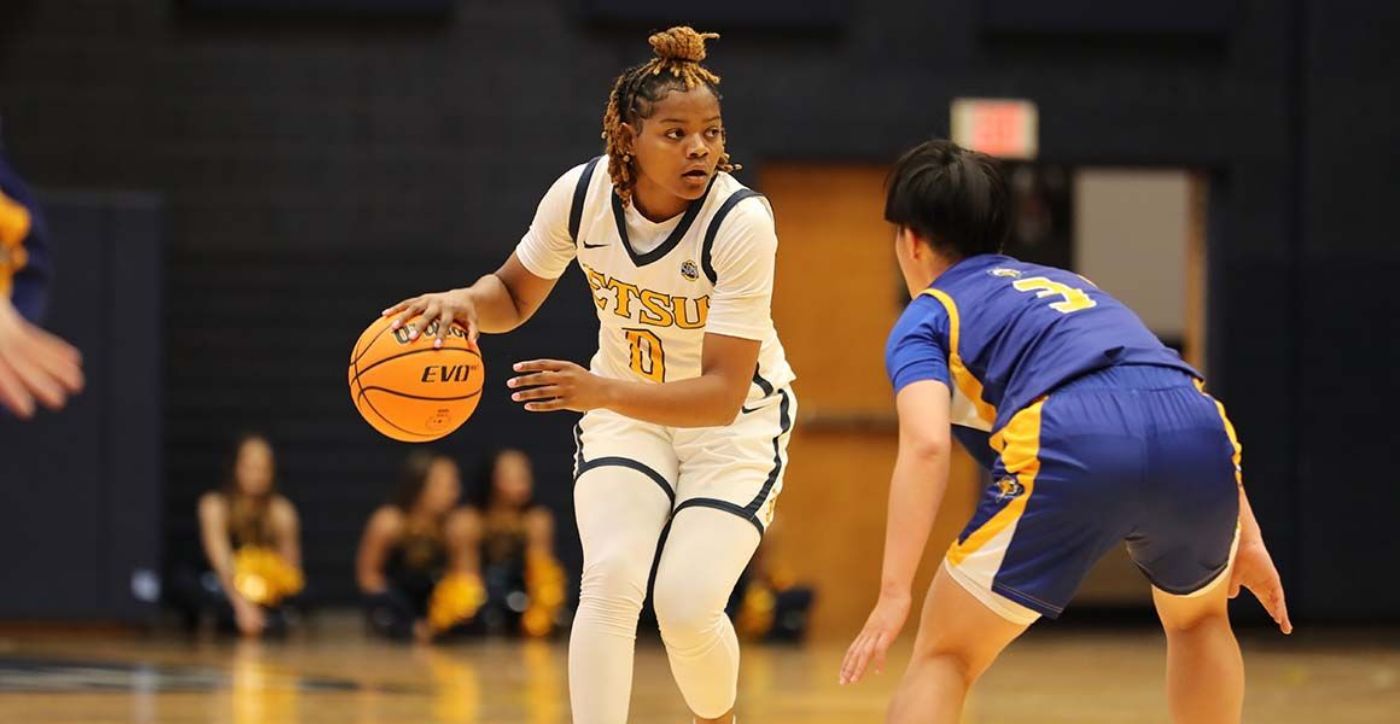 LAS VEGAS, Nev. (Nov. 26, 2022) – A tenacious defensive effort down the stretch made all the difference in a 48-44 win for ETSU women’s basketball on Saturday, defeating UAlbany on the second day of the UNLV Thanksgiving MTE hosted inside Cox Pavilion in Las Vegas.

With the win, ETSU improves to a 5-2 overall record and advances to the consolation bracket championship of the prestigious tournament tomorrow at 2:15 p.m. ET (11:15 a.m. local time). The Bucs will face the winner of Stetson and UC San Diego.

Graduate guard Jiselle Thomas (Norwalk, Ohio) made a go-ahead bucket with 5:31 remaining in the game, putting ETSU ahead 44-42. From there, the Buccaneer defense put the clamps on and did not allow UAlbany (3-3) to score for over five minutes. Ahead 45-44 with under 30 seconds to go, ETSU iced the game with free throws to secure the win.

UAlbany was paced by Ellen Hahne with 14 points.

First Quarter: Statistically, both sides were fairly even in the first frame, but ETSU ended the quarter on a 5-0 run to take a one-point advantage. The Bucs had five steals and turned those into five points off turnovers.

Second Quarter: After assisting on the last two baskets of the first quarter, Brown took a shot of her own and sank it behind the arc, pushing the lead to 16-12 within the first minute. Moments later, fellow sophomore Sarah Thompson (Gate City, Va.) nailed a second-chance three-pointer off a rebound from McDaniel and forced the Great Danes into a timeout. The Bucs led the entire quarter but never led by more than nine points.

Third Quarter: Five points in the first minute of the second half pulled the Great Danes back even with ETSU, then the teams proceeded to swap the lead a few times. At one point in the quarter, both sides were shooting 8-10 from the charity stripe and 5-12 from the field for the game with the difference coming on one two-point basket by ETSU. UAlbany outscored the Bucs 12-9 to pull within two heading into the final 10:00.

Fourth Quarter: The drama spilt over into the final frame, as the two sides were tied at 42-42 with 5:51 remaining. Thomas scored a go-ahead layup with 5:31 to go to make it 44-42 — a score that held for over four minutes. Brown later stole one away with 1:37 remaining and made a free throw at the other end to tack on another point. With 35 seconds to go, UAlbany had the ball and called a timeout behind by three, trying to set up something at the other end. A layup by Hahne brought the Great Danes within one, but free throws by Brown and Folley put the game on ice.

The Bucs move on to the consolation bracket championship (fifth-place game) with a meeting against the winner of Stetson and UC San Diego. Tip-off is set for 2:15 p.m. inside Cox Pavilion and will mark the second game of the final day.