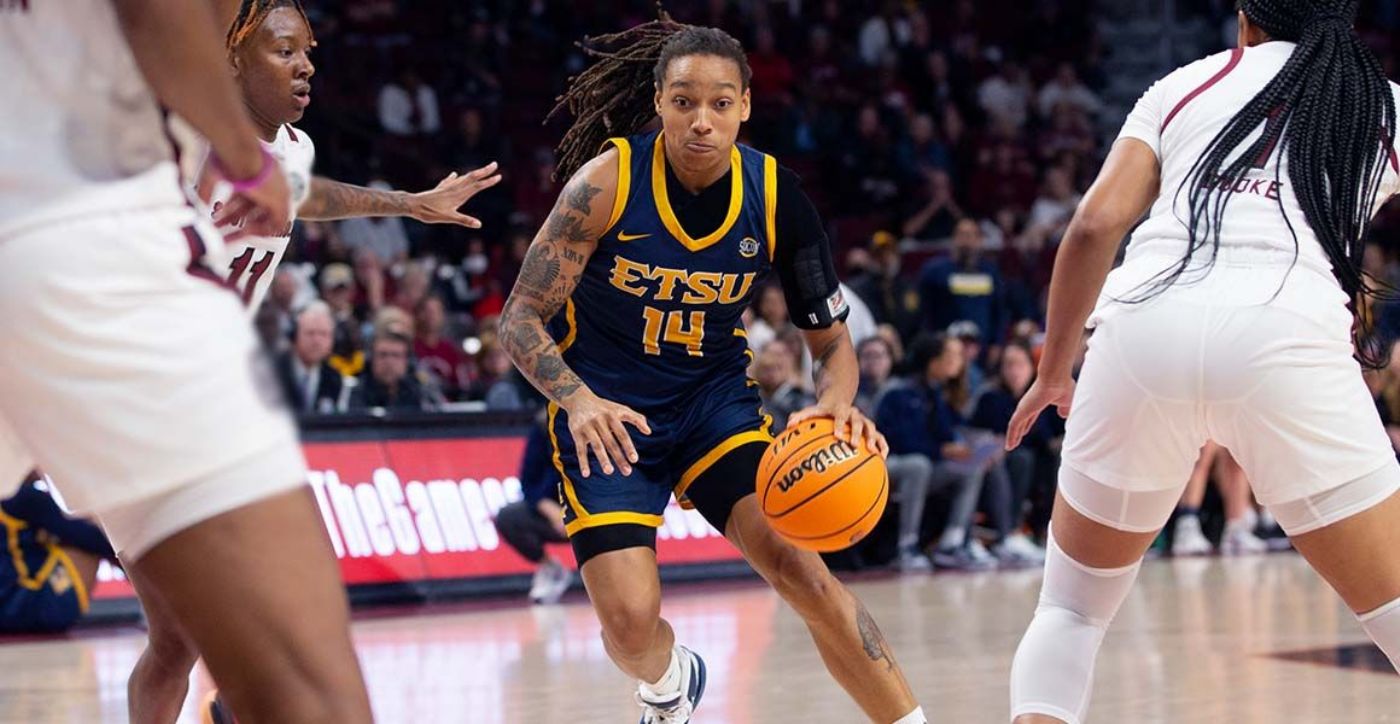 LAS VEGAS, Nev. (Nov. 27, 2022) – Playing amongst noteworthy Group of Five and mid-major programs this weekend, ETSU women’s basketball left its mark by winning the consolation bracket of the UNLV Thanksgiving MTE in Las Vegas on Sunday with a 55-46 win over UC San Diego in Cox Paviliion.

What happened in Vegas will stay in the history books, as the Bucs are off to their best eight-game start since the 1996-97 season with a 6-2 overall record. The Bucs finish the MTE with a 2-1 record, winning the final two games of the tournament. UC San Diego drops to 2-4 overall and a 1-2 record for the tournament.

Much like yesterday’s win over UAlbany, the ETSU defense clamped down and held its opponent to under 50 points for the fourth time in eight games this season. Most of UCSD’s scoring came in the final frame, as ETSU hung on to the lead despite it dwindling from 18 points to single digits by the final buzzer.

ETSU’s scoring was balanced between seven players, led by sophomore Courtney Moore (Gainesville, Fla.) with 11 points. Moore scored a two-pointer early in the first quarter, but went quiet until the final frame. Looking to keep her team in the lead, Moore heated up and nailed three triples for nine of ETSU’s 14 fourth quarter points.

First Quarter: The game started fairly even, with UCSD taking a 10-8 lead with 2:53 remaining in the opening quarter. On the ensuing possession, Thomas nailed a three-pointer that would give ETSU a one-point lead and spark a 15-0 run that bled into the second quarter. The Bucs were hindered by a 1-9 showing behind the arc in the first quarter, but made up for that with no offensive turnovers and seven made buckets from the floor.

Second Quarter: ETSU’s second quarter run grew the lead from 15-10 to 31-13 in a matter of six and a half minutes with Brown and Ruffus-Milner each reaching double-digit scoring totals in that span. The Bucs were once again dry from behind the arc, but went back to the well and did most of its scoring in the paint. The 33 first half points were the second most this season behind the 36 against Lafayette.

Third Quarter: The Tritons were able to cut into the deficit a bit in the third frame, starting the second half on a 6-0 run to make it 33-27 near the midway point of the third quarter. Folley ended their run with a personal 5-0 run of her own, making a layup and a three-pointer on back-to-back possessions for her first points. McDaniel joined the scoring fun with a triple to end the frame, pushing the lead back to double-digits at 41-31.

Fourth Quarter: UCSD made a final stand in the fourth quarter, but “The Courtney Moore Show” canceled their efforts as the ETSU sophomore fired off three successful triples en route to victory. The Tritons scored a pair of quick baskets in the final minute, but the deficit was too much to overcome.

After completing the longest road trip of the season, ETSU will head back to Johnson City to host Power 5 opponent Vanderbilt inside Brooks Gym. Tip-off is set for Thursday, Dec. 1 at 7 p.m. The game will serve as Heroes Day. More information on this promotion will be published this week on ETSUBucs.com.