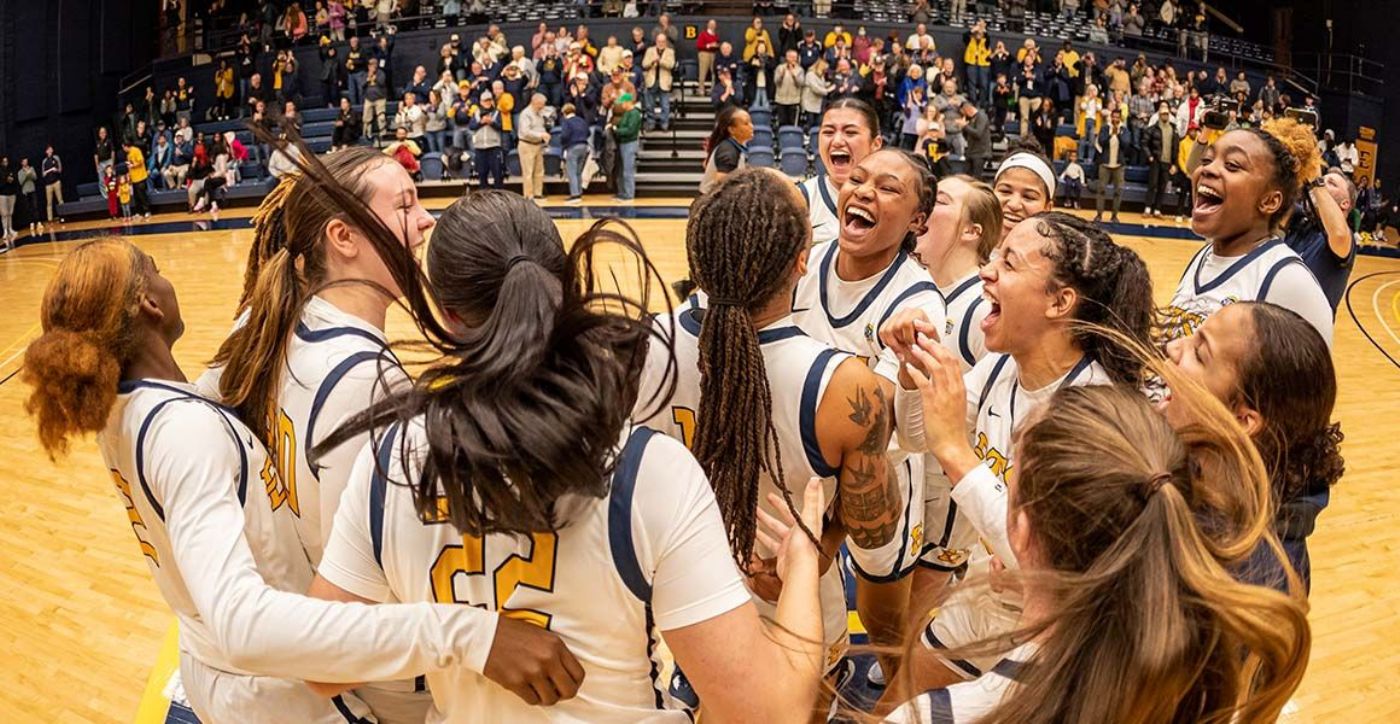 JOHNSON CITY, Tenn. (Dec. 1, 2022) – It was a Thursday night to remember inside Brooks Gym, as ETSU women’s basketball made history with a gritty 44-31 win over Vanderbilt in front of over 700 fans in Johnson City.

The win marks ETSU’s first victory over an SEC opponent since beating Kentucky on December 12, 2008. It was also ETSU’s first Power 5 home win since defeating Wake Forest on December 5, 2019 and the first win over Vanderbilt in 41 years.

Furthermore, the Bucs are off to their best nine-game start since the 1994-95 season with a 7-2 record. Those seasons are tied for the best start in program history since women’s basketball became an NCAA sport in 1982.

Much like many of the games this season, strong defense was the key factor for the Bucs on Thursday. ETSU forced Vanderbilt (6-4) into its style of play and held the Commodores to just 22.9 percent shooting from the floor (11-48) and 15.4 percent shooting behind the arc (2-13).

That defense made for some great history, as ETSU became just the third mid-major women’s basketball team to hold an SEC team to under 35 points since the 2009-2010 season. The other teams to accomplish this was Princeton in 2019 and Wisconsin-Green Bay in 2012 — both against Missouri.

Despite also shooting a low percentage, ETSU showed its grit and toughness with a 47-38 rebounding advantage and a 22-12 advantage on the offensive boards. ETSU also forced Vandy into 17 turnovers and dominated the paint with a 22-14 scoring advantage.

On the defensive end, graduate post Jayla Ruffus-Milner (North Hills, Calif.) was the star with three blocks and two steals to go with six points and eight rebounds. A surprising leader emerged on the boards on Thursday, as point guard Kendall Folley (Lebanon, Ohio) finished with 12 rebounds in 34 minutes of action.

As a result of ETSU’s defensive-minded approach, tonight’s score broke the school record for fewest combined points in a game with 75. The previous record was 85 set in a 56-29 win over Mercer in 2006.

Tonight, Vanderbilt mustered just five first quarter points and 14 halftime points — both the lowest scoring totals by an ETSU opponent this season. The 31 points was just shy of breaking the single-game record for fewest points by an opponent, also set in 2006 by Mercer with 29. Vanderbilt escaped the history books with a basket with 2:14 remaining.

First Quarter: ETSU jumped out to an 11-5 lead with staggering defense, using a 9-0 run over the last six minutes of the first frame. The final bucket of the quarter came on a coast-to-coast rebound and lay-up from Thomas. After that run, ETSU never trailed again despite a tied score in the second half.

Second Quarter: The defensive struggle continued into the second quarter, as Vanderbilt managed a pair of threes and three free throws against the Bucs. Meanwhile, sophomore Courtney Moore (Gainesville, Fla.) extended the lead and the run with an early triple to begin the frame. Vanderbilt pulled back within five at 15-10, but Thomas found twine with a three-pointer of her own to re-extend the lead.

Third Quarter: Coming out of the locker room, a determined and refocused Vandy squad went on a 6-0 run to tie the game back up at 20-20. ETSU’s Jiselle Thomas and Vandy’s Marnelle Garraud traded baskets to keep it tied for the moment, but then the Bucs caught fire with an 8-0 run. The run started with Knoxville native Jakhyia Davis making two free throws after an offensive rebound and ended with baskets from Nevaeh Brown and Jiselle Thomas.

Fourth Quarter: Defense continued being the difference for ETSU, as Vanderbilt shot just 16.7 percent in the final frame on 2-12 shooting. Meanwhile, ETSU did enough on the offensive side to take a double-digit lead by the game’s end. Near the final minute, Nevaeh Brown sank two free throws to make it an 11-point lead at 42-31. The final straw came on the ensuing possession as Courtney Moore had a steal-and-score with under a minute to go and put things out of reach.

Tonight, this team has discovered its identity.

The Bucs look to keep the momentum rolling this weekend with another home game, welcoming Virginia University of Lynchburg on Sunday, Dec. 4 at 2 p.m. inside Brooks Gym.