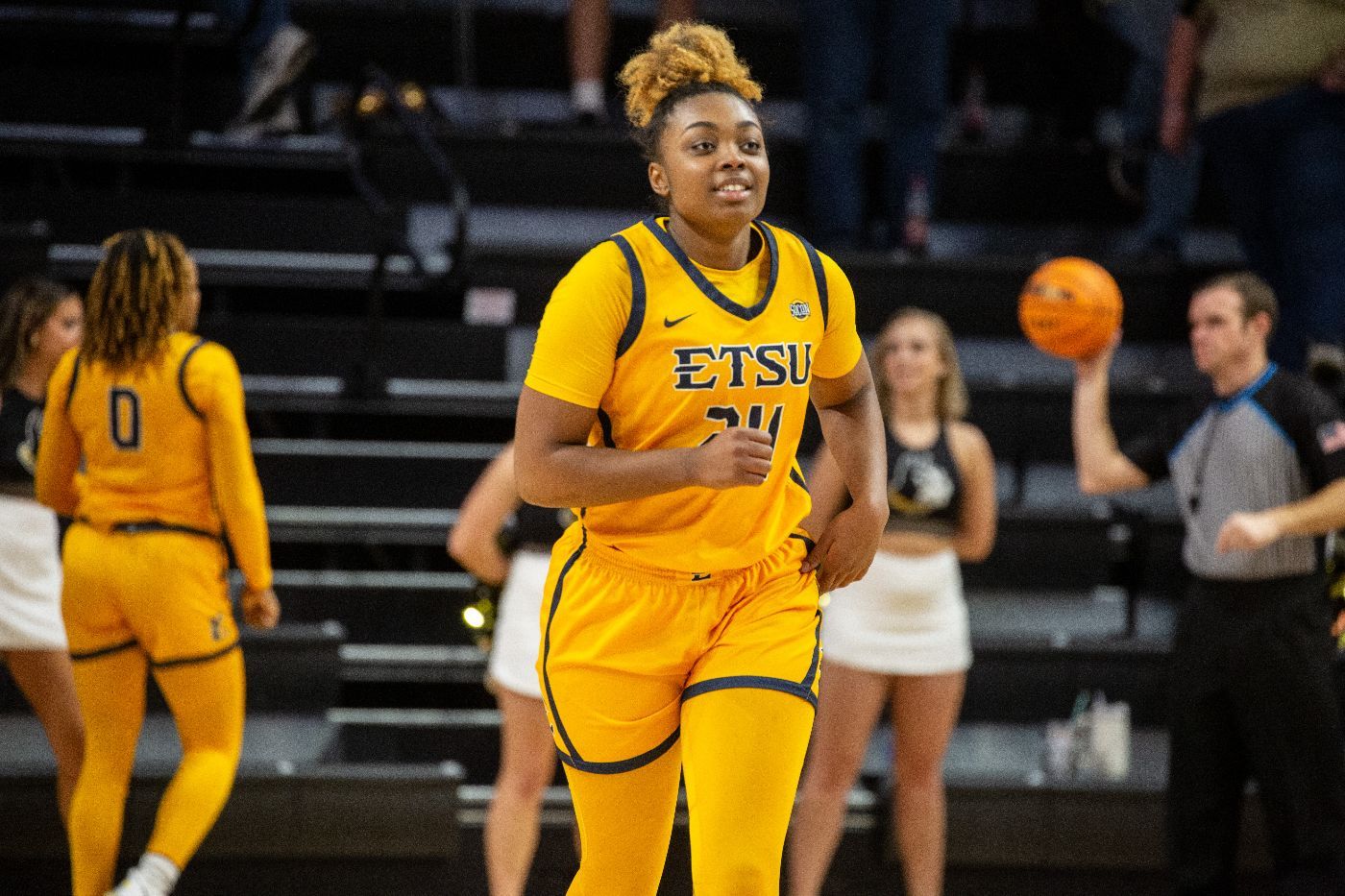 SPARTANBURG, S.C. (Jan. 21, 2023) – A dominant third quarter made all the difference for ETSU women’s basketball in Spartanburg on Saturday, as the Bucs cruised to a 75-58 victory over the Wofford Terriers inside Jerry Richardson Indoor Stadium.

Down one near the halftime break, ETSU’s Nevaeh Brown (Charlotte, N.C.) gave the Blue and Gold a boost in momentum with a buzzer-beating layup to put her team up 32-31 at halftime. The flood gates opened from there, as ETSU outscored Wofford 26-8 in the third quarter and never trailed again.

The Bucs finish a successful road trip to South Carolina with back-to-back Southern Conference wins over Furman and Wofford, moving to 2-3 in SoCon play and 15-6 overall.  Meanwhile, the Terriers fall to 13-6 overall and 3-2 in league play.

ETSU is the first team this season to defeat Wofford at home. The Terriers were previously 8-0 on their own court. Additionally, today marks ETSU’s first road win over Wofford in almost exactly five years (January 20, 2018).

Scoring her 500th career point in an ETSU uniform today, Jakhyia Davis (Knoxville, Tenn.) finished with 10 points and 12 rebounds for her first double-double of the season. Her previous season-high in rebounds was nine against Jacksonville State.

First Quarter: The Bucs got off to a hot start, jumping ahead to an 8-0 run with four points and four rebounds by Jakhyia Davis in the first two minutes of action. On the other end, ETSU’s defense did not allow a score for nearly four minutes to open the contest. Right at the 1:00 mark of the quarter, Wofford took its first lead of the game at 11-10 on a go-ahead three-pointer. Davis had seven rebounds by the quarter’s end.

Second Quarter: Both teams picked up the scoring in the second quarter, as the Bucs finished 60 percent from the floor in the frame with 9-15 shooting from the floor, including 2-4 behind the arc. This resulted in 22 points for ETSU, surging ahead at the halftime buzzer thanks to a quick layup by Nevaeh Brown (Charlotte, N.C.) to turn a one-point deficit into a one-point lead. The lead changed six times in the half.

Third Quarter: ETSU had its most dominant quarter since conference play started this month, outscoring Wofford 26-8 in the third frame to take a 19-point lead. The Bucs went 11-16 from the floor for 68.8 percent while limiting the Terriers to just 4-18 shooting at 22.2 percent. Courtney Moore got hot with three triples, while Journee McDaniel (New Bern, N.C.) added one for a 4-6 shooting effort behind the arc.

Fourth Quarter: Wofford kept pace in the fourth quarter, but it was too little, too late with ETSU taking a 22-point lead with 8:35 remaining. Folley and Thomas each had five points in the frame to finish with nine second-half points.

ETSU returns to Johnson City for two more home games next week, starting in Brooks Gym with a date against Western Carolina on Thursday, Jan. 26 at 7 p.m.

Two days after that, ETSU will host another double header in Freedom Hall as UNCG comes to town for a 1 p.m. tip.