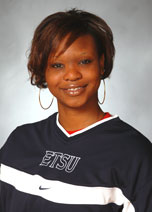 2006-07 Season: Played in 10 contests for the Lady Bucs during her rookie season … saw nine minutes of action against Campbell, collecting one rebound and one steal on Feb. 10 ... scored two points in four minutes against Gardner-Webb 2/8 ... scored first collegiate points vs. UNF on Jan. 18 ... played a season-high 10 minutes against the Ospreys ... played in her first collegiate game against Lipscomb on Jan. 4 ... was sidelined most of the season with an ankle injury ... suited up for the first time this season at SEMO on Dec. 15, but did not see any action.

At Coffee High School: Led her team in rebounding three straight seasons … received the Top 50 Female Athletes in the State of Georgia Award … attended Coffee High School where she was coached by Charles McNeil.