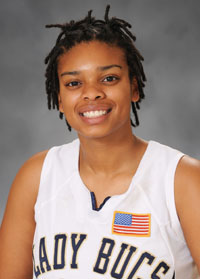 Prior to ETSU
Four-year letterwinner at Stonewall Jackson High … the all-around guard/forward averaged 16.8 points, 8.4 rebounds, 5.2 assists, and 3.8 steals during the 2006-07 season for the Raiders … accumulated a plethora of awards during her high school playing days, as she was named 2007 Cedar Run Player of the Year, First Team All-District, 2007 All-Washington Post First Team, and Regional Player of the Year.