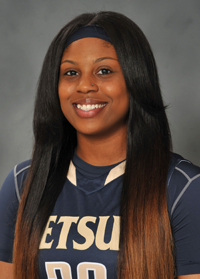 2012-13 Season: Played 11 minutes off the bench in the season opener at High Point (11/10), scoring two points (1-2 FG), grabbing one board and recording one assist... scored seven points and attacked the glass for a season-high seven rebounds at Chattanooga (11/17) ... just missed a double-double in the win at Morehead State on Dec. 2 ... finished with 10 points and tied a career high with nine rebounds against the Eagles ... recorded a career-high three steals against Appalachian State (12/18) ... scored 15 points, pulled down five rebounds, blocked three shots and had one steal off the bench at USC Upstate (1/2) ... scored nine points and pulled own five rebounds in her second start of the season at Lipscomb (1/5) ... added seven points against Stetson (1/14) ... posted 10 points and nine rebounds at Kennesaw State (1/19) ... stuffed the stat sheet with eight points, five rebounds, two assists, two blocks, and two steals at Mercer (1/21) ... totaled eight points and three rebounds vs. Lipscomb (2/2) ... came off the bench to score 12 points and grab seven rebounds at FGCU (2/11) ... added a career-high 17 points, including eight rebounds, at Jacksonville (2/23) ... recorded 11 points at North Florida (2/25) ... registered 11 points and five rebounds in an Atlantic Sun Championship quarterfinal loss to Stetson (3/6).

High School: A 5-foot-10 guard/forward … hails from Northeast High School where she lettered in both basketball and cross country for the Raiders … for her career, Bond not only broke three school records, but she also averaged a double-double as she posted an impressive 21 points and 10 rebounds in four years of play … Bond, the Raiders’ all-time leading scorer with 1,925 career points, also set school records for three-pointers made in a game (7) and most points scored as a freshman in a single game (27) …  averaged 22 points, 12 rebounds and seven blocks during her senior season en route to being named Player of the Year in her region, while also guiding the Raiders to the regional championship in both her sophomore and senior seasons … ranked 10th out of 153 students in her graduating class.