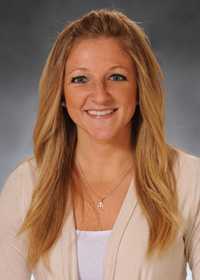 Brooke Wilhoit enters her second as assistant coach and works work with the guards, while also assisting in recruiting, video, community service, academics, and travel.

As for Wilhoit, she is honored to wear the Blue and Gold again.

“I couldn’t be more excited to be back,” Wilhoit said. “Coach Kemp gave me the opportunity to be in Blue and Gold again and I couldn’t turn down the offer. I absolutely loved playing here and spent four years of my life in Johnson City, so it feels good to be back. It’s in my heart that I am a Lady Buc. The last four years were great for me to grow as coach, but this is the place I am supposed to be.”

During her playing career with the Lady Bucs, the Sevierville, Tenn. native earned many accolades, while also laying the foundation to the winning success achieved over the last few seasons. Wilhoit was named to the Southern Conference All-Freshman Team (2003-04), and was also tabbed to the Second Team All-Atlantic Sun and A-Sun All-Tournament Teams in 2007. Furthermore, Wilhoit also finished the 2006-07 campaign averaging an astonishing 5.9 assists per game, placing her 12th among NCAA Division I leaders. For her career, the flashy point guard ranked second in program history with 445 assists and fourth in steals (210). Wilhoit also led the Blue and Gold to the 2007 Postseason WNIT, a first for the Lady Bucs since Kemp took over the program in 1994-95.

“As a player, you couldn’t ask for someone who was as loyal, dedicated, and knowledgeable than Brooke,” added Kemp. “Those traits are critical when it comes to recruiting, and I think Brooke will play an integral role in this area since she played here and she knows our style. During her career at ETSU, Brooke acted as a coach each day in practice and on game day. Brooke was willing to do whatever you asked her to do and she has a heart of a champion.”

Following her playing career in Johnson City, Wilhoit entered the coaching ranks at Wofford. In her three years with the Terriers, Brooke was able to gain a lot of experience in every facet of coaching. Along with coaching the guards, Wilhoit acted as the recruiting coordinator, while also assisting in film breakdown, travel, camps, and community service work. Wilhoit had the privilege in coaching Mahagony Williams – who captured the program’s first-ever Freshman of the Year honor in 2007-08. Along with Williams, Wilhoit saw Liz Miller set the single game, season, and career marks in steals. Miller also dished out 107 assists in 2007-08 – placing her sixth all-time on the single-season leaders list as well as finishing her career 12th all-time in scoring (977).

As a team, Wofford scored 1,890 (2007-08) and 1,810 (2008-09) points, ranking eighth and tenth, respectively. During her three-year stint in Spartanburg, Wilhoit saw the Terriers finish in the top-10 in three-pointers made (all three seasons), while Wofford forced a total of 628 steals in her first two seasons.

Like she did at Wofford, Wilhoit was given the opportunity to get her feet wet in all aspects at Kennesaw State. Wilhoit helped coach the guards, but she also assisted in film exchange, setting up camps, and was the community service liaison.

On the hardwood, Wilhoit coached guard Angie Smith – who led the team in scoring (13.3), assists (93), and steals (84) – while also seeing guard/forward Sametria Gideon average a double-double (11.9 points/10.4 rebounds). In addition to the pair of standouts, junior guard Ashley Holliday enjoyed a historic night when she netted a school-record and NCAA Division I season-best nine three-pointers in the win over Mercer on Jan. 26, 2011. Wilhoit and the Lady Owls also handed Florida Gulf Coast one of its four losses on the year after Kennesaw State knocked off the Eagles, 63-52, in Kennesaw, Ga.

“Having Brooke spend last year coaching at Kennesaw will pay dividends as she is already familiar with the league,” said Kemp.