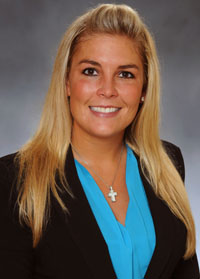 Brittany Burkhardt joined the ETSU women's basketball coaching staff in May 2013 after spending two seasons at the University of Detroit Mercy. Burkhardt joined the Titans in the summer of 2011 as a graduate manager and served as a graduate assistant coach for the 2012-13 campaign. In that role, Burkhardt assisted the program in on the court preparation, film exchange, game management and day-to-day office responsibilities.

Previously as a student-athlete, Burkhardt was a four-year starter and 1,000-point scorer for the Saginaw Valley State Cardinals. She received numerous accolades during her career including a selection to GLIAC All-Academic team, Dean’s List, and preseason All-Conference. She also served as team captain her senior year finishing her playing career with 1,031 points and 606 rebounds. She scored in double digits in three of her four years, including leading SVSU in scoring as a junior at 11.7 ppg.

Off the court, she served on SAAC for three years, where she was a board member of Priority Registration committee, Cards Who Care (Covenant Hospital Volunteer), Special Olympics volunteer and Sunrise Retirement volunteer. She also took part in fundraisers for the Make A Wish Foundation, food drive for Hidden Harvest and community youth days.

Besides basketball, she worked as an intern with ESPN 100.9 FM Radio in marketing, promotions, production and media relations as well as with Total Performance Training Center in Wixom and was a summer camp counselor at Walled Lake Central High School.

She played her high school ball at Walled Lake Central and was a three-time WLAA All-Conference team honoree. She was the WLAA’s scoring leader in her last two seasons and was named team captain and MVP her final three years. She also played softball and left as the school record holder in strikeouts, innings pitched, ERA and shutouts.