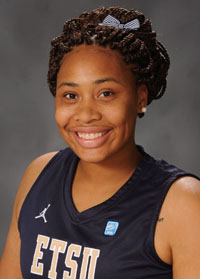 2011-12 Season: Sat out the spring semester due to NCAA transfer rules and will sit out the 2012 fall semester … will be eligible to suit up in the Blue and Gold once fall semester grades are turned in.

2010-11 Season (Charlotte): Came off the bench in 20 games ... scored the 49ers final four points of the first half of the Savannah State game ... logged her first career double-figure minutes game with 11 minutes at North Carolina A&T, she scored a season-high six points while grabbing four rebounds and recording her first career blocked shot in the game.

High School: Coming out of high school – where she attended Mitchell County – Burley was ranked as the 40th best player in the region according to the Southeastern Hoops Report. As a senior, Burley averaged 20 points, 18 rebounds, and five blocks, while earning honorable-mention McDonald’s All-American honors. Burley, who already had her high school number retired, was named first team All-Region 1 AA honors, along with being tabbed MVP of the 2010 Deep South High School Basketball Classic. During her junior season, Burley posted 13 points, 11 rebounds, and five blocks en route to being named first-team All-Region after guiding Mitchell County to a runner-up finish in the Region I-AA.