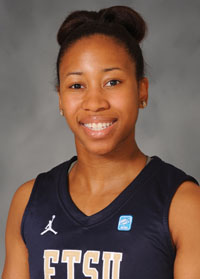 High School: A 5-8 point guard from Orlando … was ranked as the seventh prospect in the state by Florida Insider, and is ranked as one of the top 250 players by Jumpoffplus.com … scored a career-high 43 points her sophomore season, and is the first player in Central Florida Prep’s history to commit to a D-I program … was the starting point guard for her club team in 2009 – where she led them to a Top 10 regional ranking … also made the All-Star game at the University of Florida Camp in 2009 … chose ETSU over Western Carolina, Florida International, Marshall and UNC-Greensboro.