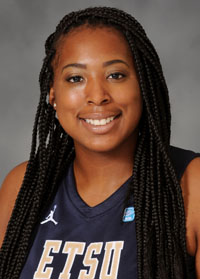 High School: A 6-1 power forward from Bishop McNamara …consistently increased her totals in her first three years with the Mustangs, as she went from 6.3 points/8.6 rebounds per game her freshman year to posting a double-double as a junior – 10.3 points and 11.9 rebounds per contest … was named First Team All-Freshman, while also being a three-time Honorable Mention selection in the Washington Catholic Athletic Conference (WCAC) … Miles selected to sign with ETSU after being recruited by Rhode Island, Liberty, Jacksonville State and Campbell.