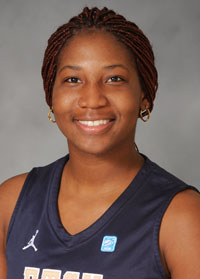 High School: A 5-foot-11 guard/forward from Randolph-Clay High School … saw her stock rise even higher after scoring a career-high 53 points against rival Bainbridge as a senior … following that performance, Rutgers, Georgia and St. John’s entered the recruiting picture, but when it was all said and done, Mitchell turned down the BCS schools to come play for coach Kemp and the three-time Atlantic Sun Champion Lady Bucs … averaged 29.7 points as a senior … also posted 14 rebounds, six steals and four blocks for the Lady Red Devils en route to being named co-Player of the Year in the state of Georgia … along with putting up monstrous numbers, Mitchell also brings a winning attitude to Johnson City, as she helped guide Randolph-Clay to three consecutive GHSA Class A Final Fours.