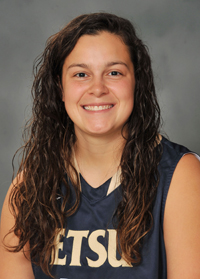 2014-15 Season: Scored season highs of three points on three separate occassions including, most recently, on Jan. 24 vs. Wofford ... played a season-high 18 minutes at Chattanooga (2/28).

High School: Averaged 14.3 points, 4.9 rebounds and 4.0 assists throughout her career at North Greene High ... named to the all-Greene County team three times as well as Player of the Year as a junior and senior ... selected to the all-district team twice and was named Watauga Valley Conference Player of the Year in 2014 ... member of the Tennessee Class A All-State Team in 2013 and 2014 as well as being a finalist for Tennessee Miss Basketball as a senior ... chosen as all-region three times at North Greene and was a finalist for Wendy's High School Heisman in 2014 ... valedictorian of her graduating class at North Greene as well as being a Tennessee Scholar and president of the school's respective chapter of the National Honor Society.