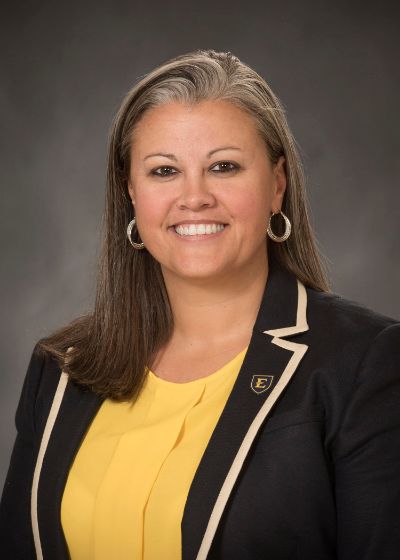 Brittney Ezell became the eighth head coach in the 52-year history of East Tennessee State University Women’s Basketball on May 8, 2013.

Coach Ezell enters her eighth year as the head coach of the Buccaneer women’s basketball program in 2020-21. Since her arrival, Ezell has increased ticket sales revenue by 3,088%. In each of the six seasons since the Buccaneers have returned to the Southern Conference, ETSU has ranked top-three in the SoCon in attendance, placing second during the 2016-17 season with 18,860 total attendees while obtaining a new school record crowd of 6,072.

Ezell is a sought-after public speaker, as she has given the keynote address at IDEAcademy, CitiBank, FellowShip of Christian Athletes Fundraising Banquet, and many organizations around the ETSU campus and Tri-Cities area. She is also a member of the ETSU Standing Women’s Committee and a moderator for ETSU Dinners of Distinction. 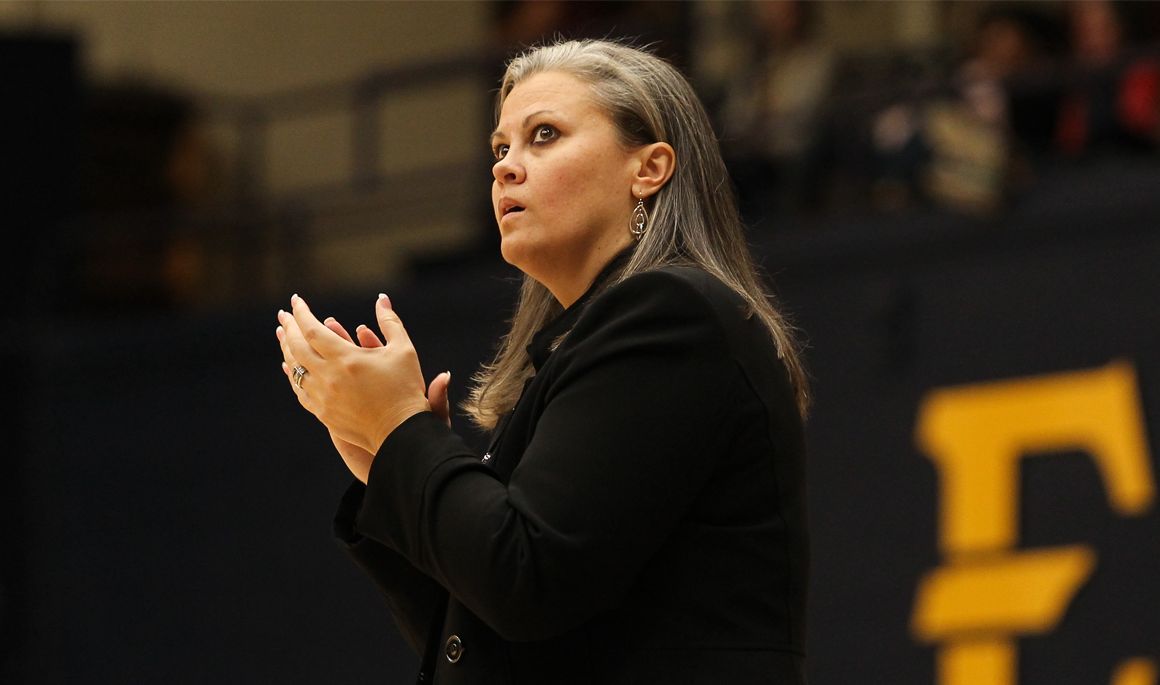 In 2019-20, Ezell and the Bucs achieved a number of personal and program milestones. In their opener against the winningest program in college basketball history, the University of Tennessee, the Bucs packed Freedom Hall to the tune of 5,881 attendees, the second-largest crowd in program history. Having narrowly missed an upset of the Volunteers in a 72-68 final, exactly one month later Ezell's Bucs would down the ACC's Wake Forest at Brooks Gym, the program's first win over a Power 5 school since a 59-50 victory over the SEC's Kentucky Dec. 12, 2008. In conference play, the Blue and Gold would sweep defending league champion Mercer for the first time since the 2014-15 season, while Ezell would pick up her 100th win at ETSU in a 76-49 triumph over Western Carolina Feb. 6. Ezell is the third coach in program history to get to the century mark and enters the 2020-21 season just 17 wins behind the great Susan Yow for second on ETSU Women's Basketball's all-time wins list.

In 2018-19, Ezell once again scheduled a competitive non-conference slate, one that ranked 29th in the country and was headlined by 2017 national champion South Carolina as well as 2019 NCAA tournament teams Michigan State and Rutgers. The high level of competition ensured the Bucs were ready for Southern Conference play, as they finished in the top half of the league standings for the fifth consecutive season, a top-three finish for the fourth time in that same span. Over the course of the 2018-19 crusade, ETSU finished second in the league in scoring (67.8 PPG), led the league in takeaways (8.7 SPG) and finished second in the league in clearing the glass (38.3 RPG).

In 2017-18, Ezell led the Bucs to a 20-13 overall record and finished second in the Southern Conference in both the regular season and postseason. The schedule featured an appearance at the Gulf Coast Showcase where the Bucs opened the tournament with 2018 national champion Notre Dame. In other non-conference action, ETSU hosted Cincinnati in their home opener, Duquesne and Michigan State following shortly after. The Bucs would go on to make their fourth-ever appearance in the WNIT, which marked the team's first appearance in a non-league postseason tournament since 2014-15 (their third WNIT appearance). Also in 2017-18, Ezell helped the Bucs sweep Chattanooga for the first time since the 1997-98 season and guided Tianna Tarter to sign a professional contract overseas.

In 2016-17, Ezell and her staff led the Buccaneers to a 16-14 overall record and went 8-8 in conference action. The non-conference schedule featured rigorous test after difficult opponent for ETSU, which included home contests against Vanderbilt, Old Dominion and the University of Tennessee. Ezell guided Shamauria Bridges and Yamile Rodriguez to sign professional contracts overseas after the conclusion of their seasons. Also in 2016, Tianna Tarter was an All-American nominee under the leadership of Coach Ezell. At the time, Tarter became the 23rd Buccaneer to join the 1,000-point club.

During the 2015-16 season, Ezell guided the Bucs to their third straight winning season including a perfect 6-0 record at home against non-conference opponents. Ezell and the ETSU Women's Basketball program captured a signature victory early in the season when the Bucs defeated Old Dominion on the road. ODU is the eighth-winningest program in NCAA Division I women's basketball history.

In 2014-15, ETSU experienced a tremendous turnaround under Ezell with a 16-game win progression from 2013-14 when the Bucs went 9-21. The total win improvement was the second-best in the country. The 2014-15 win total of 21 marked the first time since the 2009-10 season that ETSU reached 20 wins. Led by Ezell, the Bucs made it to the Southern Conference Tournament Championship game, falling to No.1 seed Chattanooga in overtime, 61-56. ETSU appeared in the Women's National Invitational Tournament (WNIT) for the third time in school history, falling short to NC State, 73-59.

Prior to taking over the Bucs in Johnson City, Ezell spent three years at Belmont in which she navigated the Bruins through their final two seasons as a member of the Atlantic Sun Conference (2011-2012) and inaugural season in the Ohio Valley Conference (2013).

In 2012-13, Ezell directed Belmont to an 18-14 campaign and the Bruins' first postseason appearance since 2007 - a berth in the Women's Basketball Invitational (WBI). Belmont took on a tough non-conference schedule and earned a victory at Big Ten fixture Indiana. Belmont went 11-5 in OVC play, tying for second place in the OVC East and earning the conference tournament's No. 3 seed.

Ezell took the helm of the Belmont program after spending the previous two seasons as head coach at the University of Montevallo. Inheriting a Falcon program that recorded one winning season in its previous 12 years, Ezell directed Montevallo to a 14-13 record in 2009-10. The Falcons also ranked second in the Peach Belt Conference in scoring defense.

Prior to Montevallo, Ezell spent three seasons as head coach at Okaloosa-Walton Junior College (now Northwest Florida State College) in Niceville, Fla. The Lady Raiders went 57-28 under Ezell's watch, which included an appearance in the 2006 NJCAA Regional Tournament. During her tenure, Ezell developed 14 All-Panhandle Conference performers, 12 of whom would go on to sign national letters of intent with NCAA Division I schools. The Lady Raiders also had 12 Academic All-Conference honorees.

Ezell's coaching career began at the University of Alabama, where she spent five years as an assistant coach and recruiting coordinator. She was credited with delivering back-to-back Top-15 ranked recruiting classes for the Tide, with four guards developing into All-SEC players.

Ezell was a four-year starting point guard for the Tide, helping lead the team to a 95-34 record and four consecutive NCAA Division I "Sweet Sixteen" appearances from 1995-98. She ranks in the Top 20 in career scoring, with 1,022 points and is second all-time in career assists (620) and games started (114). She was a Second Team All-SEC selection in 1998 and was named to the SEC All-Tournament Team in 1996. In 1998, Ezell was a candidate for the Francis Pomeroy Naismith Award, given to the top point guard in the country and was named to the inaugural WBCA/Honda All-Star Game for the nation's top 20 players. She was also invited to the WNBA Rookie Combine in Chicago.

Additionally, Ezell became the first female two-sport athlete at Alabama in over a decade when she joined the Tide softball team. A two-time Golden Glove recipient and two-year starter at third base and shortstop, Ezell started at third base for UA's first SEC Tournament Championship team in 1998.

Ezell earned a bachelor's degree in business management from Alabama in 1999 and a master's degree in education administration from the University of Nebraska in 2005. She earned her Doctorate in Global Sport Leadership in May 2018. A native of Franklin, Tennessee, Ezell was a prep standout at Franklin High School. She was a three-time District MVP, tallying over 2,000 points and 600 assists in her career.