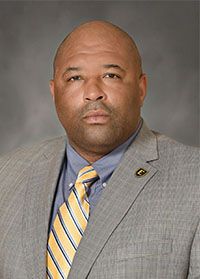 Eric Dumas joins the ETSU women’s basketball coaching staff in June 2015 after one season as an assistant coach at Incarnate Word.

Dumas also spent six seasons as an assistant for men’s coach Brad Jones at Lambuth and served his last season at Lambuth as a women’s assistant for Lori Davis Jones. Dumas served as interim head coach for part of the 2001-02 season for the Lady Eagles who during that season earned a berth in the Sweet 16 of the NAIA Tournament. He also served as the recruiting coordinator and coached the post players.  Dumas helped the men’s team clinch a spot in the program’s first ever NAIA National Tournament in 1999 along with winning the Mid-South Conference Championship.

Prior to entering coaching, Dumas played basketball at Lambuth and earned his bachelor’s degree in health and human performance.