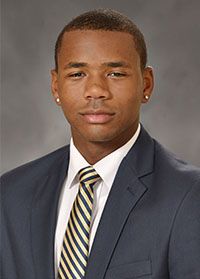 Prior to becoming a graduate assistant, Justin worked as a manger for the women's basketball program since his freshmen year. While at ETSU, Justin has been very involved with campus organizations and volunteering in the Johnson City community.

While in high school at Chattanooga School for the Arts & Sciences, he played basketball with two state tournament appearances his junior and senior season.

Justin graduated from East Tennessee State University in the Fall of 2015 with a B.A. in Finance and a minor in Marketing.