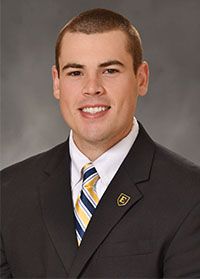 Prior to becoming a graduate assistant, Tyler helped as a team manager during the 2015-16 season. While at ETSU, Tyler earned his bachelor’s degree in finance.

Tyler was formerly a transfer walk-on for the ETSU men’s basketball program, coming from Walters State Community College. At Walters State, Ailshie helped the team advance to the national tournament.  During his prep career at nearby Dobyns-Bennett High School, he earned all-district and all-region honors while helping Dobyns-Bennett advance to the Class AAA state tournament.

Tyler is a native of Kingsport, Tenn. and plans to earn his master’s degree from ETSU in business administration.