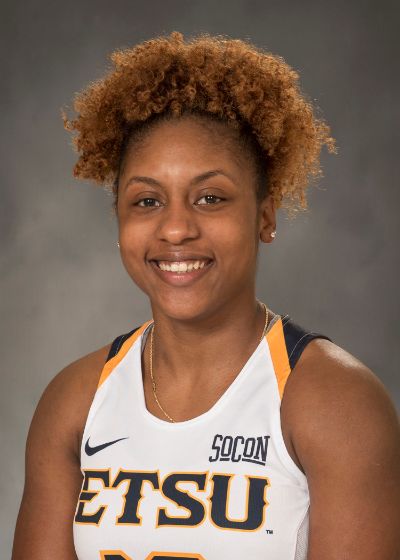 Feature on Craig’s valiant fight to get to the finish line of her collegiate career can be found here.

2019-20 Season (Senior): Missed more than five weeks of non-conference play as she continued recovery from a quad tendon tear that ended her junior season early...18 appearances, five starts and 11.3 minutes per game during her senior season...23 points, 20 assists and 16 rebounds...Made three of seven attempts from outside the arc, raising her career three-point percentage to 34.3...Scored a season-high five points versus Western Carolina in ETSU’s first conference win of the season.

2018-19 Season (Junior): Played in seven games while starting four, leading team in assists before going down with a season-ending injury.

2017-18 Season (Sophomore): Played in 24 games…made a three-pointer in the Bucs’ home opener vs. Cincinnati (11/10)…played in a new career-high 26 minutes at Tennessee, while also recording a career-high five assists (11/12)…scored 11 points and had four rebounds and two steals against Western Michigan (11/26)…registered her first career start at Murray State (11/29)…recorded a new career-high 14 points at NC State including two three’s and making six free throws (12/14)…tallied three rebounds against Samford after missing six games (1/27)…had four points and two rebounds at UNCG 2/1)…finished the season with 35 assists (3rd on the team).

High School: In two years at Winston-Salem Prep, played in 57 games averaging 11.3 points, 4.4 assists and 4.1 steals per game … ranked the sixth best point guard in the state of North Carolina by MaxPreps … helped Winston-Salem Prep capture their first state championship in 2015 … was named 2015 1A All-State and 1-A Northwest All-Conference … during her sophomore campaign, she was named to the 2014 North Carolina Regional Tournament Team.

Personal: Born on February 12, 1998...Daughter of Michelle Richardson...Chose ETSU because she loves the environment and wants to help her team win in any way she can...Majoring in exercise science.