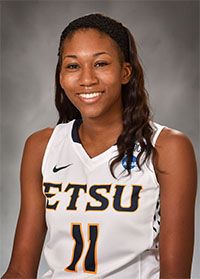 Prior to ETSU: Played her sophomore season at Chipola College, helping the Lady Indians to a 34-1 record and a NJCAA National Championship … in 2015, grabbed 28 offensive rebounds while collecting 36 steals … Played her freshman year at Southern Illinois University … played in six games for the Salukis

High School: Played at Blackman High School … Was a part of 2014 State championship team that was ranked No.1 in the nation by ESPN and No.1 in the state of Tennessee … in her junior year, averaged eight points, three assists, five rebounds and three steals … integral part of 2013 AAU national championship team, Tennessee Flight … at Blackman, Norris complied an overall record of 105-19 while averaging 7.7 points, 4.7 rebounds, 3.1 assists, 3.2 steals and 1.2 blocks.