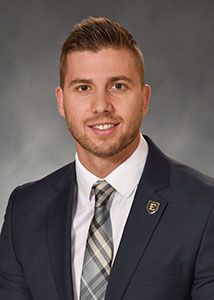 Mike Starke was named to the position of director of basketball sport performance on June 1, 2016. Starke oversees all strength and conditioning efforts related to men’s and women’s basketball, including strength and physical development, conditioning, nutrition and recovery needs for the program.

Since Starke’s arrival in Johnson City, ETSU men’s basketball has averaged over 26 wins per season, while recording two regular season conference titles, three postseason berths, including two trips to the NCAA Tournament. The 106 wins in four seasons ranks 12th among NCAA Division I teams since the start of the 2016-17 season, while it’s also the most wins over a four-year run in ETSU history.

This past season, the Buccaneers set a program-record with 30 wins, becoming just the fourth team in the 100-year history of the Southern Conference to reach that mark. ETSU finished with an overall record of 30-4 and a 16-2 mark in conference play en route to sweeping both the SoCon regular season and tournament titles. The Blue and Gold, who were just one of four NCAA Division I programs to reach the 30-win mark in 2019-20, finished season ranked No. 26 in the Coaches Poll, No. 27 in the AP Poll and No. 2 in the CollegeInsider.com Mid-Major Poll – behind Gonzaga. ETSU also set a school-record for win percentage (.822), which also ranked sixth nationally and ranked eighth in the country with a +13.1 scoring margin.

In Starke’s first season, the Bucs won a share of the SoCon regular season crown, while capturing the 2017 SoCon Tournament and participating in the NCAA Tournament. The 27 wins in 2016-17 rank third all-time in program history, while ETSU’s 16-game win streak in 2017-18 tied the single-season program record and was the longest active mark in the NCAA for a portion the campaign.

During the 2018-19 season, which saw the Bucs use 12 new players that did not see minutes the previous year, the Blue and Gold totaled 24 wins and earned a bid to the CollegeInsider.com Postseason Tournament. ETSU also became the 25th team to win the prestigious Sun Bowl Invitational, and after defeating Norfolk State to win that title, the Bucs recorded their 10th non-conference victory – marking just the fifth time in program history the feat has been accomplished.

Starke was previously at D1 Sports Training Knoxville, where he served as the Head Strength Coach and General Manager of the facility. While at D1, Starke trained athletes including Joe Nathan (MLB) and Wes Roach (PGA).

Prior to D1, Starke was an Assistant Strength and Conditioning Coach at Miami University (Ohio). At Miami, Starke was directly responsible for training men’s and women’s basketball, and assisted with football.

Starke spent two years at the University of Tennessee where he worked for the men’s basketball team as a graduate strength and conditioning coach and earned his Master’s degree in Sport Management. In Starke’s first year with the team, the Vols made a deep run in the NCAA Tournament and advanced to the Sweet 16. During his time at Tennessee, Starke trained NBA professionals Jordan McRae, Jarnell Stokes and Josh Richardson.

A 2013 graduate of Concordia College, Moorhead (Minn.), Starke received a Bachelor’s degree in Exercise Science. While at Concordia College, Starke was a three-year starter at wide receiver on the football team. Starke is a Certified Strength and Conditioning Specialist (CSCS) through the National Strength and Conditioning Association and a Level 1 Performance Coach through USA Weightlifting.

Starke and his wife, Teresa, have three children: Kinsley, Beckham and Oakland.