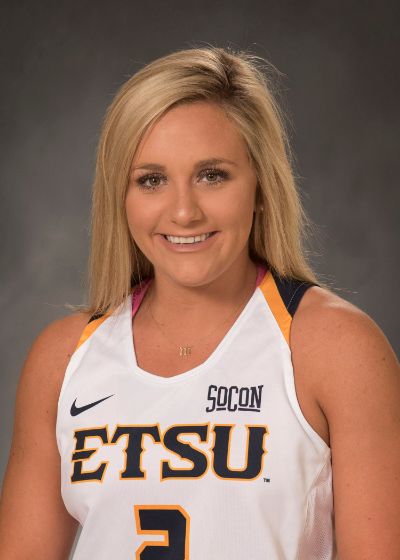 2019-20 Season (Redshirt Junior): Southern Conference Media Second Team All-Conference...Led team in scoring amongst qualifying players, averaging 15.0 points per game, fourth-best in the Southern Conference...3.4 rebounds per game, two assists per game and 31 steals...124 made free throws in 151 attempts were both team-bests and top-100 in the nation...Took 430 shots, 8th-most in single-season ETSU history...22 consecutive games scoring in double-figures from the second game of the year versus Liberty through a February 6 victory over Western Carolina, at one point the third-longest streak in the country...Scored a career-high 26 points against North Carolina A&T in the fourth game of the season only to break that mark five weeks later against South Alabama when she notched 29...On the way to the top scoring day of her career, Scheetz drained 16 free throws, tying the most conversions in a single game in ETSU history...18 attempts in the same game was third-most in a single game in Buccaneer lore...Double-figures in all but three games throughout the year, while setting a career-high with eight rebounds versus South Alabama Dec. 20 and seven assists versus Chattanooga Feb. 1...In the same game against the Mocs, played 53 minutes and 43 seconds in a triple overtime defeat, the second-most minutes played in a game in program history and second-most at the Division I level throughout the 2019-20 season.

2018-19 Season (Redshirt Sophomore): Finished 2nd on the team in scoring with 11.2 points per game, led team in 3-point percentage of players that took more than 5 threes shooting 39.2 percent, good for third-best in the Southern Conference...Led qualifying Bucs in free throw percentage by shooting 77.5 percent...Averaged 12.6 points per game in conference play - in her first 3 games of league action scored 19 points against Chattanooga, 18 against Furman and 21 against Wofford...Scored a regular-season most 22 against UNCG and was one off that mark against Western Carolina scoring 21, while setting a new career high in scoring in the Southern Conference tournament loss to Wofford by scoring 23…Double figures in scoring 10 times in 15 league games, finished the year with four straight double-figure outings...Matched or broke previous career-high of 19 five times throughout season.

High School: Led her team to the 2013 and 2014 State Championship…Named Miss Basketball in 2014 and 2016…2016 Basketball Hall of Fame Inductee…Finished her career with 2,303 points…Averaged 21 points, five rebounds, and three assists per game….Became the first player since Tennessee All-American Glory Johnson in 2007-08 to be named a two-time PrepXtra Girls Basketball Player of the Year.

Personal: Born on June 24, 1998…Daughter of Brian and Kim Scheetz…Chose ETSU because of the coaching staff and the proximity to home...Hopes to help lead the Bucs to a conference championship...Favorite musician is Dolly Parton...Majoring in media communication with a minor in business.